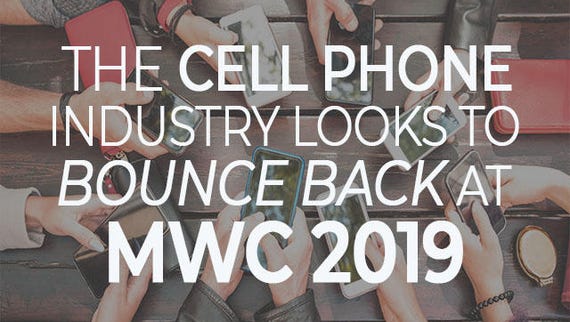 In tech, like in many other areas, nobody really knows anything. That's why, for all the predictions that artificial intelligence, the Internet of Things, augmented reality or 5G would be the things that mattered at Mobile World Congress last year, the device that actually stole the show was a phone that looked like a banana.

Nokia's 8110 4G 'banana phone' turned out to be one of the stars of MWC last year. And with the smartphone industry desperate for something to turn around its fortunes, we can expect more oddities this year, too.

"Globally the smartphone market is a mess right now," said Ryan Reith of tech analyst IDC recently, pointing out that we are holding onto our smartphones for longer, that most of us already have already bought one so finding new customers is getting harder, and that, amidst economic uncertainty, there is growing consumer frustration around continuously rising prices. I'd add another factor — we're becoming bored of what we're being offered. Increasingly it's hard to differentiate between a mid-range rectangle of plastic and glass and a flagship slab of plastic and glass, except by price.

Which is where something like the banana phone comes in. Tech companies need exciting stuff to get us out buying new hardware again. While Nokia's yellow device isn't likely to be copied by too many rivals, expect plenty of foldable phones over the next couple of years — and maybe one at MWC from Huawei, hot on the heels of Samsung. If these devices prove popular, plenty more will follow.

But some tech companies are already looking beyond the smartphone, and it's perhaps significant that one of the big events at MWC 2019 isn't even smartphone-related: it's a look at Microsoft's HoloLens smart glasses.

Still, while odd smartphones and AR goggles are fun to write about, you don't see many people toting either, which means tech companies are going to have to work a lot harder to explain why we need to buy new devices.

5G is going to be everywhere at MWC, and many smartphone makers and network operators will hope that when it arrives it will give the market a much-needed boost by providing a compelling reason to upgrade.

More bandwidth and lower latency will certainly make the mobile experience better — especially for people who like to walk down the street making a video call. There will be plenty of 5G handset announcements and talk about 5G rollouts, although in reality it will be later this year and into next year that 5G will really come into its own. Much depends on when the 5G iPhone arrives, as this will mark the mass-market arrival of 5G — for consumers, at least.

But 5G is about more than that. Although they won't grab the headlines like a foldable phone, there will be plenty of AI, IoT and augmented reality plays on display at MWC. Most of them will rely on the bandwidth and the vast number of connections offered by 5G networks — which will be able to support a million devices per kilometre — to become reality. The recent clash between the US government and Huawei shows how just how important 5G networks will be in future.

The IoT will bring plenty of innovations, particularly for business where the Industrial Internet of Things (IIoT) is ramping up fast. But the combination of AI, 5G and millions of sensors in our homes, watches, cars and clothes is going to create a surveillance capitalism bonanza that society is in no way ready for. If you think data privacy is a mess when it comes to smartphone apps, just wait until you are surrounded by sensors that record your every move and heartbeat. Deciding who gets access to all that data is going to be one of the big decisions we must make over the next few years.

Sure, at MWC all eyes will be on the shiny gadgets; but don't miss the important stuff going on in the background.

Join Discussion for: Your smartphone is going to look a lot stranger...