ZDNet's IT Priorities 2013 panel discussion debated the evolving role of CIOs in Asia as well as the role of ICT as a driver of innovation for organizations in this region.
Written by Eileen Yu, Senior Contributing Editor on March 28, 2013 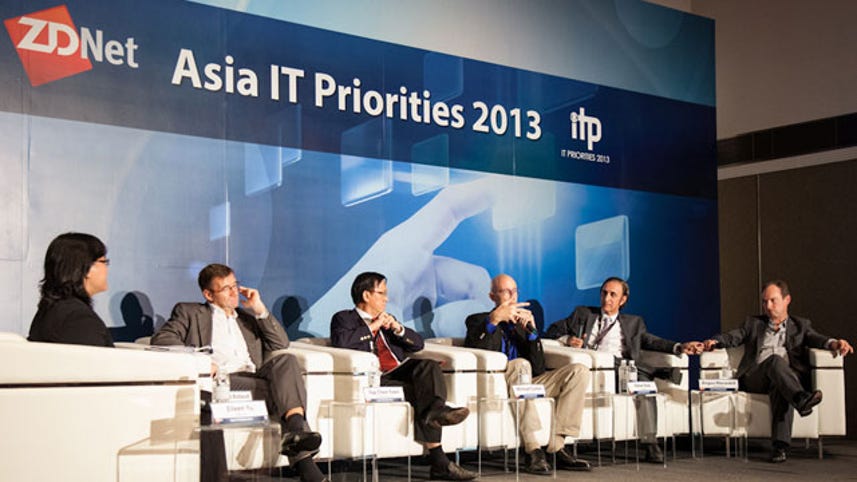 SINGAPORE--ZDNet Asia hosted a panel discussion last Friday to highlight key findings from its annual IT Priorities survey, which looked at strategies, priorities and implementation plans of IT leaders and professionals across the globe including Asia-Pacific, Australia, United States, and United Kingdom.

Conducted online in February 2013, the survey polled 1,236 respondents from the Asia-Pacific region including the Philippines, Indonesia, Malaysia, Singapore, and Thailand.

According to Angus Macaskill, industry analyst from CBS Interactive who generated the report, optimizing customer processes emerged the number one IT priority this year. This indicated ICT was now more focused outside the organization than inside, where just 8 percent of respondents pointed to internal business processes as a priority, Macaskill explained, during his presentation of the survey findings before the start of the panel discussion.

In addition, 75 percent of businesses revealed increases in their external IT spending in 2013. However, only one in four businesses felt ICT was making a big contribution to their performance. The remaining 74 percent viewed it as simply delivering services or helping to improve processes in limited ways.

Majority of respondents, at 40 percent, said ICT was merely helping make specific business processes more efficient and effective. The remaining 35 percent stated ICT was providing infrastructure and applications but focusing on delivering established services without improvements. Just 15 percent said ICT was a primary driver of innovation, transformation, design, and deployment of new business models and services, while 10 percent said IT was closely aligned to the business and constantly creates a competitive advantage in the market.

According to the survey, the CIO's role was also evolving as other C-level executives were now more engaged in driving IT decisions. During the panel discussion, Yap Chee Yuen, executive vice president and head of innovation technology at Resorts World Sentosa, said where the technology budget was concerned, the CIO remained the primary person responsible.

"Typically the CIO will have to work with the team of the CXO to establish the project and budget list. To establish the budget list, it's not a situation where each of the CXOs work on their own tech budget. In the end it's the CIO who integrates all the technology together in response to the CXO's business imperatives," Yap said.

Bertrand Bidaud, managing vice president at Gartner Singapore, noted the CIO played the role of a "hunter", who should introduce to the company technologies, including how and when to leverage them. He pointed out business analytics, cloud mobile communications and other emerging technologies have introduced "discontinuities".

"Certainly the role of the CIO in hunting for innovation today has become more important than a few years ago, due to these discontinuities," Bidaud said.

If you would like to catch key highlights from the panel discussion, watch the eight-minute video coverage or read our report. You can also catch up on last year's IT Priorities panel discussion and compare results.