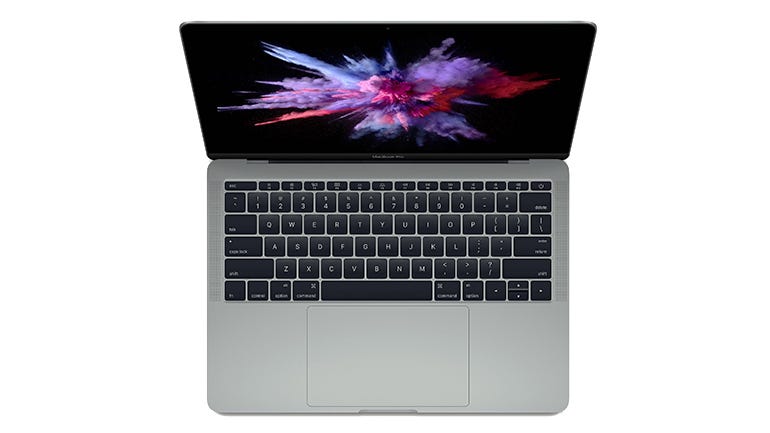 The big headline-grabber when Apple launched its long-awaited update for the MacBook Pro range in October was, of course, the new Touch Bar -- the touch-sensitive glass panel intended to replace the conventional function keys that have been used on computer keyboards since time immemorial (or thereabouts). The Touch Bar will be available on both 13-inch and 15-inch MacBook Pro models later this month, but right at the end of his presentation Apple VP Phil Schiller did a Steve Jobs and slipped in 'one more thing'.

There is one new 13-inch MacBook Pro model already shipping that omits the Touch Bar and has a lower specification than its Pro brethren, and Schiller made it quite clear that this model was intended to provide a more affordable upgrade path for people who currently own -- or might be about to buy -- the ageing MacBook Air.

Up in the Air

Sadly, the term 'affordable' took on an exciting new meaning for the audience in the UK, thanks to the breathtaking price rises that were blamed on Brexit and the plummeting value of the pound. Even this stripped-down 'entry-level' version of the 13-inch MacBook Pro costs a hefty £1,449 (inc. VAT, or £1,207.50 ex. VAT) in the UK -- almost direct parity with the US price of $1,499 -- while the Touch Bar models will start at £1,749 (compared to $1,799 in the US).

The basic design of the 13-inch MacBook Pro looks quite familiar, with Apple's now traditional aluminium unibody design available in either Space Grey or Silver. However, this 2016 edition has slimmed down and lost quite a bit of weight. It weighs just 20g more than the MacBook Air at 1.37kg, although it's actually smaller, at 304mm wide by 212.4mm deep by 14.9mm thick, compared to 325mm by 227mm by 17mm for the MacBook Air. In contrast, the previous generation of MacBook Pro measured 314mm by 219mm by 18mm, and weighed 1.58kg. Incidentally, that 2015 version of the MacBook Pro is still on sale, but while it originally cost £999 (inc. VAT) its UK price has now been increased to £1,249 (compared to $1,299), which gives you some idea of the price rises facing UK buyers.

We like the larger trackpad on the new MacBook Pro, which measures a spacious 135mm by 85mm, although the slimline keyboard panel means that it now uses a 'butterfly' switch mechanism similar to that of the ultraportable MacBook that was introduced in 2015. This isn't quite as flat and unresponsive as the keyboard on the MacBook, but I do still prefer the greater travel provided by the keyboard on my own MacBook Air.

In most other respects, though, the Touch Bar-free 13-inch MacBook Pro is clearly a step up from the MacBook Air. Its 13.3-inch display retains the 2,560 by 1,600 resolution (227ppi) of its MacBook Pro predecessors, and leaves the paltry 1,440 by 900 resolution (127ppi) of the MacBook Air looking seriously out of date. Apple also claims that this display provides 67 percent greater brightness and contrast than previous MacBook Pro models, as well as supporting the DCI-P3 colour space for high-end photo- and video-editing. Its excellent all-round viewing angles will also work well for business users who need to give the occasional impromptu presentation in a coffee shop.

Even so, the Touch Bar-free 13-inch MacBook Pro needs to be more than just a pretty face in order to justify the £500 price premium over the MacBook Air. The £1,449 version of the 13-inch MacBook Pro is based on a 2.0GHz dual-core Intel Core i5-6360 processor (up to 3.1GHz with Turbo Boost), along with 8GB of RAM and a 256GB solid-state drive. That combination produces respectable single-processor and multi-processor scores of 3383 and 7184 when running the Geekbench 3 benchmark, which certainly puts it well ahead of the 2594 and 5574 scores delivered by the current MacBook Air (switching to the newer Geekbench 4 gave scores of 3497 and 7298, along with 28,497 for the new graphics tests.)

However, we've seen Windows rivals, such as the ASUS ZenBook UX330UA that manage similar scores -- 3323 and 6983 in GeekBench 3 -- for a price of around £1,000. In addition, the reliance on Intel's Iris 540 integrated graphics is disappointing in a laptop costing the best part of £1,500. To be fair, Iris puts on a good show, managing 35.5fps when running the Cinebench R15 test suite, but that score is matched by the 38.3fps of the more affordable ZenBook. That level of performance will be more than adequate for many users, but it's still not what we'd expect from a 'pro' laptop in this price range.

The Touch Bar-free 13-inch MacBook Pro did have one surprise up its sleeve, though. It has a more modest CPU than the Touch Bar models that are arriving soon, and this allows it to deliver impressive all-day battery life. With the screen brightness turned down to a still perfectly viewable 50 percent, the 13-inch MacBook Pro gave us a full 500 minutes -- 8 hours and 20 minutes -- of streaming video on the BBC iPlayer. That's not quite in the same league as the MacBook Air, whose low-res display allows it to run for 11 hours, but it's a full two hours longer than the battery life of the previous generation of MacBook Pro, while the ASUS ZenBook only lasted for 6.5 hours.

It may not have the high-tech bells and whistles of the other 2016 MacBook Pro models, but the Touch Bar-free 13-inch MacBook Pro is certainly an attractively designed laptop, and it does fit its niche as a kind of 'MacBook Air Pro' upgrade. It delivers better performance and display quality than the MacBook Air, while still maintaining all-day battery life. The sting in the tail, though, is that much higher price tag. Given the pent-up demand for MacBook Pro updates, the Touch Bar-free 13-inch MacBook Pro may well prove an attractive option for users who want to replace an older Apple laptop. However, the Brexit-induced price rises for the new MacBook Pro models may prove hard for Apple's UK fans to swallow.