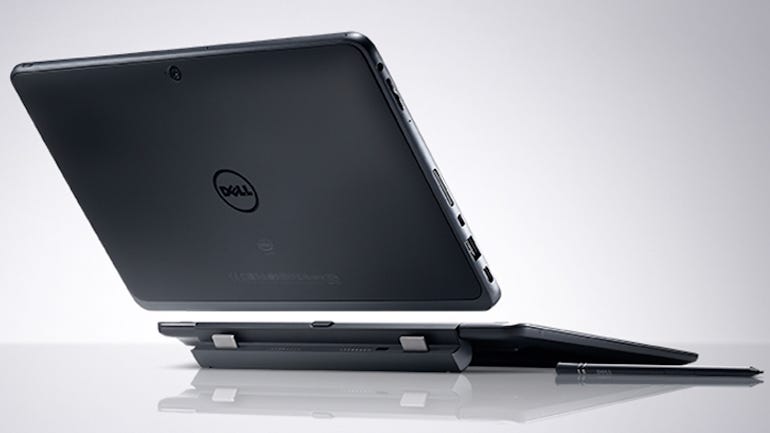 The Latitude 11 5000 Series uses the classic detachable-screen laptop design comprising a tablet section, with all the ports and connectors in its casing, and an attachable keyboard to enable document creation and editing. The tablet and keyboard are sold separately, and there are two options for the latter: the Dell Latitude 11 Slim Keyboard costs £169.31 (inc. VAT, or £141 ex. VAT), while the Dell Latitude 11 Keyboard (sent for this review) costs £218.15 (inc. VAT, or £182 ex. VAT).

The tablet variations are plentiful: as well as the usual variants on processor (both Core M3 and Core M5 Skylake variants are available), and storage (128GB, 256GB or 512GB SSD), and RAM (4GB or 8GB), it is possible to select self-encrypted SSDs, a fingerprint scanner and a smartcard reader on the tablet. These latter options are what lead Dell to claim that the Latitude 11 5000 Series is "The world's most secure 2-in-1 for business".

For a 10.8-inch tablet this is a relatively weighty device, starting at 710g for the 5175 models and 760g for the 5179 models. The tablet is on the chunky side too, with a desktop footprint of 280mm by 175mm. My review unit, with its integrated smartcard reader and fingerprint sensor, was 14.3mm thick, while the 5175 models just sneak under 11mm.

I was able to bow the tablet slightly without applying a great deal of force. There's some airspace behind the screen back on the smartcard-equipped models that allows the back to flex inwards and creak a little. Pressing down hard on the back caused some feedback on the screen. A protective carrying case may be necessary, despite the use of magnesium alloy in the chassis.

There is quite a lot of bezel, which makes it easy to hold the tablet without accidentally activating the touchscreen. That's useful, but large bezels always look incongruous when you're working in laptop mode. The screen is protected by Corning Concore Glass and is quite reflective.

The display resolution of 1,920 by 1,080 pixels (204ppi) is standard across all 12 Latitude 11 5000 models. It's not difficult to read, but given so many variants I'd like to see a couple with higher resolutions. The screen does go very bright, which should help those wanting to use this device outdoors.

Ports, connectors and buttons are ranged around all four sides of the tablet. The power button, a small status light that illuminates when the tablet is charging, and a microphone are on the top (in landscape orientation). The left edge has a headset jack, a volume rocker, another microphone, a speaker, a Micro-HDMI connector, a full-size USB 3.0 port, and a USB Type C port. The latter is used for charging, and also provides connectivity for docking, video, audio and data.

On the right edge there's a Windows button, a second speaker and, under a hinged cover, slots for Micro-SD and Micro-SIM cards. There's an NFC sensor area on the back of 5179 models, but this is lacking on the more basic 5175 variants.

Sound output through the stereo speakers is reasonably good. Top volume is loud enough to reach around a small table and audio quality is adequate -- if inevitably treble-heavy and bass-light.

The optional Dell Latitude 11 Keyboard is robustly built and adds a second battery to boost the mains-free longevity of the 2-in-1 combo. The battery makes the keyboard rather heavy, and raises the overall system weight to 1.48kg, which is quite substantial for a 10.8-inch device. The overall footprint is increased too, as the keyboard hinge protrudes some 15mm from the back of the chassis when the laptop is closed.

The tablet and keyboard are held together very securely by two metal lugs on the keyboard section. I was not concerned that they might part company, even if I lifted the whole thing up by one of the top corners of the tablet. Tablet and keyboard are separated by pushing a catch in the centre of the hinge, which draws the locking mechanism back. The hinge does not fully rotate, but takes the tablet to an angle of about 120 degrees. That's good enough for typing, but doesn't offer the flexibility of laptops with 360-degree screens.

The keys are well spaced and reasonably comfortable to use, although there's not much travel and the overall feel is a little less responsive than I'd like. There is a two-level backlight, which helps when you're working in dim light.

My main issue when typing was with the Enter key (see above). Although it's a double-height key, the bottom half is half-width, and it took me a little while to acclimatise and hit it accurately every time. (Photographs at Dell's website show a different key design, with a horizontally oriented single-height Enter key.)

Those who make frequent use of the trackpad may find it a little on shallow. There's not much Dell could have done about that, though: creating more depth for the trackpad would have meant reducing the spacing between the keys or significantly reducing the height of the Fn key row -- or most likely both of these.

There is a stylus in a housing on the right edge of the Latitude 11 Keyboard. This is thin but well weighted, and its internal battery charges while it's in the housing. I do wonder whether housing the stylus on the tablet itself might not be preferable -- a key stylus use case is data entry in tablet mode, after all. In laptop mode you can't rotate the screen fully to face outwards, nor can you reverse the screen docking orientation to achieve the same end.

Apart from the stylus housing there are no ports or connectors on the keyboard, and its edges have been styled with a neatly curved design. The dull rubberised finish on both keyboard and tablet is quite grippy, but after just a couple of hours of use it had attracted greasy fingermarks.

Dell doesn't quote a battery life on its UK website for either the tablet or the keyboard. When the keyboard is attached its battery is used first, so the tablet always has the maximum charge left when it's detached. In our experience you should get an 8-hour working day out of the tablet/keyboard combo under relatively light workloads. As an example, three hours of document creation and web access in laptop mode reduced the keyboard battery from 100 percent to 40 percent, while the tablet battery dropped by just 1 percent.

Dell's Latitude 11 5000 Series tablet, when combined with an optional keyboard, becomes a capable small-format business laptop -- particularly with the higher-end security features on the 5179 models. However, the price seems high for what's on offer here, and there are some niggles, including the lack of 360-degree screen rotation, the rather hefty weight of the tablet/keyboard combo and the moderate screen resolution.