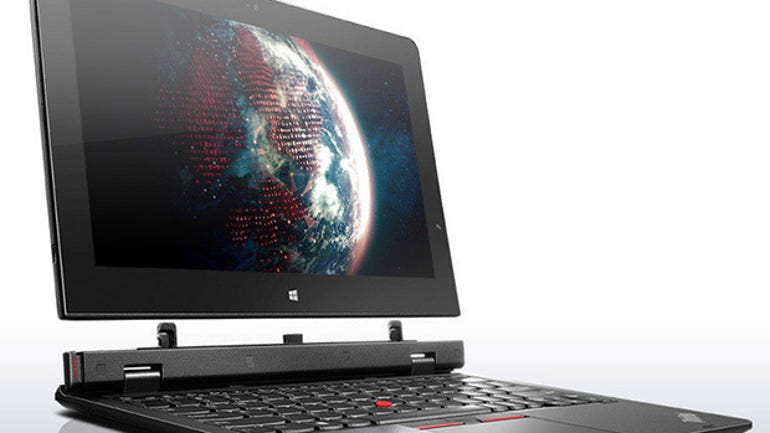 The new second-generation ThinkPad Helix updates the internals, including an Intel Core M processor, and offers a choice of keyboards which really isn't a choice at all.

Lenovo has brought the ThinkPad Helix bang up to date with the new model. As before, it's a small, neat ultrabook whose lid and keyboard sections separate to give you a lot of flexibility in how you do your computing.

The two keyboard options also have an effect on size and weight:

We were sent the top-end model (see below), which comes with the Ultrabook Pro keyboard -- and from what we've seen it'll be an essential upgrade for cheaper variants that come with the standard keyboard, which has a single-position slot for the screen rather than a hinge mechanism and lacks a locking system.

This is not a particularly elegant arrangement, nor does it offer the multiple modes that Lenovo shows on its website and which are the fundamental reasons for choosing the ThinkPad Helix. We also wonder about the weight distribution with the standard keyboard. Our experience with the heavier, battery-equipped Ultrabook Pro keyboard was not particularly stable: prodding and tapping at the screen when working in laptop mode tended to cause a little backwards tipping unless the keyboard was anchored with a free hand.

We think that by offering the standard Ultrabook keyboard Lenovo is doing the ThinkPad Helix no favours. The Ultrabook Pro should be the only keyboard on offer.

With the Ultrabook Pro keyboard you can work in several configurations (see images, right): Laptop, in standard clamshell mode; Tablet, with the keyboard detached; Stand, with the screen facing outwards and away from the keyboard; and Tent, using the two front edges of the ultrabook as a stand.

Unfortunately the hinged section does not push much beyond a right angle to the screen, so to get to tent mode you must remove the screen and reinsert it facing outwards. This is somewhat fiddly compared to the much more flexible hinge of Lenovo's Yoga 3 Pro.

Thankfully the tablet detaches easily: a pair of hinged locks fall into place automatically when you push the tablet into its housing channel. To release these you just push a catch on the right side of the dock section and lift the tablet free.

The 11.6-inch Full-HD (1,920-by-1,080, 190ppi) IPS screen sits in a wide bezel that's necessary for working in tablet mode but, as usual with detachables, looks a bit out of place when docked. The screen is very reflective and we found it difficult to work with sunlight streaming through a window to our left.

The screen is touch responsive, and Lenovo provides a digitizer pen, for which there's a slot on the back of the standard keyboard. If you choose the Ultrabook Pro keyboard, you'll have to fix a small elasticated pen holder to the left edge of the keyboard, which looks neither elegant nor particularly secure.

The keyboard is necessarily a little cramped, but the Lenovo layout and design quality remain intact. There's plenty of travel on the keys, and our relatively small hands found it very comfortable to work with. The usual conventions of a user-controllable keyboard backlight toggle on the space bar and a three-button TrackPoint are present and work well.

Lenovo powers the second-generation ThinkPad Helix with Intel's relatively new Core M processor. With its 14nm manufacturing process this is more energy-efficient than the Core i5 processor that powered the original ThinkPad Helix, but not as powerful as more recent Core i3, i5 and i7 processors. Graphics performance, in particular, can suffer, as is apparent in the system's Windows Experience Index rating (see below).

There are three off-the-page ThinkPad Helix configurations on Lenovo's UK website, all of which can be tweaked to meet specific requirements:

Note that only the top-end model comes with the Pro keyboard: you'll have to add £190 (inc. VAT) to the price if you want it with the other two variants. 802.11ac wi-fi and Bluetooth 4.0 are present across the board, as is mobile broadband support via a Micro-SIM slot on the tablet section.

You don't expect to see a huge range of connectivity options on an ultrabook, and Lenovo has the added complication of needing to offer as much as possible on the thin (9.6mm) edges of the tablet section so that they can function independently of the keyboard.

Consequently there are just a couple of connectors on the back edge of the Ultrabook Pro keyboard: a full-size USB 2.0 port, a DisplayPort and a Mini-USB style power input.

There is a second charge connector on the tablet's left edge, while the top edge has a small and somewhat fiddly on/off button plus a button to enable or disable toggle automatic screen rotation.

The right edge houses the remainder of the ports and connectors. There's a headset jack and Micro-HDMI port, while the Micro-SIM slot sits alongside a Micro-SD card slot beneath a hinged tab. A further hinged tab protects the ThinkPad Helix's single, full sized, USB 3.0 port. Ethernet is available via a (provided) USB dongle.

Intel's Core M processor is no match for the latest Core ix chips, and the new ThinkPad Helix's Windows Experience Index (WEI) results bear this out, with relatively low scores for processor and graphics performance.

Lenovo's second-generation ThinkPad Helix is a compact and competent ultrabook. Intel's Core M processor delivers a good balance between power and battery life for mobile professionals, although such users may not appreciate the highly reflective screen.

There's little point in buying this system without opting for the Ultrabook Pro keyboard. This boosts the price by £190, but adds extra battery life and the flexibility of different usage modes.