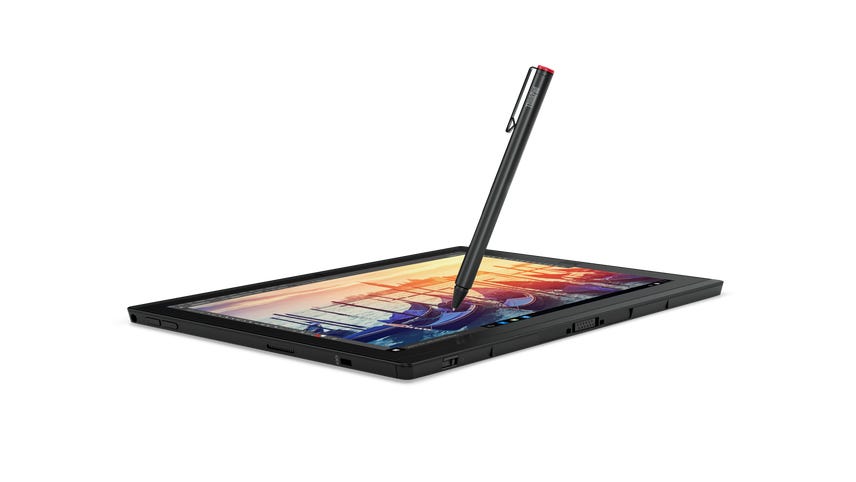 Lenovo has never stinted on the ThinkPad X1 Carbon, its flagship thin-and-light business laptop. This year the company has expanded the X1 range, which now includes the modular ThinkPad X1 Tablet and the convertible ThinkPad X1 Yoga with OLED display. The ThinkPad Carbon X1 has also had an upgrade, the fourth-generation version being "the world's lightest 14-inch business ultrabook," according to its maker.

ThinkPad laptops have a certain 'design icon' status about them. The matt-black chassis, silver 'ThinkPad' on the lid with the red-LED 'i' dot that pulses when the notebook is sleeping are simple, useful and distinctive visual elements.

All these elements are present in the 4th-generation ThinkPad X1 Carbon, which has a starting weight of 1.21kg. Rather than the weight, it's the extreme slimness of this laptop that I noticed first and found most appealing. Measuring 1.64cm along the back edge and tapering towards the front, and with a footprint of 33.3cm by 22.9cm, the ThinkPad X1 Carbon is no problem to stow in a backpack.

The chassis is made from carbon fibre, so you can probably get away with carrying this laptop without a protective sleeve. That said, the lid and base are relatively easy to prize apart, so beware of detritus in your bag that might squeeze its way between screen and keyboard -- a stray paperclip, for example, can do significant damage.

Open the lid and more distinctive ThinkPad features are revealed. The red trackpoint is accompanied by three buttons that sit above the touchpad, the central button offering a scroll function. The buttons on the touchpad itself are embedded. I found two-finger zooming on the touchpad a little jerky for some reason, but everything else involving pointing devices was smooth and responsive.

The keys are large, and there's plenty of travel -- some people might even feel they rise and fall a little too much. They're well spaced, and also backlit -- two levels of brightness are controlled by the Fn key-spacebar combination. My review unit had a fingerprint reader on the wrist rest, although it's not present on every model.

The ThinkPad X1 Carbon is one of those old-fashioned laptops whose screen doesn't rotate fully. You can push it back 180 degrees to rest flat on a table, but that's as far as it will go. If you want a ThinkPad X1 with full 360-degree rotation, you'll need the Yoga version. Nor is the 2016 X1 Carbon's screen touch sensitive -- last year Lenovo released two touchscreen models, one of which we reviewed. Again, look to the X1 Yoga if you want a touchscreen (and pen support).

There are two options for the 14-inch screen. On the two less expensive models you get a 1,920-by-1,080-pixel (157ppi) IPS screen, while the two higher-end models, which include my top-of-the-range review unit, have a 2,560-by-1,440-pixel (210ppi) IPS screen. The matte finish makes this a great screen to work with, although I found horizontal viewing angles a little lacking unless the display was set to maximum brightness.

Working with the screen at maximum brightness will, of course, put greater strain on the battery, so you'll need to think about the trade-off here. Lenovo says the 4-cell battery will give you up to 11 hours of life, but anecdotal evidence suggests this is rather hopeful.

On one occasion, after three hours of relatively low-level use but with the screen at maximum brightness for about half the time, the battery was down to 69 percent and the ThinkPad's own battery gauge suggested there was just 3 hours 30 minutes of life remaining.

Lenovo's Power Manager app includes a slider which you can use to move between higher performance and longer battery life. For me, anything over half way towards the maximum battery life side reduced screen brightness to an unworkable level.

You can fiddle with the base configurations. For example my review sample arrived with Windows 7 Pro installed, which is available through downgrade rights. You can also boost SSD storage up to 512GB, with both SATA and faster PCIe NVMe options on offer.

There's a 720p webcam above the screen, flanked by dual array microphones. My review unit had a MicroSIM card slot under a cover on the back edge, which also protects a MicroSD card slot.

Lenovo has been slightly more generous with ports on this year's ThinkPad X1 Carbon than with its 2015 predecessor. There are three USB 3.0 ports rather than two as before, plus a full-size HDMI port, a Mini-DisplayPort and a 3.5mm headset jack.

A Lenovo OneLink+ connector allows you to attach the provided RJ-45 Ethernet adapter. If you need more ports, you can also use this connector to attach a OneLink+ Dock, which will cost you an extra £154.80 (inc. VAT). The ThinkPad X1 Carbon also supports WiGig and Lenovo offers a WiGig Dock, allowing for wireless access to dual HD displays, mouse and keyboard, USB storage and Ethernet. This sounds convenient, but comes at a price: £261.60 (inc. VAT).

If you're looking for big changes in the 4th-generation ThinkPad X1 Carbon, you'll be disappointed: it's much more about updating the 2015 model than breaking new ground. That's not necessarily a bad thing, but there is one area where Lenovo should be striving for better performance: battery life.

Still, this is another impressive ThinkPad X1 Carbon from Lenovo, albeit one that's distinctly evolutionary. We're keen to explore whether the ThinkPad X1 Yoga, with its OLED touchscreen and pen support, moves Lenovo's premium business ultrabook line up a notch.