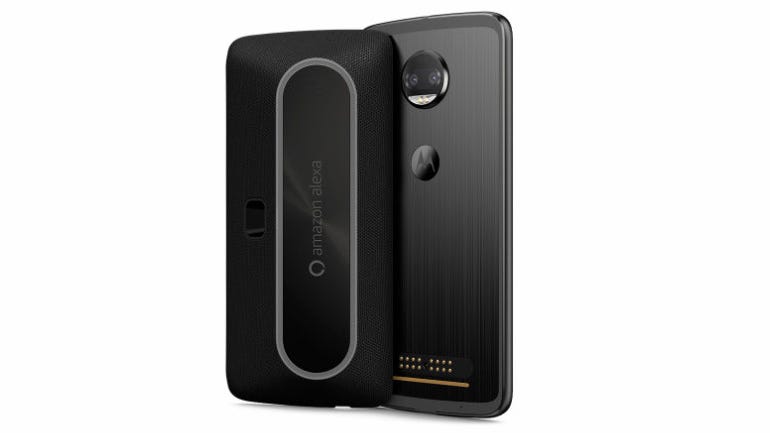 Motorola's Moto Z range of smartphones all have a set of contacts on the back for attaching modules, or Mods, allowing the handset's functionality to be extended.

The Smart Speaker with Amazon Alexa launched at the same time as the printer. It provides stereo speakers to amplify the sound from whatever Moto Z handset it's attached to and, as its name suggests, gives you access to the Alexa digital assistant.

A strip around the Mod's base lights up blue when you're in conversation with Alexa, just as with Amazon's Echo devices. This base is offset so that it stands the Moto Z at an angle. So, when you ask Alexa if it's going to rain, and you get a spoken answer and a viewable weather forecast, it's easy to see the visual information at a glance.

The Smart Speaker is bulky (153.2mm x 73.2mm x 22.8mm), and heavy (168g), and when in place it hampers the phone's general usability in any position other than sat flat on a table. To take a photo, for example, you need to remove the smart speaker. If you're going to take this device travelling, it'll most likely be carried in a bag separate from the phone -- but it doesn't come with a carry pouch.

So the Smart Speaker with Amazon Alexa is best considered as a 'stay at home' device, and its built-in 1,530mAh battery will keep it going for up to 15 hours. Like other Mods, it charges through the handset, but also has its own USB-C connector, so it can be charged independently, or the handset charged through it. Four LEDs on its flat connecting side show how much charge is remaining.

The Smart Speaker's listening skills are not as refined as they could be. Its four far-field microphones picked up my voice across my front room if I raised it slightly, but if the TV was on it failed to hear me across the same space.

Alexa isn't an ideal solution for voice-controlling a Moto Z handset. Take music playback, for example. It'll play music, but only what's available on Amazon's services: it won't find and play YouTube music and videos. Nor will it open apps, send a text to a friend saying you'll be late, or start a phone call.

It doesn't seem to use location information consistently, either. When I wanted to find out what films were on locally, Alexa refused to recognise me speaking the name of several local areas. Maybe I was garbled. When I simply asked what films were on it used my location to deliver a spoken list of films, cinemas, and showtimes. But when I asked for a map of local cinemas, Alexa told me it didn't know where I was.

The speaker itself is OK, but not fantastic. It's much more punchy and bassy than the speaker in the Moto Z2 Force I used to test the mod, but there's some distortion at full volume. Audio quality is better when the volume is dialled down slightly, and it's still loud enough for general enjoyment.

There's a quickstart guide in the box, but this just shows you how to attach the Smart Speaker and where to find the user guide online. Motorola should simply include a sentence saying 'install the Moto Alexa app' as, once installed, the app runs you through setup.

The Moto Smart Speaker with Amazon Alexa has its issues. We found the Alexa app's utility limited, and the Mod itself is a chunky add-on to your Moto Z handset. It also costs a hefty £99 -- not much less than Amazon's compact, screen-equipped Echo Spot (£119.99).

With some refinement, including better integration with Android apps and more use of the screen to deliver information, this Mod could work quite well. If nothing else, it might serve as a handy charging dock with added benefits. But it could also use a price cut. And going back to the speaker functionality for a moment, if you're impressed with the concept, then the JBL SoundBoost Speaker offers this facility alone, in a slimmer Mod, with up to 10 hours of battery life, for £55. And you can use the handset's camera through its peephole. 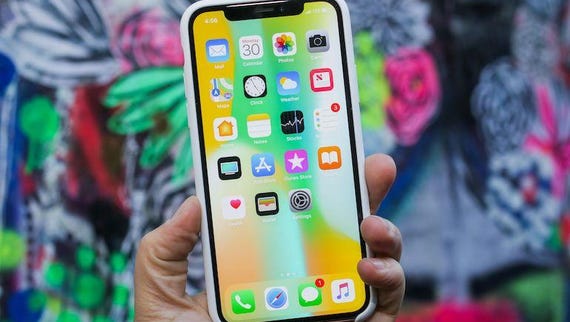 Print photos on the go with the Polaroid Insta-Share Moto Mod: hands-on
Many of us remember using a Polaroid camera and shaking the print in a futile attempt to see the photo develop right before our eyes. The new Moto Mod brings a similar camera image to print experience for Motorola smartphone owners.

Moto 360 Camera, First Take: An all-round view for Moto Z-series owners
This 360-degree add-on Mod for Motorola's Z-series smartphones is fun to use, but has some limitations.

Motorola Insta-Share Projector, First Take: Big-screen Mod for your Moto Z
Clip this 120g pico-projector onto the back of a Moto Z handset, and you can project smartphone content onto a screen up to 70 inches in size.