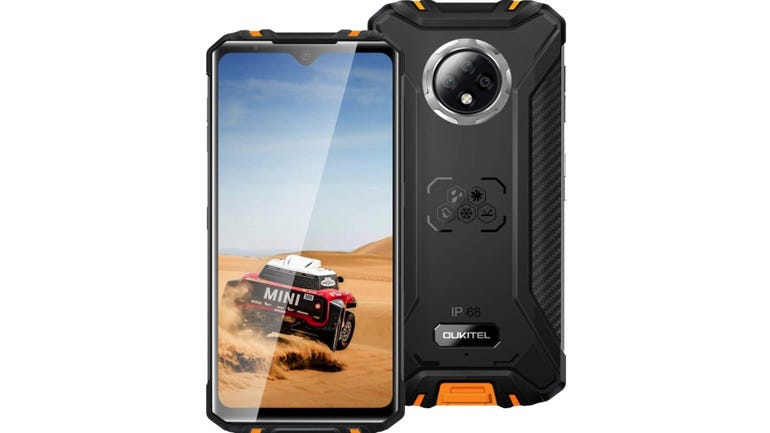 The Oukitel WP8 is the first smartphone i have reviewed from Oukitel – it is not a familiar brand to me. However, this manufacturer builds both rugged and slimline phones with nice form factors and an array of multi-lens cameras.

Inside the box there is the phone, a SIM pin, an OTG cable and a micro cable and charger. There is also a quick start guide.

On the right-hand edge of the WP8 there is the SIM card slot, the power key and the fingerprint sensor, The left hand side has volume buttons and a configurable smart button.

The headphone jack is sealed beneath a silicone cover at the top of the device, and the charging port is at the bottom of the phone.

It is pretty light too at 260g. The Cubot Quest phone is slimmer at 8.8mm thick, and lighter at 213g. However, its screen size is only 5.5 inches

Inside the phone which runs Android 10 there is a MediaTek MT6762D octa-core chip with four cores running at up to 1.8GHz, and four at up to 1.5GHz.

The device comes with 4GB RAM and 64GB ROM and it has a nice large capacity 5000mAh battery to keep you going for more than a day. It also has NFC.  There is a Nano SIM slot there and space for a TF card – or another SIM card

The front camera has 8MP fixed focus with and aperture of f/2.2. images are good – there is a bokeh option to blur the background in the rear camera and a beauty option to brighten up your appearance before taking an photo.

Post image manipulation is basic and adequate. Images are good, clear and sharp and shutter response is good.

The WP8 is certified IP68 and IP69K – to military standard 810g. This means that the phone will still work after immersion in water of up to 1.5m deep for up to two hours without issues. The MIL-STD 81g test also means that it has passed low pressure testing, acidic atmosphere, humidity and solar radiation tests.

The side button on the left hand side can be customised to operate a shortcut, or open an app with a click, a long press, or a double click. I like the custom buttons which are useful to quickly invoke my camerafor action shots.

The UI is clean and simple – with non of the bloatware installed by some other manufacturers. The extra nice-to-have is the ToolBag with a compass, sound meter, spirit level, gradient monitor, magnifier, protractor, plumb bob, and areally useful warning icon.

This Warning feature means that if you are in a jam, you can touch the flash icon to get the camera LED to flash on and off. Touch the screen icon and the screen flashes blue, red, yellow, and green to attract someone's attention

There is also a warning option. Touch this and a very loud siren will go off to attract attention. A really nice idea.

In addition to fingerprint recognition you can use facial recognition which works well – even in low light.

You can also configure an SOS call. Add up to three contact numbers and send a distress message if you press the power button five times

All in all, the Oukitel WP8 Pro is an affordable rugged phone which is suitable for work or leisure.

As its waterprooof and rugged your kids will not be able to drown it, and it has some really useful features if you use it outside for work. At $139.99 it is a really affordable rugged device for anyone