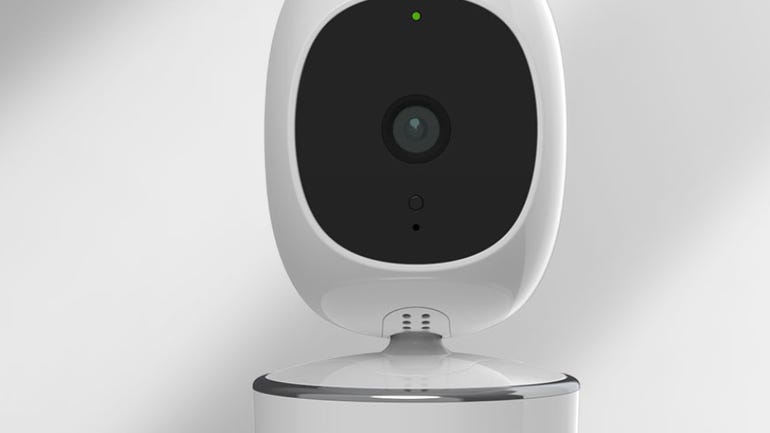 The Simcam 1S security camera is solid with a nice look and feel to the camera body. It is slightly smaller than the Netvue Orb 1080p I looked at earlier this week, a similar size at 0.5 pounds, but has more sophisticated functions.

The 1S is IP54 rated, which means that it is protected from a low amount of dust, and can cope with water splashing. However, it certainly needs to be protected from the full force of the weather.

The camera can be positioned on a flat surface to monitor the space or mount on a wall or ceiling with the aluminum bracket.

Inside the box, the SimCam 1S has a power adaptor and 10ft lead. There is also a wall mount pad, wall plug anchors, screws, a hex wrench for positioning, a sticky pad mount, an SD card, and the camera.

The SD card is a nice feature; neither the $34.99 Netvue Orb camera, or the $46.99 Netvue Vigil camera has an SD card included. The SD card for the SimCam is placed into its slot, which is covered with a plate secured by the hex wrench.

As soon as the power lead is plugged in, the camera starts to record and store 30fps videos on the SD card.

You use the app to connect to the information on the card or use your own card (up to 128GB) over both 2.4GHz and 5GHz Wi-Fi. It does need 2Mbps upload speed to upload images to the app.

The nice thing about the SimCam 1S is that you do not have to purchase a cloud subscription for storage. Set up your NAS to back up your images instead.

The camera easily connects to the app and is simple to install using the QR code in the user guide or by searching for 'SimCam camera' in the App Store.

To add the camera to the app, connect the app to your home Wi-Fi, and point the mobile device at the QR code on the base of the camera.

The camera says 'connected' to confirm a successful connection. The app, however, does not seem as polished as the Netvue app and seems like less development time has been spent on the UI

It uses in-camera AI to reduce false alerts and prevent motion detection glitches and has a 4x digital zoom.

It will detect movement of a person up to 60 feet away and recognize who or what causes the motion detection alert, pushing a message to the app.

Its facial recognition works at a distance of up to 18 feet, analyses images at 100fps, and will detect a human image within 30 milliseconds.

The app will match the person to a preloaded set of family and friends to prevent false alerts.

If it is mounted facing your drive, it will alert you when a car enters up to 20 feet away or leaves your garage.

It will also alert you when your cat or dog passes in front of the camera (up to 10 feet away) so you can see what they are doing.

The camera uses a two-way microphone so you can talk and hear anyone in the room being monitored with good sound quality.

You can talk to your cat or dog when you are out of the house.

The SimCam 1S will also notify you if an object in the camera's field of view is moved, and sound a 100dB siren if you choose.

I like that the SimCam 1S will work with tools such as IFTTT to control home devices using person detection or facial recognition.

As you arrive home, a pre-configured set of rules can invoke the responses from your smart home devices, to dim the lights, turn on the TV/radio.

You can also use Alexa or Google Assistant to show the camera images and turn off alert detection when the camera recognizes you coming home with its geofencing feature.

The camera has starlight night vision 850nm infrared LEDs, which will show a person's face up to 50 feet away in total darkness. It has an ISP sensor to improve low light details.

The app lets you share the camera across the family so that they can also receive alerts from the camera.

All in all, SimCam 1S has some clever features if you want to take your home monitoring to the next level with facial recognition, smart home integration, and geo-fencing.

For under $130, the SimCam 1S camera is a very nice addition to your smart home gadgets.