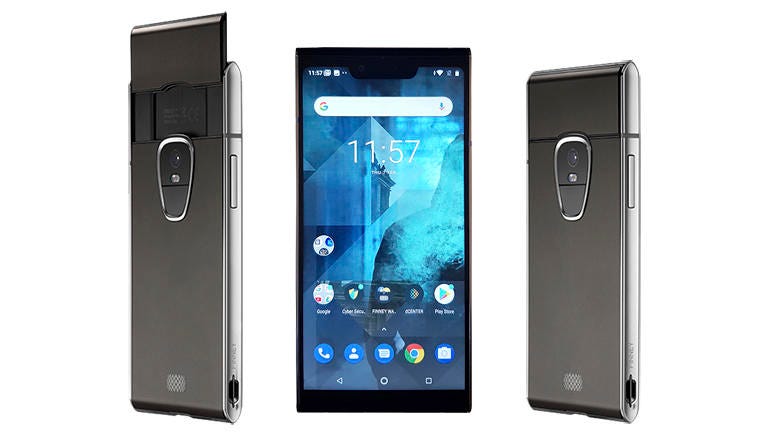 Sirin Labs' Finney, named after cryptocurrency pioneer Hal Finney, is the company's second smartphone, following 2016's secure-but-extremely-expensive Solarin. Finney differs from its predecessor in two main ways: it costs an order of magnitude less (£694/$899 versus over £10,000) and it incorporates a cold storage cryptocurrency wallet, activated and accessed via a secondary slide-out screen.

Funded by an ICO of Sirin Labs' SRN tokens that raised $157.9 million, the Foxconn-built Finney is a 2018-flagship-class smartphone running a security-hardened version of Android — Sirin OS — that supports the hardware crypto wallet.

There's a lot of interest in blockchain and cryptocurrencies like Bitcoin and Ethereum, but this remains largely restricted to technically-adept early adopters. A major impediment to mass adoption of blockchain applications, said founder and co-CEO Moshe Hogeg at the relaunch of Sirin Labs' flagship London store in January, has been usability. "The user experience, until today, has been very bad. You need private keys and very long addresses, and if you forget them then you essentially lose your money...people cannot use it [cryptocurrency] in a comfortable way, and would prefer to use dollars or other currencies," he said.

The aim with the Finney phone was to balance safety and simplicity: "I can't say we completely figured it out," Hogeg admitted, "but I think we took two or three steps forward from what we have today in the market, and that's crucial."

Heralded as the first blockchain phone (a claim also made by HTC for its Exodus 1), will the Finney handset prove to be a breakthrough product?

The Finney is a 6-inch handset with an 18:9, 1,080-by-2,160-pixel screen incorporating a notch at the top for the front camera and earpiece. The display sits in a chassis measuring 74.6mm by 158mm, with relatively large bezels at the top and bottom. The handset is 9.3mm thick and weighs 209g.

By comparison with Apple's 6.1-inch iPhone XR, the Finney has a higher screen pixel density (402ppi versus 326ppi), a lower screen-to body ratio (78.8% versus 80.1%), and is thicker (9.3mm versus 8.3mm) and heavier (209g versus 194g). It's less resistant to dust and water, with an ingress protection (IP) rating of IP52 ('dust protected'/resistant to dripping water) compared with the iPhone XR's IP67 ('dust tight'/resistant to immersion in 1m of water for at least 30 minutes).

Sirin Labs says the Finney's 'modern and exclusive' design is inspired by contemporary sports cars — presumably a reference to its concave metal sides that taper towards the top and bottom. The speaker grilles on the sides also have an autosport look about them (only the right-hand one actually has a speaker behind it). At the back, Sirin Labs' characteristic shield design houses the main camera, flash unit and fingerprint reader.

The left side has a volume rocker, while the right side has a power button and a SIM/MicroSD card tray. A USB-C port on the bottom edge provides for charging, PC connection and headphone attachment (a 3.5mm audio dongle is provided in the box).

Like many modern smartphones, the Finney's glass and metal body is slippery in the hand — although at least the matte-finish back on my Pebble Grey review unit wasn't too much of a fingerprint magnet. Cases are available in various colours, at £26.68.

Safe Screen
The Finney's standout design feature is its Safe Screen, a monochrome 2-inch PMOLED touch panel with 256-by-64 resolution that slides up from the back, just above the shield unit. Sliding out the Safe Screen activates the cryptocurrency wallet, which is securely disconnected from the internet when the screen is out of sight.

We'll examine the wallet's features later, but from a design standpoint it's worth mentioning that you may struggle to engage the Safe Screen if you keep your fingernails very short: some sort of notch or stippled area would help here. It's also fiddly to enter passwords and other information on the small 2-inch touch-screen.

The Finney runs Android 8.1/Sirin OS on a respectable 2018-flagship-class platform: Qualcomm's Snapdragon 845 chipset, with 6GB of RAM and 128GB of internal storage, the latter expandable via MicroSD.

The main rear camera is a 12MP unit with an f/1.8 lens, while the front selfie/video calling camera has 8MP resolution and an f/2.2 lens. There's a decent range of camera functionality for still images: OIS and EIS, auto HDR, a low-light mode, auto white balance, plus panorama, beauty, timer and burst modes. You can record 4K video at 60fps, or slow-motion FHD footage at 120fps, with EIS but not OIS available. The Finney captures respectable images — but if you're buying this handset, you're not really buying it for the camera.

Powering all this is a 3,280mAh battery rated for up to 20 hours of talk, 10 hours of video, 65 hours of music playback and 13 hours of internet use. Qualcomm QuickCharge 4.0 support should allow you to charge the Finney to 50 percent in 30 minutes or 100 percent in 120 minutes. There's no support for wireless charging though.

To set up the crypto wallet you create a password, whereupon the device generates a set of 24 randomly-selected 'seed words', which are the keys to your crypto assets. You need to write these down and store them in a safe (offline) location. The Finney then creates and syncs a wallet with accounts for Bitcoin (BTC), Ethereum (ETH) and Sirin Labs' SRN token (more currencies are promised for the future). If you already have a crypto wallet with BIP 39 and BIP 44-compatible seed words, you can enter those to access your wallet on the Finney handset. An extra level of security is available via an optional passphrase, which you enter along with your password to access the crypto wallet.

If you lose your Finney device, or it gets broken, you can regain access to the wallet's contents via your 24 seed words. And when the crypto wallet is 'hot' (i.e. connected to the internet), communications with Sirin OS are protected via a hardware firewall.

With the wallet up and running, you can send, receive and convert cryptocurrency with relative ease. The conversion function is a major selling point for Sirin Labs, as it means you don't have to go through an online exchange. Navigating the conversion is straightforward enough: you select the currency you have and the one you want to convert to (the wallet shows the minimum and maximum amounts, and exchange rates are regularly updated), determine the (small) transaction fee, enter your password and then verify an auto-generated address to authorise the transaction. Obviously this facility will gain value as Sirin Labs adds support for more cryptocurrencies.

Sending and receiving currency is also pretty easy, with QR codes as well as address strings available to identify transactions.

During testing, I successfully loaded Bitcoin and Ethereum onto the Finney from a Coinbase account, converted between these currencies and SRN tokens and vice versa, and also bought a Bjork MP3 using BTC. That's no power-user crypto portfolio, but it's a start — especially as cryptocurrencies aren't widely accepted in the UK yet.

The other main blockchain-related feature is the dCENTER, where a bunch of decentralised applications, or DApps, are curated. These can earn you cryptocurrency or tokens in exchange for watching videos: we looked at a couple during the test period, resulting in tokens worth 10,000 KUE and 1,745 SWE. Theoretically you could recover the cost of the Finney phone in this way, although this isn't practical at the moment due to the dearth of Learn & Earn apps.

As far as performance is concerned, there are no complaints about the Finney, which holds its own admirably against other leading Snapdragon 845-powered smartphones:

In use, the device was responsive when opening apps, scrolling through websites, playing videos and performing other mainstream tasks. However, I didn't do any heavy-duty gaming — or indeed any gaming at all.

The Geekbench 4 battery test gave the Finney's 3,280mAh battery a score of 3490, reducing the charge from 100 percent to 51 percent after three hours. That's a comparable score to the OnePlus 6 with its 3,000mAh battery, but well behind the Samsung Galaxy Note 9, which is powered by a 4,000mAh battery:

No-one, least of all Sirin Labs, is claiming that the Finney will occupy anything other than a niche in the smartphone firmament — although the company is forecasting sales in the hundreds of thousands. If you're not a cryptocurrency enthusiast, you can certainly get a better phone for $899. Not that there's anything wrong with the Finney, which is a well-built handset. But its real job is to demonstrate the value of Sirin OS as a secure and usable platform for cryptocurrencies and other blockchain apps: licensing its platform to other smartphone makers may be a better bet for Sirin Labs than the hardware business in the long run.

$145 million funds frozen after death of cryptocurrency exchange admin
Highly unlikely that the exchange and its users will ever get access to these funds ever again.

Why your business needs a continuity plan and how to create one (TechRepublic)
The death of a cryptocurrency exchange CEO serves as a cautionary tale of FinTech startups playing with huge sums of cash without the caution and oversight needed.

Sirin Finney phone pops up hidden second screen for cryptocurrency security (CNET)
The Sirin Finney is among the first blockchain phones. Here's how it works.