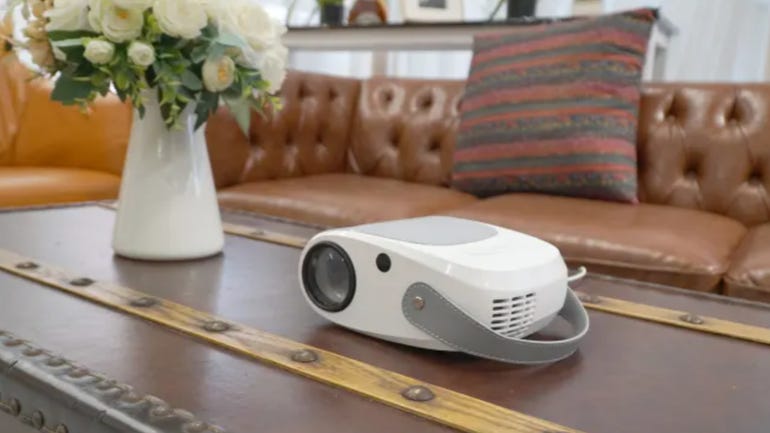 The Vankyo 520W projector is the smallest projector that I have looked at for a while. But despite its compact size, this projector has a lot of cool features.

This LED projector would suit any scenario in home entertainment or office environments. Its dimensions are 7.83 x 6.06 x 3.35 inches, and it weighs only 2.45 pounds.

The 520W has an LED light source and LCD display technology delivering a native resolution of 1280 x 720px with aspect ratios of either 16:9 or 4:3, and will it project a screen size from 39 inches up to 200 inches if positioned 20 feet from the projector.

The 2400 lumen gives a reasonable display in daylight, but darker rooms are more optimal. I found that only in bright sunlight did the image suffer, but drawing the blinds a little solved this issue.

In the box, there is the projector, a remote control (although batteries are not included in the box), an AC/DC power adaptor, a short AV cable, a 3ft long HDMI cable, and a power cable.

This projector does not have a carry case, but as it is so small, I do not think that it really needs a case. It is almost pocket-sized.

On the side of the projector are ports for AV in, HDMI in, a TF card slot, and a USB port. There is also a USB Type-C connector that connects to the power adaptor. Underneath there is a screw foot for image height adjustment. There is also a handy carrying handle for the unit.

Power on the projector, select the language and input source for the projector. Focus and vertical keystone corrections are adjusted using a manual knob, the remaining adjustments are available from the on-screen menu.

Input sources are HDMI, AV, SD, USB, and screen mirroring for Android and iOS. You can use screen mirroring either by using a USB cable or wirelessly. Connect to the device over Wi-Fi and the image shown on your phone or tablet will be projected onto the screen.

The projector will work with TV sticks, smartphones, tablets, TVs, laptops, USB sticks, TF cards (max 32GB), and DVD players. It will connect to your smartphone, PS3, PS4, Xbox One, or Wii.

The projector does feel a little 'plastic-y' to me -- but this is due to its lightweight and compact size. It certainly is not flimsy in its construction.

Another slight nag I had was that the keystone is only vertical correction, so I had to make sure that the camera was front and centre of where I wanted to project to. However, for its sub $130 price, I would not demand functionality that is usually available in more expensive projectors

This is a nice handy-sized projector that will project almost anywhere and with a decent-sized screen too. It has smashed its initial crowdfunding target on Indiegogo and is currently in the shipping phase.