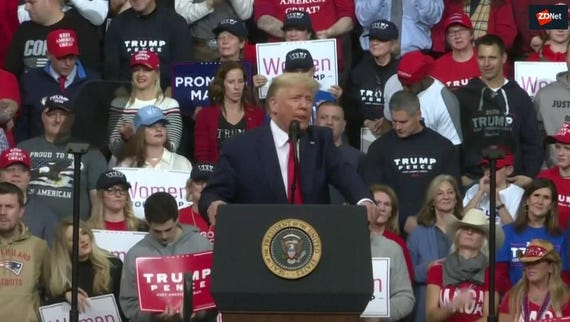 Has the 2020 election news cycle got you anxious, depressed, confused, or just plain exhausted? Have you started hating friends and mistrusting most of what you read?

Well, there are some apps I recommend. Really.

Under the best of circumstances, political discussions can get heated and even venomous. But this is no normal election year. Embroiled by scandals and a bitterly divided political landscape, this election cycle promises to be one of the most contentious in our nation's history.

On social media, supporters from every side are at each other's throats, pitting friends, coworkers and family members against each other. To make matters worse, the diversified media landscape -- combined with targeted campaigns on social media -- has enabled each side to live within its own echo chamber, feasting on information that conforms to their worldview while ignoring the rest. Add that to the proliferation of fake news and clickbait, and what we've ended up with is a misinformed and uneducated public whose opinions are based on little more than propaganda and false information.

There are no easy solutions to the problems we face.

But there is at least one step we can all take: Becoming more mindful of the sources of news, and how we interact with others on social networks.

As a basis for layering these tools, I recommend starting with a web browser that is designed to be secure as well as privacy-enhanced. That browser is the new Microsoft Edge, which runs on all the primary desktop computing and mobile operating system platforms (a version for Linux desktops is also forthcoming).

Unlike Chrome, which Microsoft's new browser is based on, Edge has some additional features for tracking prevention, which work with both tracking cookies and scripts, and uses a centralized database for recognizing sites known to abuse them.

Microsoft has included three tracking prevention profiles with Edge: Basic, Balanced (default), and Strict. Depending on which of these profiles you pick, it will affect how personalized your content on any particular website will be when you visit it -- that includes political-oriented content, potentially generated by campaigns or organizations affiliated with them.

Also: The new Microsoft Edge: 10 rules to take control of your browser

Blocking trackers also prevent sites (that may be politically affiliated or motivated) from using your personalized metadata to gain insight into their metrics. While this may not benefit you personally, if more people start blocking organizations that use these types of tracking mechanisms, then the value of their data as to how it can be politically weaponized potentially becomes far less useful to the organizations, as well.

A key aspect of being able to separate politically-charged and heavily biased content from legitimate news reporting is gaining key insights about the source of information. Often, we look at news articles that are shared on social networks and are unaware of their origin, age, intended audience, biases, credibility, transparency, or lack thereof.

In this example, The Washington Post is shown as a Verified account on Facebook (blue checkmark), indicating it is a recognized media outlet. There is also a summary of its content, which is retrieved from Wikipedia.

If there is extended information about the content supplier -- such as fact-checking, correction, ethics, editorial team composition, and who owns the publication and how it is funded -- links will also be presented. In the example of The Washington Post and various other major news outlets, The Trust Project is used by Facebook as an independent source to verify transparency standards for assessing the quality and credibility of a news article.

However, only a limited number of media outlets on Facebook have extended transparency information validated by The Trust Project. For example, this is the entry for Breitbart in About This Content:

Similarly, The New York Times does not have extended information shown either.


Facebook's built-in capabilities for recognizing fake and inaccurate content are limited. Additionally, outside of the social networks, when viewing a website directly, there hasn't been an easy way to see if a particular news source is credible, or transparent. Fortunately, we now have NewsGuard, which works in Chrome and the new Microsoft Edge.

NewsGuard is a desktop Chrome extension that is available by subscription. It launched in February of 2020 and costs $2.95 per month as a desktop user and is free to use if you are a Microsoft Edge user on iOS or Android. The New York City-based company is run by trained journalists who come from a diverse set of backgrounds and (according to the company) are committed to presenting unbiased news reporting.

To use the service for free in the Microsoft Edge mobile browser, open up Settings, choose News Rating and then enable the "Display rating on the address bar"

Once enabled in the mobile version of Edge, you will be able to see the ratings for the website that you are currently viewing:

Thousands of sites that are rated in NewsGuard's database are evaluated on a multi-point system for both credibility and transparency. Websites that are considered to be reliable sources of information are labeled as green checks. These clickable green checkmarks appear in the browser near the URL field and are also displayed in-line with web content, such as within Facebook, and even on Google News and other major news aggregators.

On a desktop browser, the extended information about a NewsGuard "all-green" content source, such as The Washington Post, displays as follows:

While many sites may pass a complete health check, it is also possible for a website to check out as "green'' overall but may have specific issues that the NewsGuard team find of concern. For example, Fox News, which checks out as a green, scores 69.5 out of 100 on NewsGuard's scale. It has specific issues noted for credibility but fully checks out on transparency.

Even lower-scoring than Fox News, Occupy Democrats scores a 65 out of 100 and loses points for its lack of error corrections and clarifications, regularly blending news and opinion in its reporting and using deceptive headlines.

In addition to green checks, NewsGuard will also indicate if a site is "red" (failing to meet credibility and transparency standards), is a satire site (such as The Onion or NewsThump), or is a content platform that hosts user-generated material (such as YouTube, or Medium).

An example of how a red site is displayed:

In this example, this conservative-leaning site is noted as not gathering information responsibly, not regularly correcting errors or issuing clarifications, not distinguishing between news and opinion responsibly, not avoiding the use of deceptive headlines, and not properly disclosing ownership and financing.

It's not just conservative sites that score poorly. This liberal-leaning site, for example, fails miserably on both credibility and transparency.

Another example of a "Red" liberal site is Courier Newsroom, which was founded at the end of 2019, masquerades as a news site but primarily only focuses on positive news coverage of congressional Democrats in highly contested districts.

In addition to NewsGuard, an objective survey of media bias and credibility can be found at Ad Fontes Media, which produces an interactive chart that places well-known media outlets on a two-dimensional axis based on how they align on political bias and accuracy. It's good for reference and is produced on a yearly basis.

Tools such as NewsGuard may help us navigate the web and social networks with more confidence about the content that we are being exposed to daily. Still, sometimes it may be necessary to disconnect from the political news stream entirely due to its emotionally taxing nature. Political content on Facebook, especially, can be a source of stress and a trigger for anxiety and depression for many people -- as well as interpersonal conflicts.

One such way of limiting the amount of political content on Facebook is SocialFixer, which is a free extension that runs on the desktop versions of Chrome and Microsoft Edge.

SocialFixer modifies the visual layout of Facebook so that it displays information in a highly customized fashion depending on the preferences of the user, such as being able to change the default feed view of the social network to most recent, as opposed to top stories.

SocialFixer has a long list of features that allow the user to alter many aspects of their Facebook experience. But what is the most valuable and relevant to the election cycle, in particular, is its ability to filter out politically-oriented posts completely.

SocialFixer's Filter options screen allows you to choose "ElectionPolitics 2020" as a subscription. The extension creator hosts a maintained list of keywords, which, when mentioned in a Facebook post, will result in the post being muted from view.

The keywords for the ElectionPolitics 2020 subscription can be viewed on this screen when Edit Filter is selected from the filter list.

The keywords as of this writing are defined in a regular expression, or regex, which is stored, maintained and updated on SocialFixer's servers. They are as follows:

When any of these words are in a Facebook post that one of your friends shares, they will be concealed from view, as in the following example:

Have you begun using any of these tools as the election cycle ramps up? Talk Back and Let Me Know.