SFR has begun trialling LTE-Advanced, the higher-speed successor to LTE. 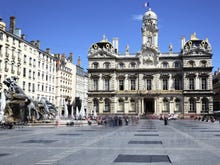 The company, France's second biggest mobile operator, announced on Friday it had starting piloting the technology in Marseille.

During the tests, SFR reported download speeds in the region of 175Mpbs and uploads of around 35Mbps.

The trial involved the aggregation of both 800Mhz and 2600Mhz spectrum bands.

The first LTE-Advanced hardware is expected to hit the market at the end of 2014 in France, SFR said.

The operator expects the enterprise to be an early focus for LTE-Advanced, with initial hardware launches likely to focus on routers in order to share 4G connectivity between a number of users.

It's the first time LTE-Advanced has been trialled in France, according to the operator.

It's also thought to be one of the only such pilots in Europe — to date, most LTE-Advanced experiments, and the first network rollout , have taken place in Asia.

SFR said it spends €1.5bn on its fixed and mobile infrastructure each year.

Join Discussion for: 4G gets supercharged as France tests out...