It's hard to hear above the Apple noise.

Especially when Apple launches not one phone, but three.

Still, Google just released Pixel 3, a phone that has attracted much praise, as well as a few snorts that it fails to store all your pictures.

I wanted to see how Verizon -- the exclusive purveyor of the Pixel 3 -- was presenting this new phone.

So I wandered along to a Bay Area store to find out.

No sooner had I stepped through the doors than there it was. Or, rather, they were. The Pixel 3 and the 3 XL.

I explained that I'd seen an ad for the Pixel 3, the one that showed how the phone would automatically fix your terrible photos.

"You can pose for a group shot and it won't take the picture unless everyone is smiling," he said, a touch too beatifically.

"Wait, isn't that a little creepy?" I asked. "Not everyone wants to smile in pictures."

"You can override it," he replied.

I asked him what was so good about the phone. He said that people were buying them and that it was a very well-made phone "that's just as good as the iPhones or the Samsungs."

"But what about security?" I wondered.

Google is just as good at security? Tim Cook thinks the likes of Google and Facebook are security Beelzebubs with no clothes.

"Well, I'd have to see what he said about Google and Facebook, but the Pixel is just as well protected from hackers as the iPhone," he said.

"What phone do you have?" I asked.

He pulled out his Note and we compared the size to the Pixel 3 XL. They were fairly comparable. He explained that the Pixel had less bloatware than the Note.

And then came his confession. Or perhaps it was just a masterful sales tactic.

"I'm thinking of getting a Pixel," he said.

It was then that he offered his main reason for wanting one: "It's just different. I've been stuck in the Apple ecosystem for so long and I just want a change."

"So the best reason you can give me for switching is that this phone is different?"

"Yeah. And I like the colors. I'd get either the white one or the black one. The Not Pink [Yes, Google really calls it that] isn't for me."

I can't imagine it being for anyone. The color resembles a particularly pale Icelander's complexion after two swift White Zinfandels.

Why, I asked, hadn't he bought one already? 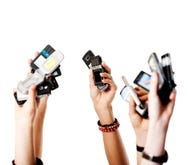 "Because I'd have to buy all the paid apps I have on my iPhone all over again," he said.

Yes, the one irritating factor for many of switching from Apple to Google.

I explained it's hard to decide about phones when one knows Apple is about to release yet another phone, the XR. He agreed, while reminding me that if I bought either a Pixel or an iPhone XR, I could have a second one for free. (He was no ordinary Solutions guy. He was a Specialist.)

"But you can't mix and match," he helpfully added.

The day I visited the Verizon store, Google released a new ad. It was called The Power to Wonder.

I walked out of the Verizon store wondering about the fact that the Pixel 3 is a very nice phone, but that the strongest reason to buy it is that it's not an iPhone or a Samsung Galaxy.

Yes, the salesman had tried to get me away from my iPhone by suggesting I think different.

Join Discussion for: A Verizon salesman gave me a brilliant reason...