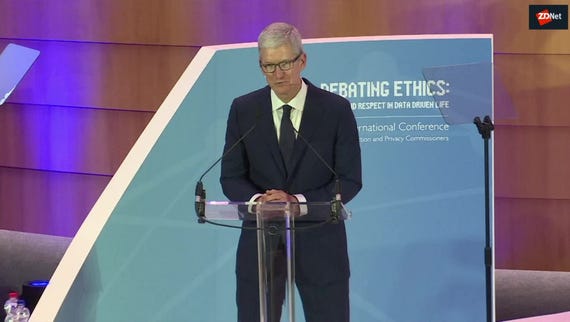 The world's data and privacy "crisis" is real, Tim Cook told Europe's privacy watchdogs today, warning that our likes, fears, and hopes have become the fodder for trade by companies collecting personal data with "military efficiency".

That trade in personal information "has exploded into a data industrial complex", he argued in an impassioned speech congratulating Europe for introducing the GDPR privacy regulations.

"Our own information, from the everyday to the deeply personal, is being weaponized against us with military efficiency," he said.

Cook's keynote in Brussels at the 40th International Conference of Data Protection and Privacy Commissioners didn't mention Facebook and Google, two companies he's criticized before over privacy and data collection.

However, he warned that the mass collection of private data amounts to surveillance in action.

"Every day billions of dollars change hands and countless decisions are made on the basis of our likes and dislikes, our friends and families, our relationships and conversations, our wishes and fears, our hopes and dreams," he said.

"These scraps of data, each one harmless enough on its own, are carefully assembled, synthesized, traded and sold. Taken to its extreme, this process creates an enduring digital profile and lets companies know you better than you know yourself."

He also called out the advancement of AI through the mass collection of personal profiles "laziness, not efficiency".

He argued we shouldn't "sugarcoat the consequences" of this data collection. "This is surveillance," said Cook.

"These stockpiles of personal data serve only to enrich the companies that collect them," he added.

Cook endorsed Europe's GDPR privacy laws, which came into effect in May, and called on the US to follow suit with matching regulations at a federal level.

"Anything less is a sham," he said.

"It is time for the rest of the world, including my home country, to follow your lead. We at Apple are in full support of competence federal privacy law in the United States."

The iPhone doesn't spy on users, Apple tells US lawmakers

Apple again tells congress that iPhone customers are "not our product".

In the future, not even your DNA will be sacred CNET

Commentary: Even if you haven't shared your DNA with a genealogy website, chances are you're identifiable now. (Spoiler: Your third cousin sold you out).