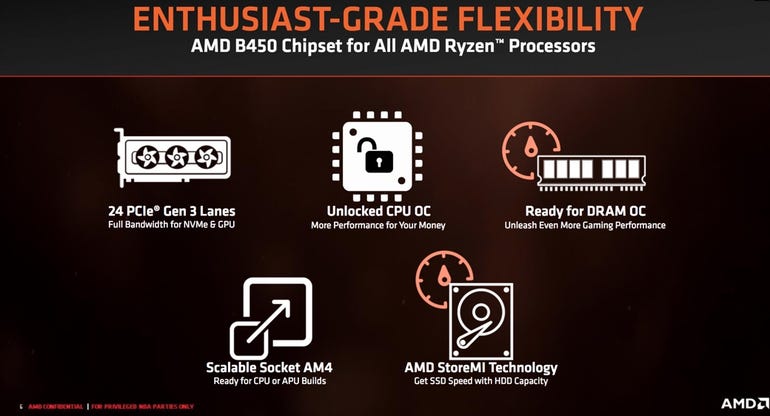 AMD's Socket AM4 was launched back in September of 2016, but it continues to be not only current but cutting-edge, and the latest B450 chipset-based motherboards brings some new features to mid-range users.

It's not just that there's still life in the Socket AM4 platform, but the platform is still cutting-edge, incorporating support for the latest technologies such as PCIe 3.0, DDR4, and USB 3.1 Gen 2.

AMD has learned some lessons since the initial launch of the Socket AM4 platform, one of those being that mid-range users would like access to high-end features, which is why the B450 has features - such and memory overclockability and optimizations - found on the X470 platform and incorporated them into the new chipset.

As part of this AMD also brings the StoreMI storage acceleration technology previously found on the high-end X470 platform to the B450 chipset.

So what are users giving up by going with the B450 as opposed to the B370 or X470 chipset? The only thing users are giving up is CPU PCIe bifurcations, a technology that allows users to get full bandwidth when using two graphics cards. As users move more towards single graphics cards - especially in the mainstream market - this is not really much of an issue.

Despite being aimed at the mid-range mainstream market, the B450 offers enthusiast-class performance and features, and come totally unlocked.

AMD's Socket AM4 platform isn't going anywhere soon ether, with AMD planning support all the way out to 2020, making new features and upgrades available to existing users via motherboard BIOS upgrade rather than having to buy and install a new motherboard.

Socket AM4 motherboards with B450 chipsets will be offered by all the usually motherboard vendors.