Full Bio
Posted in Between the Lines on August 7, 2019 | Topic: Processors 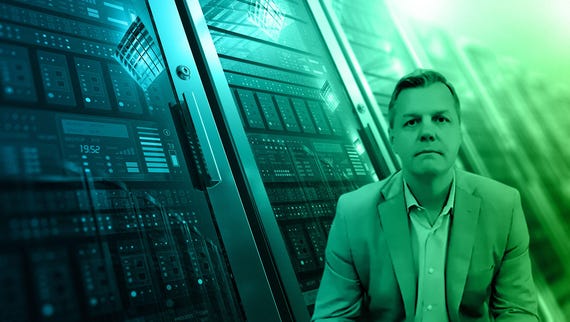 Two years ago, AMD jumped back into the stagnant waters of the data center market and made a huge splash. Its Epyc line of processors transformed the server landscape, bringing Intel some much-needed competition.

On Wednesday, AMD is taking the next step in its data center strategy with the official launch of the 2nd Gen Epyc 7002 Series processors, also known as Epyc Rome chips. It's the world's first 7-nanometer server processor -- a huge milestone for AMD and a black eye for Intel, which has struggled to get its 10 nm chips out of the gate.

The launch represents an inflection point for the AMD and the industry, said Scott Aylor, general manager of AMD's Datacenter Solutions Group.

"We're moving into the lead," he said to ZDNet.

To be sure, AMD is nowhere near gaining market share leadership. While AMD's 1st Gen Epyc chips allowed it to break through into the mid-single digits, Intel still overwhelmingly dominates the market. Still, Aylor said, the launch of the 2nd Gen Epyc chips gives AMD the lead in terms of performance, architecture, and security.

"Epyc second-generation is really setting a new standard for the data center," he said.

Adding weight to its claims, AMD rolled out the new processor in conjunction with major customers. For instance, Google announced it had deployed the 2nd Gen Epyc chips in its internal infrastructure production data center environment. In late 2019, Google will support new general-purpose machines powered by the processors on Google Cloud Compute Engine.

AMD's strategy starts with performance. As previously reported, the 2nd Gen Epyc processor features eight to 64 Zen 2 cores, combining up to eight 7-nanometer chiplets with a 14-nanometer I/O die. The Rome chip offers twice the performance per socket and about 4X peak theoretical FLOPS compared to the previous generation of Epyc chips.

Across "high volume, high growth-relevant workloads," the processor has an 80 percent to 100 percent performance advantage over the competition, Aylor said.

It's an impressive feat, he said, given that generational improvements in this industry are typically in the range of 10 percent to 20 percent.

"So when we take and bend the curve on performance, generation on generation, in terms of doubling performance, and having that level of lead over and above our competitor, you can imagine why customers and partners are super excited," he added.

AMD is bringing the chip to market with solid momentum from the first generation of Epyc processors. After just 18 months on the market, there are currently more than 60 AMD Epyc server platforms and more than 50 Epyc cloud offerings from major cloud service providers like Amazon Web Services, Microsoft Azure, Baidu, Tencent Cloud and more.

With initial Rome Epyc shipments already out to cloud and OEM customers, the 2nd Gen chip is on track to ramp significantly faster than the first generation, AMD has said.

Dell Technologies on Wednesday said it would offer a complete portfolio of Dell EMC PowerEdge servers with the Epyc Rome processors, with the new systems rolling out soon this year.

Meanwhile, HPE -- a solid AMD partner -- is planning in the next 18 months to triple the number of Epyc-equipped products in its portfolio. On top of that, HPE announced Wednesday that it'd set more than three dozen new record benchmark results with two new data center servers equipped with the 2nd Gen Epyc processor.

When it comes to virtualization performance, the new HPE ProLiant DL325 server eclipsed previous records by 321 percent, while the HPE ProLiant DL385 server beat the previous record with 61 percent better performance at a 29 percent better price-performance ratio. This kind of performance, HPE said, can enable more workloads to run on fewer servers, reducing hardware acquisition and operational costs, as well as software costs where applications are licensed on a per-processor basis.

The Minnesota Supercomputing Institute at the University of Minnesota has already deployed the HPE ProLiant DL385 with the Rome chip. "We are gaining significant performance required to power our enormously diverse set of computational workloads while achieving efficiency and cost savings compared to our previous system," Dr. James Wilgenbusch, director of Research Computing at the Institute, said in a statement.

AMD will need to lean on OEMs like HPE, Dell, and Lenovo to build up its enterprise business, analyst Patrick Moorhead, founder of Moor Insights & Strategy, said to ZDNet. Over the past two years, AMD has invested more in the enterprise value chain -- comprising ISV, field sales, resellers, ads, and SIs -- but nowhere to the degree that Intel has been investing in the last decade, Moorhead added.

By comparison, the cloud and high-performance computing markets could be easier to crack with the same sales, marketing and ISV plays used for the 1st Gen Epyc chip.

What it takes to compete against Intel

"We're not only here, but we're here to stay," Aylor said.

AMD's presence in the market is inherently beneficial to customers if only to keep Intel honest.

"Every ODM, OEM, CSP, and enterprise I have talked to wants more competition in the space to accelerate innovation and lower costs," Moorhead said. "With that said, none of these customers would adopt AMD if it didn't have some advantages."
Intel, for its part, plans to move its 10-nanometer Ice Lake processors into production in the first half of 2020 -- a full year after AMD's Rome chip -- with a volume ramp in the second half of the year.

Intel has also focused on expanding its portfolio beyond CPUs, offering different kinds of processors for different types of workloads, such as Nervana Neural Network Processors. Its expanded portfolio also includes innovations in memory and storage.

In addition to a wider range of products, Intel is trying to deepen its customer relationships and play a larger role in their respective growth trajectories. For instance, the company recently announced an important strategic partnership with SAP to optimize Intel's platforms for SAP's enterprise software applications.

"AMD is focused on optimizing less workloads in number than Intel and does not provide as many elements of the solution to ODM and OEMs," Moorhead said. "For instance, to a carrier, Intel can offer a CPU, motherboard, NAND, Optane DC, networking cards, silicon photonics, FPGA acceleration cards, security accelerators, and an optimized software stack."

"When people are seeing us now executing on our roadmap without moving it -- without delays, without challenges from a technology perspective, while our competitors have faced some of those -- they start to feel the confidence that they're now moving with a leader," Aylor said.

In other words, he said, "We did what we said we would do, right?"

"When you look at all of the right OS and hypervisor vendors, all of the OEMs and now the cloud providers starting to adapt the technology that means their computing can be made more secure," Aylor said, "it's evidence of how we have to invest together on technology that enables them to solve real problems."

Meanwhile, for added validation, AMD is pointing to the federal government's decision to invest in AMD technology to build the Frontier exascale supercomputer. The $600 million exascale system -- built on AMD's Epyc CPUs and Radeon Instinct GPU processors, as well as Cray's Shasta architecture and Slingshot network -- is set to become the world's fastest supercomputer when it arrives at the lab in 2021.

While AMD has broken through with the Epyc chips, processor design and manufacturing is a tough business -- especially given the challenges that Moore's Law has been facing. Aylor framed that challenge as an opportunity for further innovation.

"When you look at an Epyc first generation, we brought together... the first mainstream multi-die approach to high-performance server processors. We now take and evolve that to a hybrid multi-die approach in the second-generation," he said. "When you look at the advancements from a core technology perspective, the move to seven-nanometer, the move to work integrated memory, these are all things that we need to keep in our toolbox that allow us to keep advancing the progress that the industry needs."

As it goes up against Intel's scale and resources, AMD can also spin its status as a fabless manufacturer as an advantage.

"It means that we can really partner with the best of the best," Aylor said. "We're not tied to our own internal foundry technology, so we can choose the right technology for the right product at the right time."

Meanwhile, Epyc's development will have to remain sustainable. The new 2nd Gen processors are compatible with existing Epyc 7001 Series platforms.