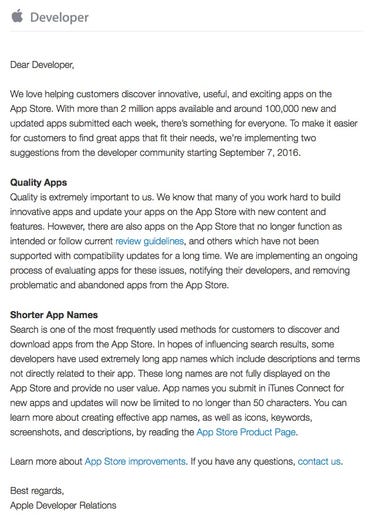 Apple on Thursday sent an email to developers, revealing the company's plans to rid the App Store of rotten apps.

Starting Sept. 7 -- the same day Apple is expected to announce the iPhone 7 and a new Apple Watch -- the company will begin evaluating apps currently listed in the App Store, looking for apps that no longer function or meet the current review guidelines.

More details on Apple's developer site reveal that if during the review process an app crashes when it's opened, it will be immediately removed from the App Store until the developer submits a fix.

App Store customers will still have access to any removed app(s) already installed on their devices.

Apple will also begin enforcing a 50-character limit for app names. Doing so will prevent developers from overloading an app's name with search friendly terms in an effort to rise to the top of App Store searches.

With two million apps in the App Store, developers often look for any advantage possible resulting in high search rankings. In its email to developers, Apple points out longer names aren't even viewable in the App Store and "provide no user value". Amen.

Bringing in Schiller was a move many developers viewed as a sign Apple was getting serious about fixing the App Store, with the loudest complaints surrounding discoverability.

In June, Apple revealed developers could purchase App Store search ads as a first step in boosting discoverability. It seems step two is to cut the fat, so to speak, from the App Store and remove apps abandoned long ago (there's a lot).

Apple also announced a new subscription model, where nearly any app can now charge a regular reoccurring fee to its users, with Apple's revenue share dropping from 30 percent to 15 percent after the first year.