2020 closed some of Apple's longest story arcs, and started new ones.
Written by Ross Rubin, Contributor on Jan. 5, 2021 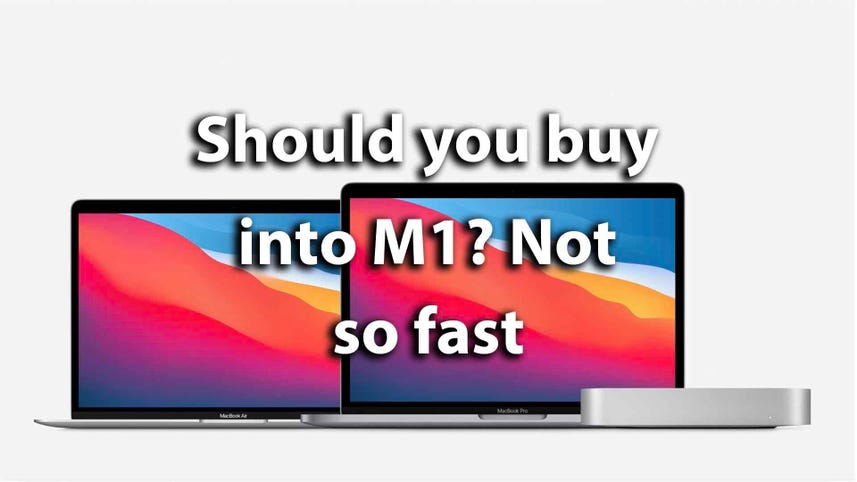 Sometimes, Apple plays the ground game; other times, it plays the long game. In 2020, some of Apple's longest running technology story arcs came to a close. But new ones started that have little to do with engineering beyond finding a way through an evolving competitive and regulatory environment

The launch of the M1 Macs

The most underrated performance increase that the M1 chips brought to the Mac was the increased velocity of people talking about a 40 year-old computer line. According to Google Trends, the term "MacBook" in late 2020 reached the highest level of search traffic since 2016. That's impressive given that the Mac fell to just 10.4% of Apple's revenue in 2020. And beyond its current lineup, Apple's attention is obviously also focused on future device product lines to drive revenue.

With that, Apple's investment in the M1 shows that Tim Cook's repeated assurance that "We love the Mac." is no platitude. Indeed, it would have been easy, as an exiled Steve Jobs once suggested, to "milk the Macintosh for all its worth and get started on the next great thing." Once Jobs returned, he indeed got started on the next great thing, and the next, and the next. But despite all this, 2020 showed definitively that, hell yes, the Mac still matters.

Speaking of Jobs, as Apple's new marketing chief Craig Joswiak said to veteran industry watcher and investor Om Malik following the launch, the M1 fulfills the Apple co-founder's desire and insistence on "making the whole widget" or at least as much of it as it can. (It partners with Corning on a special glass formulation just for its products and is working furiously to create its own 5G modems.) It represented the final chapter of the Mac's chip odyssey from Motorola to Intel.

The death of Flash

This new iPhone thing that Apple has launched. Have you seen it? Oh man. No keyboard. No copy and paste. And no support for Adobe Flash. The outcry in response to the iPhone not supporting Flash became so pitched that Steve Jobs published an open letter in 2010 sharing the company's thoughts on why it did not do so. Ten years later, Flash is dead.

Even without Apple's war on the multimedia plug-in, web standards may have well evolved to make Flash undesirable and obsolete, but probably not as quickly. As Jobs said in his open letter, Flash was not an open standard unlike HTML5 and others supported in the browser. On the other hand, Jobs also noted that you could not hover over objects in a multitouch interface and, while that is still true for the iPhone, the iPad now supports such gestures (albeit not without an accessory).

If Flash goes down as a footnote in web history, a footnote to that footnote would be Silverlight, Microsoft's would-be Flash killer. As early as 2008 (when Apple launched the app store on iOS before it was even called iOS), Steve Ballmer floated the idea of its multimedia enabler on the iPhone but expressed concern about Apple's 30% revenue cut. Twelve years and billions of dollars in app store sales later, Microsoft is still unhappy with Apple's app store rules, particularly as they apply to cloud gaming.

Apple has made some concessions on its 30% cut for smaller developers and advised cloud gaming players such as Google, Microsoft, Amazon and Nvidia to go through Safari, which seems to be a sound approach from the technical side. But that's done little to satisfy the growing number of developers that joined the Coalition for App Fairness in 2020. The resistance group spearheaded by Epic Games recently attracted a number of prominent media companies, and would receive a massive boost if outspoken app store dissidents Microsoft and Facebook (which has attracted its own app store criticism) join its ranks this year. On the other hand, Apple has a way of getting its way in the long run.

Does the Mac still matter?
In exclusive interviews, Apple executives explain why it was over four years in the making — and why we should care.

Epic, Spotify and other Apple critics form coalition to take on App Store rules
The nonprofit Coalition for App Fairness aims to level the playing field for app and game developers.

Flash on Firefox will die completely in 55 days
Firefox 83 is the penultimate version of Mozilla's browser to support the once ubiquitous plug-in. Security and battery life concerns hastened its demise.