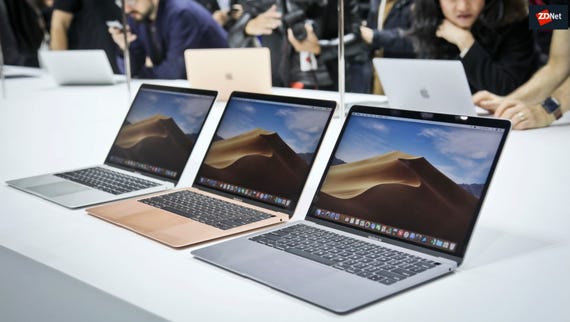 At least it's supposed to be, otherwise why would they release it?

Yes, but then New Coke wasn't as good as good 'ole Coke. And the new MacBook Air is, well, I'm still trying to decide.

Having resisted the urgings of an Apple store salesman to buy a MacBook Pro, I brought the Air home with a sense of achievement and loyalty.

I've used Airs for years. They've represented a certain grace in computers, a simplicity and effectiveness that few could approach.

But as I began to unbox my new Air, I feared that times have changed and I wouldn't be breathing quite the same Air again.

Also: Apple says iPad Pro can replace your computer: But you don't all agree

For a start, I've been used to the 11-inch version for a long time. It might be too small for some, but for me it was the perfect size to perch on my thigh and write, while I'm watching the Golden State Warriors.

There were no extraneous areas, no superfluous keys or, perish the idea, a Touch Bar to confuse not only your mental processes, but your physical habits.

Now here was a new Air and I wanted to believe it was a worthy successor.

The Shock Of the New.

Pulling it out of the box and loading it up was as simple as an Air should be.

Still, two cosmetic issues immediately strike the heart. One, the lack of a MagSafe connector. This is more painful than a wedgie delivered by a wildebeest.

Worse, the ordinary USB-C cable doesn't even enjoy a little light to tell you whether the machine charged or whether it's been out on the town a little too long.

It's as if the new MacBook Air decided that the old one was a little racy and needed to a few weeks in a convent to calm its spirit.

To go with that Spartan spirit, there's no light on the outside cover to illuminate the logo. It does make you feel as if this new Air has been to a yoga retreat, decided to sell all its possessions and move into a yurt.

Then there's the size.

When you've been used to an 11-inch screen for so long, the necessary leap to 13 inches is jarring.

Sometimes, I find myself leaving two inches of space around the edges and keeping my browser window at the old 11-inch mark.

It's creepy how habit can storm your life and dictate its every move.

I hadn't stopped to think -- I rarely do -- that getting a 13-inch laptop might involve taking on more weight. Even though it's a tiny step up from 2.4 lbs to 2.75 lbs, I'm convinced I can feel it.

I'm convinced, too, that my new Air is somehow bulkier than my old one, even though it's actually thinner.

Still, the one thing I do more than any other on a laptop is type. This is where the new Air leaves me hanging.

It isn't so much the butterfly keyboard and how it feels to the touch. My typing seems to be doing just fine. No obvious increase in typos. No painful misspelling of Peter Thiel or Utterly Bonkers.

It's as if my articles are now being written by a constipated duck. And the more you type, the faster you type, the noisier the duck appears to be.

It's curious how I've never noticed the sounds of my old Air -- save the early versions with their whining fan.

As I'm typing now on my new Air, I'm entirely conscious of the noise the keyboard is making.

I asked my wife whether she finds it more noisy. She said that the difference to her was that my new Air has "a deeper cadence."

Otherwise, I don't notice the bigger trackpad or the fact that my hands have a little more space to rest next the keyboard than they used to.

Yes, I notice it's faster, but so are all new gadgets. Until they slow down after a few months.

There is, though, one thing that has swayed me away from the duck noise and heavily toward this new version: the battery life. I now actually have some.

My old Air -- all of my old Airs -- had the attention span of a politician on cocaine.

One minute I'd be typing, the next there'd be a red alert.

I've worked on the new one for four hours without so much as worrying about whether it would begin to commit Hara-Kiri.

The space gray is a nice change, too, but I'm still concerned that this new completely redesigned Air has lost its Airness.

I still hanker after the Classic.

Also: Add 14 ports to your Mac or PC with the OWC Thunderbolt 3 dock

Unlike that Classic, this new Air feels more like a laptop I've seen elsewhere. It's good, but is it original enough? (Or am I wallowing a little too much in a blancmange of nostalgia?)

Just like phones, I fear that laptops have sunk to a more common design aesthetic, one that time and a slowdown in technological development has forced upon them.

It's a little deflating.

After a nearly four-year drought, in the last 12 months, Apple has finally produced products that allow extreme pros to get their work done. In this article, we discuss why that's important for all users, not just those living on the bleeding edge.

Apple wants you to think different for the holidays

Why would an Apple store salesman try to persuade me not to buy Apple's latest laptop?

This long-overdue update refines the MacBook Air's elegant, lightweight design, while adding up-to-date features such as a Retina Display and the T2 security chip.

Join Discussion for: I've spent a week with the new MacBook Air...