Next time you go to move house or buy a new home, as well as thinking about its price, its location, and its transport links, you may well find yourself asking about its operating system too.

At this year's WWDC event, Apple announced that five homebuilders -- including Brookfield Residential, KP, and Lennar -- had agreed to support HomeKit in new properties. "Some of the biggest builders of homes, here in the United States and in China, are now building new homes with HomeKit built right in, so you can move and just start controlling your home," Craig Federighi, Apple's senior vice president of software engineering, said at the event.

The market for smart home technology may be relatively modest today, but researchers are predicting a growth rate of around 15 percent over the coming years: analysts Markets and Markets expect the smart home tech market to be worth $121.7bn by 2022.

Apple launched its own smart things framework, HomeKit, in 2015, aiming to put iOS at the heart of home automation. At launch, the framework was only used by a handful of hardware manufacturers, but now over 70 of them have a product on the shelves or on the way. Apple has also created a single app, Home, for controlling all iOS connected objects around the house.

Smart Home Guide From connected light bulbs, to plant sensors, to smart locks, and beyond, smart home tech is growing and evolving rapidly. Here you'll find the latest product reviews, news, and how-tos to help you connect your surroundings to the internet in the smartest way possible.

However, take-up has remained modest: it's estimated around five percent of homes in the US have smart technology installed, using not only Apple's HomeKit platform, but offerings from rivals including Google's Nest and Samsung's SmartThings. By enlisting homebuilders to its cause, Apple is looking for a new way of growing its market.

While smart homes may be niche today, the five homebuilders that have announced they'll be installing Apple kit are hoping they're just predicting how homebuyers' needs will change over the coming years.

"We know that people walk into a new home and expect new things. People expect new technologies, at the same time they're super-confused about how home automation and the connected world works, so we take those [two factors] and turn them into opportunity by showing them a simple unified, interoperable solution," David Kaiserman, president of Lennar Ventures, said.

Given the relative size of the home-building market compared to real estate resale, what's in it for Apple? For one, there are no customer acquisition costs, and putting HomeKit appliances directly into new homes overcomes the two elements that can put people off smart home tech: cost, as the price of the kit is built into the price of the home, and complexity, as the HomeKit devices are ready to go when they move in.

Both homebuilders initially heard about Apple's interest in having new HomeKit properties through their existing suppliers, such as lock-maker Schlag. The builders say they were interested in the collaboration with Apple due to its history of making reliable kit and offering a single control platform, Home, for each individual bit of equipment. 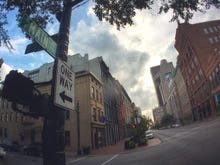 Louisville's new high tech command center TechRepublic is partnering with CNET and City of Louisville to connect smart cities to professionals and their living spaces.

With Apple this year extending the range of accessories that can use HomeKit to add devices including doorbells, cameras, air conditioners, and home security cameras, combined with falling prices, consumers will soon see the attraction of smart home tech, homebuilders believe.

"We think the consumer, once exposed to these technologies, will never go back. It's been available for a while in crude forms or expensive forms. Our anticipation is that [home automation technology] is becoming so attainable, it will be 'why not? Why aren't I putting it in my home?'," said Brookfield Residential COO Adrian Foley.

Brookfield is expecting to put in HomeKit technology including locks and thermostats, while Lennar is looking at lights, locks, thermostats, cameras, and potentially audio equipment too.

Both companies have considered the potential security implications of houses where infrastructure is online and can be controlled remotely, but Foley likens it to an evolution of existing security threats to homes. "There are obviously some risk: there is privacy and hacking, and we have to think about that, but today, if someone wanted to get in your house and figure out how to pick your locks, they could do that," Foley said.

So how long will you have to wait until you can buy your HomeKit enabled house? Not very long at all, it turns out: while Lennar declined to give a timescale, Brookfield Residential is already in the process of drawing up a new technology specification for its home that will feature HomeKit, putting together a roadmap for Apple-based properties, and selecting which communities the technology will go into.

Rather sensibly, both are also thinking about the technological plumbing that will be needed to actually make the smart home deliver on its promises. In Brookfield Residential's case, the company is looking at showcasing the first HomeKit-enabled home in Summerset in Ontario Ranch, California -- an area where there are gigabit broadband speeds. In Lennar's case, the company is prioritizing building homes where every inch is covered by a solid wi-fi signal. "Having a environment in your home that has no dead spots is an essential and foundation component" of delivering a good smart home experience, Lennar Venture's Kaiserman said.

How will homebuilders deal with the pace of technology change? After all, a smartphone owner might replace their device every couple of years, but stay in the same home for five years, ten years, or even more, during which time their smart home tech will be superseded by several generations of hardware.

And what of those homeowners that prefer Android that iOS? Around two-thirds of US smartphone buyers went for Android according to the most recent figures from researchers Kantar Worldpanel, while in China the figure is over eight in 10.

"We pick the devices that we put in there for longevity very carefully, and we ensure that they are interoperable on the basis of things like wi-fi standards, so that in the future if you want to take your Schlag door lock and move it from Apple HomeKit to Alexa, you don't have to change the door lock to do that, it's a simple DIY upgrade. We spent a lot of time on the hardware to make sure it's right and open enough to allow for the inevitable changes in the software," said Lennar Ventures' Kaiserman.

For those who really aren't into Apple or Android -- or for that matter smart home tech at all -- all the kit can still be operated in the same way as when they were analogue. With the "light switch on the wall vs the light switch on your phone -- sometimes you just want to turn on the darn light, you don't want to flip [the app] open and go through it", Kaiserman added.

And it's not just the next generation of homebuyers that builders are hoping will see the use of smart home tech in future.

By controlling hardware like air purifiers through their phones over the course of several years, homeowners will build up a fair chunk of data about the health, quality, and running costs of their home. That data could potentially be share by home sellers with their would-be buyers, much in the same way that they might share the council tax or energy star rating.

"I think that becomes almost like the Data Facts for your car, where it's a register for how the home has lived: it's kind of a health report for what's happened," Brookfield Residential's Foley said.

"In seven years time when you come to sell your smart home, I would anticipate producing some records of how the home lived and here are some of the data records of the condition of the home."

Join Discussion for: Apple's HomeKit, coming to a neighborhood...