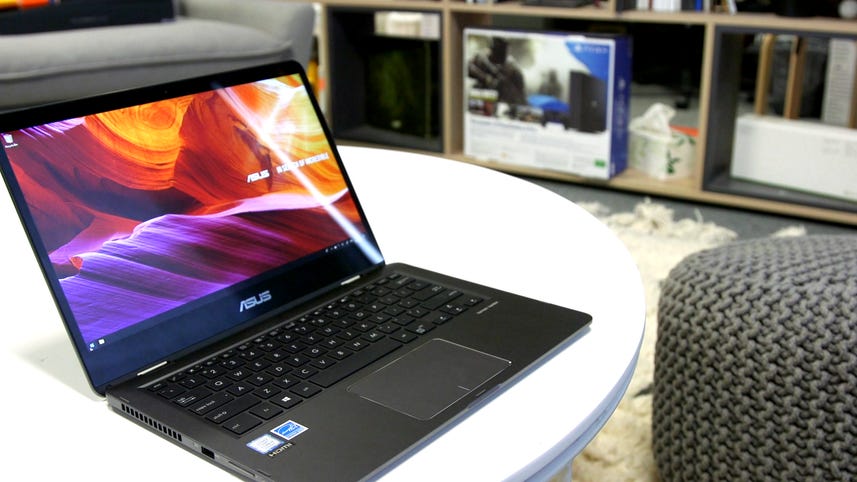 Asus has introduced six new ZenBooks at IFA in Berlin. The new laptops feature compact, lightweight designs and what the company described as "productivity enhancing features" for business and personal users, including a new dual-function touchpad.

The ZenBook 13 (UX333), ZenBook 14 (UX433) and ZenBook 15 (UX533) run on 8th-generation Core i5 or i7 processors with up to 16GB of RAM, 1TB of PCIe SSD storage and discrete NvidiaGeForce graphics (MX 150 on the 13- and 14-inch models, GTX 1050 Max-Q on the ZenBook 15). All three laptops come with a 3D infrared camera that allows rapid face login via Windows Hello. The new design also features ultra-slim NanoEdge bezels, giving screen-to-body ratios of up to 95 percent.

The 13-inch and 14-inch models make up for the lack of a number pad on the keyboard by incorporating an LED-illuminated NumberPad into the touchpad. The ZenBook 15, meanwhile, is big enough to accommodate a number pad in its traditional location.

The new ZenBooks currently don't have a release date beyond 'Q4', while Asus says that prices will be confirmed 'shortly'.

Like the ZenBooks described above, the new Flip models feature NanoEdge displays that make for a more compact chassis with a ten percent smaller footprint than previous models.

The Flip 13 and 15 are powered by 8th-generation Core i5 and i7 processors with up to 16GB of RAM and 512GB of SSD storage. The 15-inch model can also accommodate a 2TB hard drive. While the Flip 13 is limited to an integrated GPU, the Flip 15 has a discrete Nvidia GeForce GTX 1050 Max-Q chipset, plus the option for a PANTONE validated 4K UHD display -- features that make this model suitable for graphics professionals.

The Flip 13 has the dual-function touchpad with built-in LED-illuminated NumberPad, both models have the infrared Windows Hello camera, and there's an optional Full-HD 'world-facing' camera designed for use with Windows 10's Mixed Reality Viewer. Like the ZenBooks, the new Flip models are MIL-STD-810G compliant.

Asus ZenBook Flip 13 and Flip 15 will be available from mid Q4. Pricing has not been confirmed yet.

Asus also took the opportunity to show off the ZenBook Pro 14, announced earlier this year, at IFA. This 14-inch laptop is designed for "highly mobile artists, designers, programmers" and other "high performance professionals".

The ZenBook Pro 14 features 8th-generation Core i5 and i7 processors, up to 16GB of RAM, Nvidia GeForce GTX 1050 Max-Q graphics, a 1TB PCIe x4 SSD and Intel Optane memory -- a platform that allows this laptop to handle demanding tasks.

The key feature on the ZenPad Pro 14 is the ScreenPad, which combines the touchpad with a high-resolution secondary 5.5-inch touchscreen. Selected desktop apps -- including Microsoft Word, Excel, PowerPoint -- offer close integration with ScreenPad in order to boost productivity; ScreenPad apps can also be downloaded from the Windows Store.

The Asus ZenBook Pro 14 (UX480) will be available from late October, with pricing to be confirmed.

In addition to new hardware, Asus also announced new apps for the ScreenPad, allowing users to use new functions and features. New apps include Adobe Sign, Handwriting and SpeechTyper.