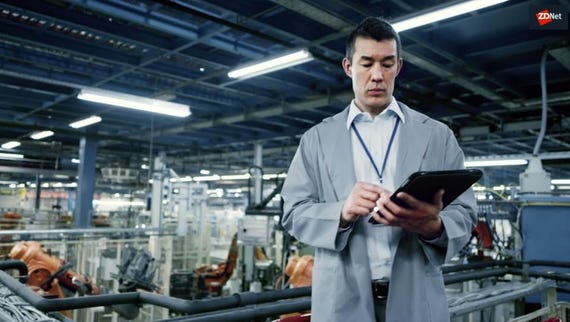 Automation is growing at pace in the workplace, and with it concerns that some employees will soon be out of a job if they fail to re-train themselves for the new roles that smarter industries will require.

But according to a new report from Microsoft, in collaboration with Goldsmiths, University of London, maybe you needn't worry so much: almost three-quarters of UK workers already possess the right combination of skills to thrive in the digital economy.

The report's conclusions stand out in stark contrast to recent warnings that the COVID-19 pandemic is accelerating the replacement of some jobs with new technologies. The World Economic Forum (WEF), for example, estimates that the next five years will see 85 million jobs displaced by automation.

While the WEF also predicted that 97 million new roles will be created in the same amount of time, the organization warned that access to these "jobs of the future" will highly depend on governments and businesses' willingness to retrain the workforce with the skills required to work in fields such as data, AI or cloud computing.

"There has been a lot of discussion about the need to retrain the workforce," Chris Brauer, director of innovation at Goldsmiths University, who co-authored the report in collaboration with Microsoft, tells ZDNet. "But we found there is an enormous potential that is yet untapped in the marketplace."

This "untapped potential" is referred to as the "next-gen worker" in the report. They possess two sets of skills: they are digital-savvy, and can easily use new technologies; but, with some help from tools such as low-code or no-code platforms, they also have the ability to create new systems for others to use.

The capacity to produce and not just consume is the key. According to the research, productive skills deliver nearly double the impact on business performance as the ability to consume technology. The good news is that most workers now have the means and desire to easily develop their capabilities on both fronts.

Microsoft and Goldsmiths' researchers established that up to 73% of the workers they interviewed demonstrated at once both high consumptive skills and emerging productive skills.

Of course, this doesn't mean that three-quarters of the workforce could suddenly start coding new software. Employees in the UK still report a critical need to learn how to use digital tools, with an overwhelming 69% of leaders reporting that their organization currently has a digital skills gap. Similarly, two-thirds of UK employees said that they did not have the appropriate digital skills to fulfil new and emerging roles in their industry.

When it comes to productive skills specifically, Microsoft and Goldsmiths' report shows that a meagre 17% of employees currently feel capable of creating new technologies for others to adopt. As optimistic as the report's conclusions are, therefore, upskilling and retraining are very much still a part of the picture.

What's more: according to Brauer, over a third of employees in the UK feel like their organization isn't adopting technology quickly enough, suggesting a willingness to engage with new technologies that businesses are failing to account for. "A lot of workers are in roles that don't maximize their talents or abilities, and they are hungry to make use of technology's capabilities to augment themselves and improve their work," says the researcher.

This has especially been the case during the COVID-19 pandemic, which has seen employee frustration mount as organizations fail to provide digital assistance. For example, a recent survey from the British Computer Society, the Chartered Institute for IT, found that 83% of UK adults had not received any support to improve their tech skills during the crisis.

Another report from HP also concluded that the pandemic had left many workers feeling abandoned by their employers when it comes to digital skills. As a result, showed the research, employees are actively taking the process of upskilling into their own hands: the majority (60%) of the workforce has been learning at least one new skill throughout the crisis, often through online programs.

According to Brauer, however, it is this renewed interest in acquiring skills that characterizes next-generation workers – and new technologies are burgeoning to help them do exactly that. One crucial enabler in the rise of the next-gen worker, says the researcher, is the fast development of low-code and no-code technologies, which let users create customized software without any knowledge of programming.

In only a few years, the technology has made big strides. Brauer remembers having to teach students, as part of an innovation management program he ran at Goldsmiths five years ago, high-level technical capabilities such as coding and data analytics, which were far from accessible for people with non-expert backgrounds.

"Using dashboards, modelling, forecasting, planning, allocating resources in an intelligent manner, tracking and measuring quality and results – now, these capabilities don't require the high-end production skills that were required before," says Brauer. "It's a huge opportunity to work better and faster, and to innovate with brand new tools for different tasks."

What next-gen workers, armed with low-code and no-code tools, will come up with is yet to be seen; but Brauer anticipates, among other innovations, more efficient management of data pipelines within organizations, as well as new tools to create value in industries that have been worst affected by the COVID-19 crisis, such as travel and tourism.

The remote-working marketplace is also set to undergo major disruption, as younger generations, who have been following classes and lectures on Zoom, enter the job market with plenty of ideas to improve remote-collaboration tools. Analysis firm CCS Insights, in fact, recently predicted that the next three years will see startups led by under-30s challenge today's market leaders in the space.

It will be up to individuals to commit to continuous learning, and to businesses to equip their workforce with the right tools to ensure that next-generation workers can thrive in the digital economy. Overcoming the digital skills gap will be no easy challenge; but the right conditions could unleash great potential that already exists among workers who are ready to embrace change.

Join Discussion for: Automation is taking jobs away. Low-code...