The company claims that the Spin 5 will last up to 15 hours with one battery charge.
Written by Campbell Kwan, Journalist on Jan. 5, 2020 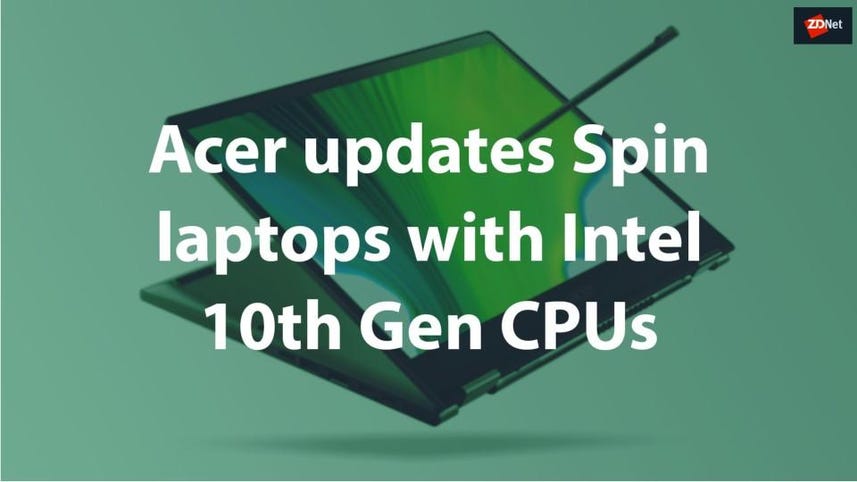 Acer on Sunday announced that it has updated its Spin series of laptops with two new models, the Spin 3 and Spin 5. The two new laptops will be powered by Intel's Ice Lake 10th Gen CPUs.

Much like previous Spin models, the Spin 3 and Spin 5 both have 360-degree hinges that allow for four usage modes: Tablet, notebook, display, or tent. They both also have an Acer Active Stylus that can be stored inside a charging slot in the laptops' chassis, which Acer claims can be used for 90 minutes of active writing after just a 15-second charge.

Internally, consumers will get a choice of either an Intel Core i7 or Core i5 processor for the Spin 5. It also comes with up to 16GB of RAM, 1TB of SSD storage, and Acer claims that it has provide up to 15 hours of charge from its 56Wh battery.

The Spin 3, meanwhile, has a 14-inch Full HD touch display that provides a 78% body-to-screen ratio. It weighs in at around 3.3 pounds, or 1.5kg, has one USB Type C port with Thunderbolt 3 support, two USB 3.2 Gen 1 ports, an HDMI port, and a MicroSD card reader slot.

Unlike Spin 5, consumers are limited to only Core i5 or i3 processors for the Spin 3. Battery life for the Spin 3 is also slightly less at a maximum of 12 hours. Beyond that, the Spin 3 has comparable internal specs in providing consumers up to 16GB of RAM and 1TB of SSD storage.

The Spin 3 will cost €650 and $700 in EMEA and North America, respectively. It will also be available at an earlier date compared to the Spin 5, with its release date to be in February for EMEA and April for North America.

On the same day, Acer also announced that it has expanded its line of ConceptD creator PCs with three new products.

The new ConceptD 7 Ezel and Ezel Pro are smaller versions of its Concept D laptops that were unveiled last April.

It also has two Thunderbolt 3 ports, an SD card slot, one DisplayPort 1.4 port, one HDMI port, and a fingerprint reader on its power button.

The Pro version shares the same specs as the regular ConceptD 7 Ezel, but it is configured with an Intel Xeon processor instead.

The ConceptD 700 workstation also features an Intel Xeon E processor, along with NVIDIA Quadro RTX 4000 graphics, up to 64 GB of 2666 MHz DDR4 memory, M.2 SSD storage as well as four internal storage bays that can support both 2.5-inch and 3.5-inch HDDs.

The ConceptD 700 also has three cooling fans, wireless charging for smartphones on its topside, and a pop-out headset cradle.

Meanwhile, the ConceptD 700 will initially only be available in EMEA in March, starting at €1,700.

The Taiwanese tech company in November said that it recorded its strongest performance in over two years. In the third quarter, Acer had consolidated revenue of NT$62.87 billion and net income of NT$1.18 billion, which were up 14% quarter on quarter and 29% year on year, respectively.