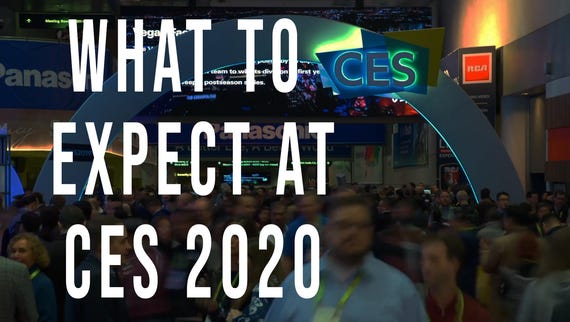 In the run-up to CES 2020, Jean Foster, senior vice president for marketing and communications at the CTA (Consumer Technology Association), spoke to ZDNet about the upcoming show, and the trends that will dominate the technology landscape in 2020.

What are the expected numbers for 2020?

"We're hoping to keep it about the same because when it gets much bigger than that, it starts to put pressure on the infrastructure. Increasing numbers is not our goal, so much as quality. We look at C-level and international attendees, for example -- non-North American attendees are about a third of the total, so it's truly a global show."

"We're looking at around 4,500 exhibitors, and are targeting about 1,200 in our Eureka Park area, which is our startup event. This is always an exciting part of the show. You've got startups from around the world, investors, and large corporates either looking to invest or acquire. Three or four years ago, it was around 700, and last year we had almost 1,200 -- again, we're tight for space in that part of the show."

Is Eureka Park likely to be spun off at some point, and become a separate startup-focused event?

"It's a possibility," Foster replied, with a smile.

"One thing I've learned is not to predict what the headlines are going to be! Last year the breakout was Impossible Foods -- food tech and food sustainability was a hot item in terms of media coverage. And John Deere brought in their massive industrial tractors because they're repositioning themselves as a data and AI company -- they're coming back again this year, and their stories are amazing."

Resilience and sustainability is a key focus for CES going forward, Foster said.

"We're starting to see a lot more tech in this space, be it in agriculture or municipalities -- it's about recovering from disasters either man-made or natural. We've got a whole conference program around resilience and have recently announced a partnership with the World Bank, where we issue a global challenge to the tech community to focus on health, gender barriers, and resilience in the face of disasters and climate change."

"A new area for CES this year is travel and tourism -- Delta Airlines' CEO Ed Bastian will keynote on the future of travel, which is the first time an airline has come to the show."

On which subject, is there any backlash over a huge trade show in the middle of a desert, with many thousands of attendees flying in from all over the world? Do you get environmental questions on this?

"We do get questions on that -- but we've also received recognition for our green initiatives. What our clients tell us is, they hit the ground to do deals, and for four days, our surveys tell us they do an average of 33 meetings. That really saves a lot. But travel and tourism are going to be a new exhibit area, as well as a new conference program. It's all around the traveler's experience -- facial recognition and biometrics for check-in, for example, and the in-flight experience."

Other now-established topic areas that will remain prominent at CES include smart cities and self-driving cars -- Daimler is keynoting for the first time, Foster said, adding that CES is now listed as one of the top ten car shows in the US.

Is there a likelihood that, as every company effectively becomes a tech company and ever more exhibitors want to join in, CES as currently constituted could outgrow itself? Are there other ways to do this?

"We do CES Asia in Shanghai, and various pop-up events in Europe and the Las Vegas Convention Center is expanding over the next three or four years."

So it's probably business as usual for 2021, at least.

All of this expansion in terms of topic areas and exhibitors is driven by a nexus of technologies such as 5G, IoT, AI and edge computing, but the traditional role of CES as showcase for hot new consumer products remains, Foster said. "You've still got that: you'll see some 8K TVs this year, you'll have the robots, AR and VR -- more about the use cases than the latest headsets."

"Digital health is another big growth area -- between 2018 and 2019 our digital health footprint grew by 25 percent, moving beyond fitness trackers to true digital health. Medical professionals are now using the data from our devices to actually diagnose and treat patients, and we have a program where we're working with a number of organisations to give US medical professionals Continuing Medical Education credits by coming to the tech show."

We must, course, mention the 2019 sex toy award incident at this point -- do you expect to get bitten by something like that again?

"We came out of the show last year and said, 'let's revisit sex tech', and we've agreed it's going to be part of the show -- part of Health and Wellness. We've put some parameters around what will be allowed -- it has to be a tech product, for example -- and we have a number of companies that will be demonstrating this year."

Do you bemoan the absence of certain big tech companies from the show floor -- Apple and Microsoft, for example?

"Not really, because they do participate. For example, we have a roundtable session with the chief privacy officers of Apple, Facebook and P&G, onstage together with one of the FTC chairs. This has garnered a lot of media interest, and should be a really interesting discussion."

Would it be fair to say that the consumer tech industry has created a security and privacy time bomb by releasing millions of insecure IoT devices into the wild? Will we spend the next decade or so dealing with the consequences?

"You'll see a lot of programming around that at the show -- and this is the stage we should be having those debates on...it's a global stage. If you look at something like privacy, you've got China, you've got the US, and Europe literally in the middle. My CEO calls it the 'Goldilocks situation' -- one is too hot, one is too cold, what's just right?"

"The problem we're seeing in the US is that each of the states is starting to do their own thing, which is not sustainable if you're a small company -- California's Consumer Privacy Act, which is closely modelled on GDPR, is rolling out in January, for example. So what we're saying is, 'let's go for one standard and make it a Federal standard versus state-by-state', because if you're a small organisation you don't have the resources to manage that. For me, in my day job, that's a marketing and communications challenge -- best practices in data stewardship."

NOTE: This interview was conducted before the announcement of Ivanka Trump's keynote at CES 2020.

Join Discussion for: CES 2020 and beyond: What to expect