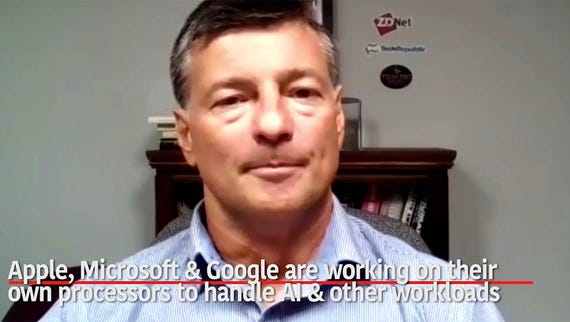 Apple, Microsoft, and Google are working on their own processors to handle AI and other workloads
Watch Now

Artificial intelligence, cloud computing, big data and the Internet of things along with a heavy dose of mobility are rewriting the semiconductor pecking order. This shakeout is going to be fun to watch.

In this new world order, novel workloads (think AI) are forcing customers to design their own processors. Dominant companies (think Intel) may become less dominant. ARM meets the data center. And former challengers like AMD launch comebacks based on GPUs, an area dominated by Nvidia. And don't forget the Internet of things, another market trend that'll likely benefit Qualcomm.

Intel CEO Brian Krzanich summed it up following the company's strong second quarter. "We continue to see intense competition across our businesses. That's the reality of the attractive markets in which we participate. The competition makes us stronger, and we're ready for it," he said.

Let's think through the moving parts:

We could go on, but the trend is clear: What used to look like an Intel and Qualcomm world has been blown apart by AI, analytics, big data and new workloads. The processor world order is now in flux.

Because of this AI-driven processor scrum, the pecking order is being revamped.

Here are a few thoughts on some of the key companies to watch:

Nvidia. The company has the most solid footing as workloads change. Nvidia saw the promise of its GPUs in the data center early and made some big enterprise bets. Whether Nvidia GPUs are used in the cloud or data center, the company is positioned well.

AMD. The company delivered a solid second quarter, but the profits are modest. Dr. Lisa Su, CEO of AMD, talked about the value market, which is traditionally AMD's playground, but spent a lot of time on the data center potential. Su said:

Our investments in GPU compute and Radeon Instinct are continuing to build momentum. We introduced our first Vega-based Radeon Instinct data center products in June. These new GPU accelerators will significantly increase performance, efficiency and ease of implementation for machine learning and high-performance computing workloads. We also showcased a server powered by AMD's EPYC SoC and 4 Radeon Instinct MI25 accelerators, working together to deliver groundbreaking performance of 100 teraflops.

Su added that server makers, contract manufacturers and cloud providers have had high interest in EPYC. Here's the rub: Intel and Nvidia have scale and pricing power and the more competitive AMD gets the more likely there will be a response from larger players. Su said AMD remains confident.

"Obviously, we continue to watch the competitive market. It's been an exciting market. Some would say that, from a product standpoint, there has been a bit of back-and-forth already. We feel good about how our products are positioned not just today but how they will be positioned over the next 18 to 24 months. And so we're going to be very focused on ensuring that we lead with the product message," said Su.

Qualcomm. While the focus is on mobile, don't forget that Qualcomm will have NXP in the fold via acquisition. And that reality means Qualcomm will be an Internet of things and connected auto player. Not surprisingly, Intel is eyeing those markets too. The NXP deal, expected to close by the end of 2017, will give Qualcomm about $30 billion in annual revenue as well as new markets. The combination of Qualcomm and NXP is going to be a force in the IoT market. In other words, Qualcomm's footprint will go well beyond wireless, Snapdragon and the upcoming 5G transition. In addition, Qualcomm expects to ship processors for the data center by the end of the year.

Intel. The future of Intel is the subject of ongoing debate. Intel has a dominant data center position and has promising new markets, but the shift to parallel computing and IoT may be tough to navigate. Jefferies analyst Mark Lipacis downgraded Intel shares earlier this month because of competition from Nvidia, AMD and ARM. Intel's Mobileye purchase may really be about thwarting Nvidia's car to cloud, data center connection

We argue there is a tectonic shift in computing toward a parallel model, and as the incumbent with dominant share, we think Intel has the most to lose. Our field checks indicate Intel's Xeon/Xeon PHI platform is disadvantaged vs. Nvidia in emerging parallel workloads, and we expect share loss to Cavium's ThunderX and AMD's EPYC in traditional workloads.

One wild card is that Intel's manufacturing know-how can turn into a cash cow no matter what processor maker gains.

Lipacis argued that Microsoft's support of ARM in the data center is a watershed moment and that Intel will lose data center share due to competition on multiple fronts. Perhaps the biggest argument is that Intel has the most to lose as new computing models rewrite the semiconductor industry.