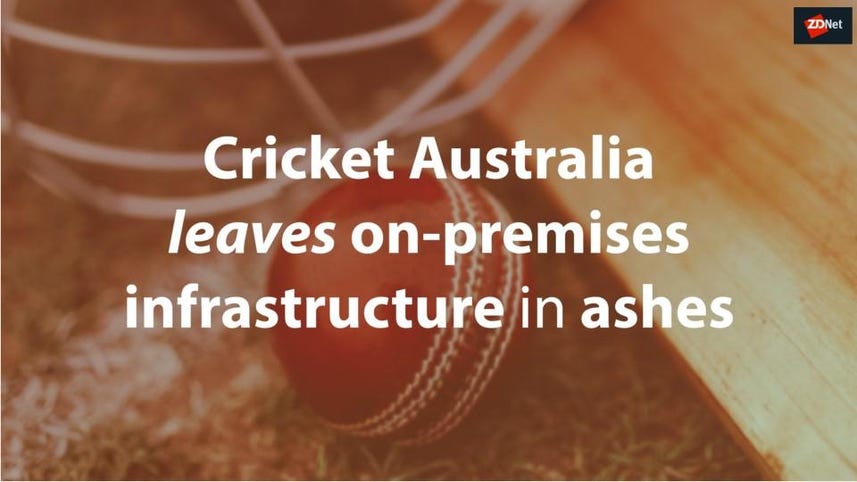 Cricket Australia is the national governing body for the game in Australia. The organisation's vision is for cricket to be Australia's favourite sport, and a sport for all Australians.

While its purpose is to unite and inspire communities through cricket, the national body and its six state and two territory associations were previously operating in silos while its workforce of 1,300-plus were trying to achieve the same underlying goal.

In a bid to consolidate its nationwide presence, Cricket Australia turned to Microsoft, starting with reducing its licensing arrangements down from nine.

It has now deployed the Microsoft Azure cloud, Office 365, and Teams across its entire organisation.

The transformation of Cricket Australia started back in 2011, off the back of a 3-1 loss in the Ashes. The organisation held a review which provided recommendations about the need to work effectively as a national body, and to promote high performance training opportunities.

"A lot of the themes that came out of that sort of underpin that there was a need for collaboration for states and territories, and Cricket Australia, to be working closer, towards the same sort of goals," Murray Newham, senior manager of cloud platform and architecture at Cricket Australia, told ZDNet.

At the time, Cricket Australia was a logistical nightmare comprised of nine separate cricket organisations that were connected by a wide area network, but each possessed their own email servers and active directory domains.

Newham said prior to the transformation, the organisation lacked the ability to collaborate at a technological level.

"We really were nine separate IT organisations," added Michael Osbourne, GM of technology at Cricket Australia. "The whole organisation pretty quickly understood that we couldn't keep operating like that."

He said it took Cricket Australia about 18 months to shift from nine separate IT shops to one national IT shop.

"I think it's really opened the doors for other types of collaboration -- that just brought people closer together," he said.

"Off the back of [the review] we could sort of see that there was really a need for us to stop treating each other as separate organisations and start working towards the one goal of cricket prospering in Australia," Newham added.

According to Osbourne, when the organisation started looking at how to work better together, he said it was "sort of a no brainer" that cloud was the answer.

"So you know it's available, it's accessible, it's reliable, secure, it's fast, and we can access it not only anywhere in Australia but anywhere in the world where the teams might be playing," he told ZDNet.

"So for us it was it was a bit of a no brainer to modernise everything and get it all up into the cloud."

As one of the final stages of the organisation's multi-year uplift strategy, Cricket Australia shuttered its managed data centres in April.

"Over the course of those couple of years we've managed to migrate a lot of the key business systems out of our managed data centre and into Microsoft Azure cloud. And we did get to a point in April earlier this year where we were able to de-tangle the rest of the bits which were networks and that sort of stuff, put in a high capacity network and actually close the doors on the data centre," Newham said.

"Even just being able to share documents, communicate via video conference -- those sorts of capabilities that having a single Office 365 tenancy with something like Teams underpinning that collaboration is really powerful," he said. "We use teams extensively ... and I think one of the last pieces for us will be Teams calling, which we're rolling out at the moment."

"It really focuses on a number of aspirations in terms of junior cricket itself and how we can deliver digital experiences in the community that are on par with the kinds of consumer experiences that people are enjoying right now," Osbourne said.

"That's a pretty bold aspiration ... to get the support of the community, the apps, the MyCricket-type infrastructures to the point that they'd be comparable to the big consumer experiences that many of us are very fond of."

Cricket Australia is now kicking off a pilot with Microsoft around how to enable the community cricket clubs around the country, by giving them tools to collaborate better, to run their committee meetings more efficiently, and to store their documents, as some examples, more effectively.

"We're going to be piloting some stuff this summer with a handful of clubs to start exploring how we can get this collaboration capability we've built internally and start to make that available to the clubs around the nation," Osbourne explained.

Additionally, Osbourne told ZDNet that Cricket Australia also has aspirations around the viewing experience and the data it possesses, specifically how it can be used to deliver tailored experiences for fans.

"And of course the innovation ecosystem around sport is immense ... so with the right cloud strategy and the right platforms and the right micro services-based infrastructure, our ambitions allow that innovation to plug into the ecosystem," Newham said.

"Why recreate a fantastic way of alerting teammates to the training schedule if someone else has done that, let's plug that into the ecosystem and make that work, and allow the literally hundreds of thousands of volunteers, millions of participants, to enjoy the game the way they want to."

Cricket Australia in June detailed it had teamed up with HCL Technologies.

Under the arrangement, the Indian outsourcing giant will have responsibility for the organisation's various sites -- such as cricket.com.au, bigbash.com.au, and community cricket hub MyCricket -- as well as the organisation's live app. HCL said it will provide a "platform of platforms" that makes use of infrastructure from both HCL and Cricket Australia, as well as integrate products from other vendors.

Understanding Microsoft's grand vision for building the next generation of apps

Understanding Microsoft's grand vision for building the next generation of apps