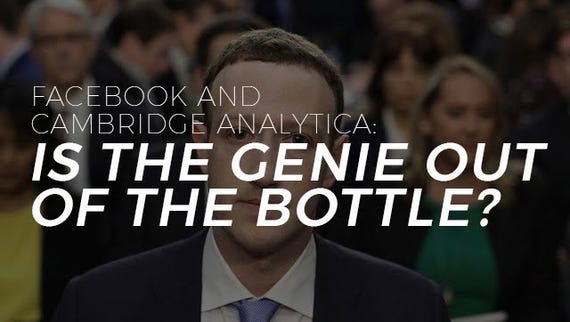 Facebook and Cambridge Analytica: Is the genie out of the bottle?
Watch Now

After months of scrambling to tamp down controversy after controversy, Facebook CEO Mark Zuckerberg on Tuesday kicked off the annual F8 developer conference by attempting to strike a positive note.

"We have real challenges to address, but we have to keep that sense of optimism, too," he said during his keynote address in San Jose, California. Facebook and the developers on its platform, he said, "have a responsibility to move forward... to keep building services that help us connect in meaningful new ways."

Since mid-March, when a whistleblower exposed how the London-based firm Cambridge Analytica mishandled data culled from tens of millions of Facebook profiles, Facebook has faced a slew of bad headlines. It's responded in part by scrambling to change its developer platform, shutting down several APIs as part of its ongoing effort to improve user security and privacy. While Facebook has made an effort to extend assistance to developers affected by the abrupt changes of the past few weeks, many of those changes came without any notice.

"I know it hasn't been easy being a developer these last couple months, and that's probably an understatement," Zuckerberg said at the start of his speech. He profusely thanked the developers on the platform and announced that Facebook is re-opening app reviews so developers can keep moving forward.

The CEO ran through the many steps that the company is taking to improve data privacy and security on the platform and to address problems like "fake news" and election manipulation. He announced some new steps the company is taking, like building a new feature called "clear history."

However, he said, "the hardest decision I made this year wasn't to invest so much in safety and security. The hard part was figuring out a way to move forward on everything else we need to do, too."

Zuckerberg insisted that the company is adding value to the world by building technology that is focused on people and relationships. "If we don't work on this, the world isn't moving in this direction by itself," he said.

He ran through a slew of new features and products Facebook is rolling out for its various platforms, such as "Watch Party," which gives users a way to watch video content together and chat with each other.

Zuckerberg showed a video of himself testifying before Congress, with a conversation happening alongside it. "Let's not do that again any time soon," he said to laughs.

Facebook is also adding a dating feature to the platform. Zuckerberg noted that one in three relationships in the US start online.

While Zuckerberg repeatedly appealed to developers to join Facebook's cause to connect the world, he had one other announcement to win over the crowd: Everyone at the conference is receiving a free Oculus Go. The announcement drew the loudest cheers from the crowd, with one person shouting, "Thank you!" once the applause died down.

Join Discussion for: Mark Zuckerberg's plea to developers at F8:...