The startup IOTAS is equipping multi-family housing units with IOT technology designed for tech-savvy young people who don't yet own a home.
Written by Stephanie Condon, Senior Staff Writer on Sept. 19, 2017 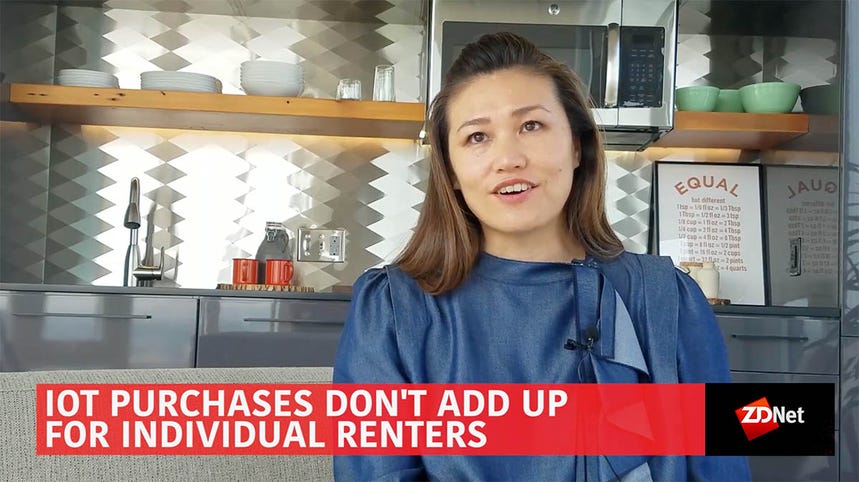 When a young millennial ventures out to find a new apartment, they likely have a list of desired amenities. Along with perks like a gym or close access to public transit, it's possible they're thinking about home connectivity. After growing up with the iPhone, using an app to control home devices may seem perfectly natural.

But as a renter, particularly one moving into a multi-family unit like an apartment building, setting up IoT devices like smart thermostats and smart locks is no easy task. Given the terms of the lease agreement, it may be impossible.

"To buy these devices costs a lot of money in the first place," said Sce Pike, CEO and founder of IOTAS. "To set it up, and then six to 12 months later when they move -- because [renters] move often -- to uninstall it, to pack it up and then reinstall it is a lot of time and effort and money."

For renters, she says, "The whole notion of owning [these devices] just doesn't make sense. It should just be there as part of the fabric of your home."

That's why Pike started IOTAS (which stands for IoT as-a-Service), which works with real estate developers and ownership groups to bring IoT to multi-family home units. The Portland, Oregon-based company essentially outfits all of the apartments in a building with smart equipment, including outlets, light switches, thermostats, door locks and other voice-activated features.

When a renter moves in, they download an app that gives them a floor plan of their apartment and control of all of its connected devices. There are currently 10 pre-set automations on the app, including "good morning" and "welcome home" settings that trigger certain functions when a person walks in a room. The preset automations work, Pike said, "because we know where everything is, how it should work and how it should be controlled."

The company does give property managers anonymized and aggregated data that Pike says can help "improve on the residential experience." For instance, a property manager may want to know when units are mostly vacant, so they can test fire alarms at an optimal time.

Pike started the company after working with large corporate clients to assess smart home technologies and realizing that the typical early adopter wasn't likely to be a homeowner. Indeed, one survey last year showed that the most typical IoT owner is a relatively well-off millennial (between the ages of 18 and 34) parent. At the same time, data shows that two-thirds of households headed by young adults - those younger than 35 - are rentals. In fact, the Pew Research Center recently reported that more Americans are renting now than at any point in the last 50 years.

The market for IoT devices should grow considerably in just the next few years: According to Cisco's annual Visual Networking Index, machine-to-machine (M2M) connections that support IoT applications will account for more than half of the world's 27.1 billion devices and connections by 2021. In North America, the average household will have an average of 23 devices by 2021, Cisco predicts, including 13 M2M connections.

Consumers, renters included, don't need convincing when it comes to IoT adoption, Pike said. Instead, her company has focused on convincing the real estate industry that connectivity is a worthwhile investment. IOTAS has so far outfitted buildings in more than 10 cities across North America.

"The real estate industry wants differentiation," she said. "This is where we can help create a turnkey solution for them ...to make it super easy to offer a new amenity for their residents."

While some industries can be slow to embrace new technologies, Pike says the real estate sector is quick to adapt to consumer preferences.

"It might be because the real estate industry is not as heavily regulated," she said, "but I think it's also knowing their core demographic is a younger generation, and they have to accommodate for them. When I started this company in 2014, they didn't know what IoT stood for. In 2017, they're talking about how to change building designs to accommodate for drone deliveries... dropoff zones for autonomous vehicles...They're quick to see these patterns and changes. It's an amenities arms race."