At its core the Samsung Note 10 is a business and productivity device and even a mobile computing platform, but a smaller version aims to reach consumers, enterprise buying programs and more creative pros.
Written by Larry Dignan on Aug. 7, 2019 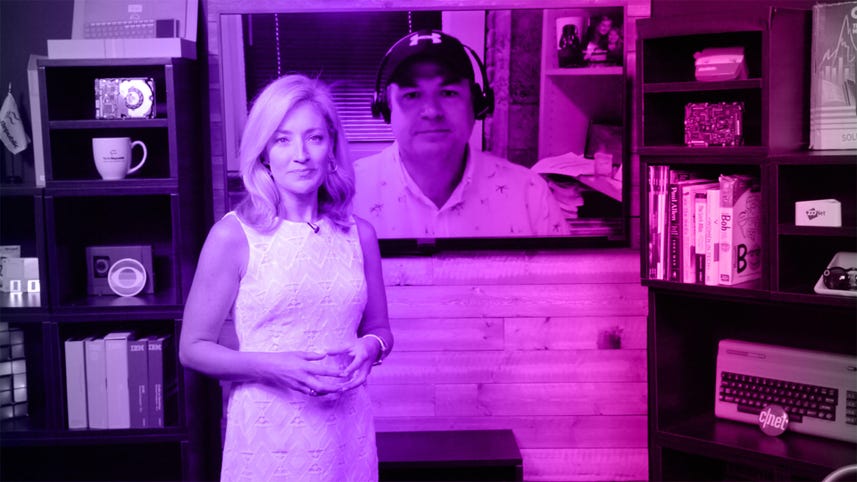 Samsung launched its Galaxy Note 10 lineup including a smaller-screen version that is designed to expand into the consumer market as well as court more corporate buyers even as it keeps its base of "productivity happy loyalists."

For Samsung, the Galaxy Note 10 line provides an interesting needle to thread. The marketing punchline revolves around the Galaxy Note 10 that has a 6.3-inch screen, the trademark S Pen and a price tag under $1,000 at $949. The Galaxy Note 10 is the slimmest and thinnest Note device but lacks a power-user friendly MicroSD card. The primary takeaway is that Samsung is going with two sizes to expand its market potential.

The Galaxy Note 10 Plus, which has a 6.8-inch screen and starts at $1,099, is designed for the Note loyalists and the Samsung productivity types who want to use the device as a PC via the DeX system, take notes with annotations and share via multiple formats and give presentations with "Air Gestures" that turn the S Pen into a magic wand of sorts. A 5G version of the Samsung Galaxy Note 10 Plus is also available via an exclusive with Verizon, but the footnotes highlight that the Samsung Galaxy Note 10 Plus 5G will utilize a "5G Non Standalone (NSA), Sub6 / mmWave" network.  That version of 5G is slower and may not work with future networks that will be standards-based--all for a starting price of $1,300.

Nevertheless, Samsung's DJ Koh, CEO of Samsung's mobile division, made the pitch at the Unpacked event that the Note 10 is more of a mobile platform that links hardware, software and services. 5G will enable more connections that will create "new frontiers."

Koh also talked up 5G even though the rollout of networks is more promise than reality at the moment.

Taher Behbehani, general manager of Samsung America's Mobile B2B unit, said in an interview that the Galaxy Note 10 is also designed for mass enterprise deployments. In other words, should the Galaxy Note 10 as consumer device narrative fall flat, enterprises may take the device and deploy it in the field because it's more cost-effective.

Also: Samsung's Galaxy Note 10: Here are the questions you need to answer before buying

Behbehani said that SMBs and creative pros would find Galaxy Note 10 to be a productivity device. Enterprises may view the Galaxy Note 10 line as a thin client to replace PCs. And Samsung is really selling an open "mobility platform" that can use DeX to connect to Apple Macs as well as Windows 10 PCs and integrate with Microsoft Office, which is bundled, as well as other tools.

"The end game for us is to remove friction for the end-user, CIO, and CISO (chief information security officer)," said Behbehani. The Samsung plan revolves around courting the bring your device crowd as well as delivering devices to corporate-liable plans.

Ultimately, Samsung plans to push the Galaxy Note 10 line into the industries where the B2B unit has the most success--retail, financial services, and banking and transportation and logistics.

Samsung's Galaxy Note 10 is based on the now proven concept that work and life are blurring together. In 2011, the Note kicked off a phablet craze. The Galaxy Note 10's promise revolves around being productive, sparking creativity and delivering design, power, and performance.

The big question is whether the Galaxy Note 10 will be viewed as an incremental upgrade in a tweener year before 5G networks roll out or an upgrade opportunity for Samsung's base.

Colors like Aura Glow, Aura White, Aura Black, and Aura Blue are designed to pluck colors from art and fashion. A unibody S Pen matches the design of the phone and can be handy for everything from note-taking to presentations to moving the camera around.

Meanwhile, a budding partnership with Microsoft has enabled Samsung to bundle Office and apps with the Galaxy Note 10. Via DeX Note, 10 customers can swap files and use the phone and PC simultaneously. DeX will support Windows 7 as well as Windows 10 and connect to the Apple Mac.

Like most Samsung launches, the Galaxy Note 10 debut features its share of features you didn't know you needed and may never use. Samsung often takes the kitchen sink approach to new features.

Here's a look at the key features of the Galaxy Note 10.

Samsung's Galaxy Note 10 includes a new ability to use the S Pen as a magic wand that can move a camera around and advance a presentation.

In a brief hands-on, I couldn't quite get the Air Gesture feature to work consistently. It wasn't clear whether I should point the S Pen at the camera or flick it on the side to pan a camera, advance a gallery or go to a new slide.

Simply put, there is a learning curve with Air Gestures. I found myself reciting press, swipe and let go to get anywhere.

Behbehani said that Air Gestures could also work in industries beyond sales presentations, including dentists who may want to highlight something without touching the screen. The hope is that developers will take the S Pen software developer kit and add more functions.

"We are getting more developers, but not as much as we want. We will launch programs to the developer community, and the Microsoft partnership is important to that," said Behbehani.

Samsung's Galaxy Note 10 line also includes links to Windows and the ability to sync devices. The idea here is that Galaxy Note 10 can work in a multi-device environment and ultimately enable customers to leave the PC at home.

In other words, you can use your Galaxy Note 10 and PC apps side by side. DeX also has virtual terminal software via Citrix and VMware to run on any machine including the Mac.

DeX can be important for field workers, and the Windows connections are built-in. For enterprises, DeX may be a way to squeeze more life out of a PC and connect legacy apps with the smartphone. Samsung's more cozy relationship with Microsoft can make DeX more of a realistic work companion with the Galaxy Note 10.

The Link to Windows feature is now integrated into the Galaxy Note 10 Quick Panel for one-click assess.

With the Galaxy Note 10, Samsung revamped its Note app that will make it easier to convert handwriting to text and share information via multiple formats.

Behbehani said the Note app overhaul would be useful to the enterprise even as it competes with Microsoft's OneNote. He added that the S Pen would work with both applications.

In addition, Samsung improved handwriting recognition by adding thousands of samples to its algorithms. Other tools such as zoom and edit and easy conversions make the Note app more useful.

The camera and augmented reality

Much of the camera advances have also been included in the Galaxy S10. Samsung executives highlighted a native video editor and deal for customers to upgrade to Adobe Rush.

While the camera and tools like AR Doodle, which allows for augmented reality notations, may primarily appeal to consumers, there is a business case. For instance, easier sharing and effects like live focus video, zoom in microphones, and super steady shots can be used for business.

Compared to previous Samsung launches, the camera on the Galaxy Note 10 didn't get a lot of play.

Specs and the 5G question

Some selected specs include:

Should you upgrade? Unless you're buying the Galaxy Note 10 Plus 5G version, there's a major futureproofing question to consider.

The Samsung Galaxy Note 10 Plus with 5G will run you $1,300 as a Verizon exclusive to start, or $1,400 for the 512GB version. That 5G version runs on Verizon's proprietary version of 5G. In other words, the Galaxy Note 10 Plus with 5G will deliver high speeds with millimeter wave technology, but be best suited for cities since the technology doesn't travel long distances and can be blocked by buildings and trees. Here's everything you need to know about 5G.

That sum is a lot to pay for a network that will be commonplace a year from now and have standards that are more fleshed out.