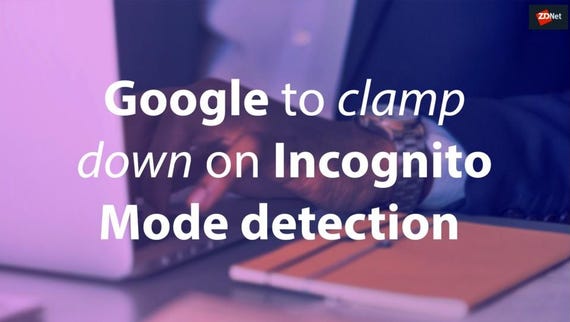 Google to clamp down on Incognito Mode detection
Watch Now

Google is taking a proactive approach to announcing Pixel 4, the company's next smartphone. First, Google posted a teaser image revealing a unique camera array and the basic design on Twitter. On Monday, the company confirmed the Pixel 4 would have face unlock and motion gestures.

Motion Sense is powered by Project Soli and uses radar to detect gestures that will allow you to control the phone, performing tasks like controlling music, snooze alarms, or silence phone calls. The Pixel 4 will be the first device to feature Soli, which comes from the Advanced Technology and Projects team (ATAP).

Apple's Face ID feature on the iPhone only works when the iPhone is vertical, with the TrueDepth camera system at the top of the phone. Apple uses the same system in the iPad Pro, and it works in any orientation, but that feature has yet to come to the iPhone.

Google also posted a picture of the various sensors and components that are found at the top of the Pixel 4 to enable Soli and face unlock. There are two infrared cameras, a front-facing camera, a proximity sensor, a dot projector, a flood illuminator and the Solid radar chip just above the Pixel 4's display. According to Google, your facial information stays on your phone in the Pixel's Titan M security chip and never leaves your phone.

Samsung will launch the Note 10 in early August, Apple should announce the next iPhone in September, and then Google usually releases new Pixels in October. By talking about features or revealing what the Pixel 4 looks like ahead of its launch, Google keeps the Pixel conversation going as we enter a busy time of the year with multiple smartphone launches. It's a smart marketing approach, as long as Google can deliver a phone that lives up to the expectations that it's creating. Hopefully, we continue to learn more about the Pixel 4 leading up to the announcement, but Google also holds back a few surprises for the announcement.