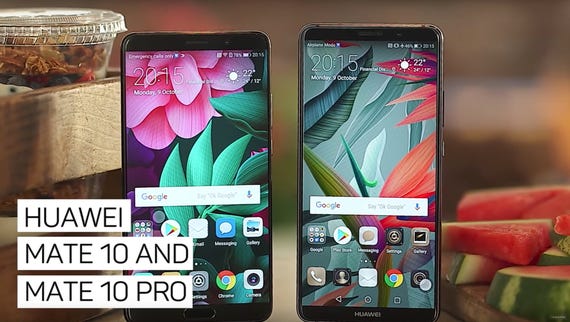 Mobile enthusiasts have been using Huawei smartphones for years, and even pronouncing its name correctly, but most in the US have not been exposed to its name or its phones. Huawei is putting an undisclosed sum of money into a marketing effort to change that in 2018, starting with a name recognition campaign.

One part of this strategy, led by new SVP of marketing, Ketrina Dunagan, to launch Huawei's "New Era of Connectivity" is by enlisting one of the world's most recognized women in entertainment, Gal Gadot, as its new chief experience officer. We've seen failed brand promotion in the past with high-profile figures, but Gadot may be successful given that she has been using Huawei devices since the P8 release and so is an actual user of Huawei's products. Hopefully, we don't catch her tweeting from an iPhone soon after this press conference.

Dunagan joked that Huawei has a name pronunciation issue in the US, just like Gadot. By the way, her first name, Gal, is pronounced like "ball" with a hard g and her last name is pronounced "Guh-dot." Actually, Huawei showed a billboard that shows the words "Wow Way" in an attempt to get people closer to pronouncing its name correctly. I'm now sure why the sign doesn't show "Wah Way," as that is the actual pronunciation. It may have been easier to just use the Honor brand for all products in the US.

I've been using the Huawei Mate 10 Pro for a couple of months, and it is fantastic. It's been out in other parts of the world since then, so we don't need to rehash everything we know about the device.

We've experienced unprecedented growth worldwide and are now bringing our award-winning products to the U.S. Huawei is and has been in the U.S., and is part of a community of visionaries that strive to push boundaries and improve daily lives through technology. Our newest consumer solution, the Huawei Mate 10 Pro, is the smartphone that U.S. consumers need and deserve.

For US customers, Huawei is going to also focus on promoting the privacy and security aspects of the Huawei Mate 10 Pro and other smartphones. This is important for the enterprise and for Huawei since past actions by the company have government officials apprehensive about supporting the company.

The Wall Street Journal just posted yesterday that AT&T may have backed away from a Mate 10 deal due to the US government. If Huawei can find some success in the open channel market, that will be better for consumers, since AT&T loads a ton of bloatware on its devices and would likely also slow down the release of software updates promised by Huawei.

Huawei is committing to guaranteed two years of regular Android security updates and has four areas of security and privacy that are important to understand. These include:

Huawei promotes its advanced AI in the Kirin processor and one important aspect to understand is that Huawei's AI lives on the device and not in the cloud. Many things related to security and privacy are found on the handset itself so you can still maintain security without a connection and also trust your information isn't being exposed to hacking.

Huawei will launch the Mate 10 Pro in titanium grey, midnight blue, and and mocha brown for $799 at Best Buy, Amazon, Microsoft, Newegg, and B&H Photo. It will be on pre-order from Feb. 4 to Feb. 17, with general availability on Feb. 18. Some retailers will offer $150 gift cards with the purchase, saving you even more money. Given that Google Pixel 2 XL devices start at $849 and the Apple iPhone X at $999, $799 is a reasonable price for a high-end flagship with these advanced features.

However, most people today in the US buy phones through carrier or store payment plans. Some of these retailers do have such payment plan options in place, but it seems that Huawei should have something setup directly from it as well.

I didn't expect to hear this, but Huawei will also be making the Porsche Design Mate 10 available for US customers for $1,225. It will launch in mid-February as an unlocked GSM phone.

Join Discussion for: Huawei launches unlocked Mate 10 Pro in US,...