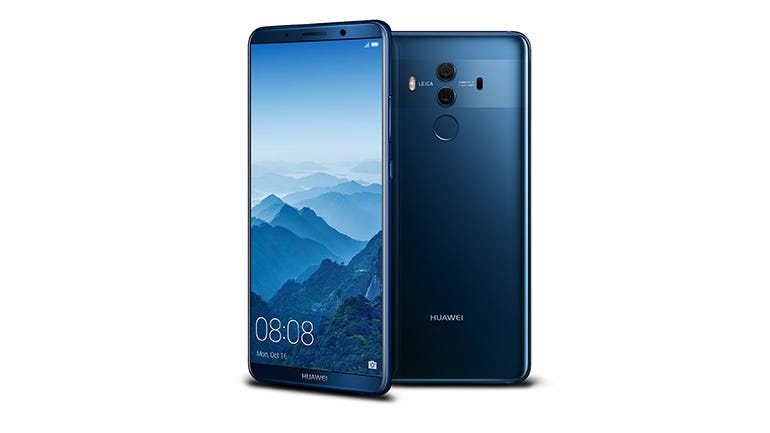 Huawei has established a trend of releasing standard and 'pro' versions of its flagship Mate handsets, and the latest models continue that trend. In fact, there are three versions of the Huawei Mate 10. In addition to the Mate 10 and Mate 10 Pro, there's an even more expensive Porsche Design version too.

I was sent the large-format (6-inch) Mate 10 Pro to review. It's bursting with top-end features, including Android 8 (Oreo), the Kirin 970 processor with integrated AI (which affects many aspects of the phone, including photography and energy efficiency), a Leica-branded dual-lens rear camera and dual 4G LTE SIM support.

The Huawei Mate 10 Pro is a large handset, although given its 6-inch screen it's not oversized. That's because of the almost absent bezel on the handset's long edges and minimal top and bottom bezels. Huawei calls this arrangement FullView -- well, every edge-to-edge screen design needs a name. Notwithstanding the small bezels, don't expect to squeeze this 74.5mm by 154.2mm by 7.9mm handset into every pocket, and do expect to notice its 178g weight.

One ramification of the small bottom bezel is that the fingerprint sensor sits on the back of the handset. I found this comfortable to use -- indeed, on a large phone it's much easier to get at one-handed than a sensor that's beneath the screen.

There is a range of things you can do with the fingerprint sensor regardless of whether it's used for login. Without registering a fingerprint you can make both tap and glide gestures to answer a call, take a photo, browse photos and more. If you want to use fingerprint login, I found it fast and reliable.

I was sent a Mocha Brown review sample which looks distinctive and rather smart. Other options are Midnight Blue and Titanium Gray (and, if you're in China, Pink Gold). In each case the edges are made from aluminium and the backplate is reflective and slippery glass. It's not really to my taste, and it's not the most grippy of materials. It's also more vulnerable to smashes onto pavements or drops down stairs than an all-metal chassis would be.

The handset comes with a clear plastic shell that offers more grip than the glass, but adds bulk and weight and changed the bronzed brown colour of my handset to a more grey-like colour.

The Mate 10 Pro has IP67 certification for dust and water ingress. This keeps up with the flagship smartphone market, but seems to have come at the expense of a 3.5mm headphone jack. Huawei provides a USB-C headset and a USB-C-to-3.5mm jack adapter, otherwise you can go wireless. The Mate 10, incidentally, has a headphone jack, but lacks an IP rating.

The 6-inch screen has an 18:9 aspect ratio. That's relatively rare on handsets, although the LG G6 and Samsung Galaxy S8 are two top-end models that share it. The resolution of 1,080 by 2,160 pixels doesn't break any new ground, but the resulting 402ppi pixel density is perfectly good enough for everyday use.

This aspect ratio can leave a significant black strip to the left and right of wide-screen YouTube streams, although I stopped noticing these after a while. It also results in a taller-than-usual portrait mode screen, which might please those who do a lot of web browsing or ebook reading.

I'm certainly sold on the taller screen, but not so enamoured of the knuckle gesture that's needed to create a split screen for viewing two apps at once. The idea is sound, but I found it a bit hit and miss. Maybe I just need more practice. One thing I'm certainly glad to see is the ability to connect a larger screen via USB-C to HDMI. If nothing else, this will be useful for on-the-go presentations.

The OLED panel is beautifully bright and clear. It supports HDR10, a specification for HDR content that's increasingly popular on handsets (and other devices) and which helps ensure that visuals get close to what the creator intended.

In addition, Huawei provides a couple of familiar utilities that allow you to tweak the screen. Eye Comfort mode reduces blue light, which is great for those late-night reading sessions. This can be set to switch on and off automatically at set times. You can also manually fiddle with the colour temperature, and play with preset colour modes, toggling between 'normal' and 'vivid' -- with the latter really popping colours out.

There's no room for Android shortcut buttons beneath the screen. Having the buttons in the screen is hardly a novelty, of course. In this case, a quick sweep up from the slim bezel onto the display causes them to occupy a narrow strip. They're difficult to use one-handed, though: the sheer size of this handset, along with its slippery backplate, meant I was always wary of dropping it when accessing the buttons. Consequently, this is a two-handed operation for me.

Huawei has a stab at fixing this by letting users place a 'floating dock' anywhere they like on-screen. This is effectively a large white spot that can be parked at the most convenient location for thumb access, and which can be used to navigate through apps or get quickly back to the home screen. I found this quite comfortable to work with.

The SIM caddy on the left edge of the chassis will accommodate two 4G SIMs -- a world first, according to Huawei. There's no MicroSD card slot on the Mate 10 Pro (although the Mate 10 does have one, as an option in the second SIM slot), but you get 128GB of internal storage. Out of the box my review handset reported 108GB free. A year ago I might have said this is enough storage for anybody, but these days I'm not so sure. And with 128GB MicroSD cards available for as little as £50, boosting handset memory significantly is not a huge expense. So, on balance, I'd prefer to see a card slot here.

The Kirin 970 processor is backed up by 6GB of RAM. Huawei is hailing the its new SoC as the first AI processor for smartphones, complete with a Neural Network Processing Unit (NPU) and there are features throughout the phone that use its capabilities, from the battery to the cameras. Huawei even says the AI in the CPU can help improve call quality by boosting low volume calls and invoking ambient noise cancellation when calls are made in loud environments.

Meanwhile, with Microsoft Translator preinstalled, the handset can perform instant translation in more than 50 languages by bringing the NPU into play. I had success with some foreign language websites, so this bodes well for future use.

Huawei says that the Mate 10 Pro is ready for upcoming AI-based apps that will be more responsive and intuitive. Time will tell how developers respond.

Performance and battery life also get a helping hand from the NPU. The handset can learn your favourite apps and automatically allocate more system resources to them. There's no suggested life for the 4,000mAh battery, but my anecdotal evidence thus far suggests it should easily last through a working day -- it hasn't failed me thus far on that front, and might even go for two days. The provided cable supports Huawei SuperCharge, and half an hour's charging can deliver almost 60 percent battery charge.

The camera benefits from AI too. The main rear camera system comprises Leica-branded 20-megapixel monochrome and 12-megapixel RGB sensors, both with f/1.6 lenses. The front camera is an 8MP f/2.0 unit.

The rear cameras can identify some objects, and make automated adjustments to setting for better-quality shots. This 'scenario identification' worked well, spotting food, text, plants and my cat with ease. If you don't like what the AI does, a sweep up from the 'shoot' button invokes Pro mode, where manual settings can be made. There are plenty of shooting modes accessible by sweeping left.

The Huawei Mate 10 Pro runs on Android 8 (Oreo) with a new Huawei overlay -- EMUI 8.0. The previous iteration of EMUI was version 5, but Huawei perhaps feels it carries more clout to tally with Android's versioning.

There is a lot going on with EMUI, some of which I've already mentioned, and anyone looking for a vanilla or near-vanilla approach to Android should look elsewhere. As well as masses of themes there are plenty of usability tweaks. For example, you can sweep left or right along the button bar when it's visible to shrink the screen either to the left or right to make one-handed use easier, and similarly shift the keyboard left or right to help reach across it one-handed.

Huawei's PrivateSpace may also appeal. This is a separately passworded section of storage where you can keep 'secret' files behind a second security wall. Finally, with a USB-C-to-HDMI adapter, you can plug the Mate 10 Pro into a monitor and get a desktop-like experience -- either by also attaching a keyboard and mouse, or by navigating the EMUI Desktop using the phone's screen as a touchpad. Samsung offers similar functionality with its Galaxy S8, but requires you to buy the optional DeX dock.

I mentioned at the outset that there are three versions of the Huawei Mate 10. This review looks at the 6-inch Mate 10 Pro, but there's also the 5.9-inch Mate 10 and a 'luxury' Porsche Design model. Here are some key points of difference:

Huawei's flagship Mate 10 Pro is bursting with features. A great screen, very good battery life and widespread use of AI make it a pleasure to use, while IP67 protection is welcome. It's not without drawbacks though. Internal storage capacity of 128GB sounds like plenty, but I'd still appreciate a MicroSD slot. The slippery glass backplate reduces confidence in one-handed operation, and the lack of a dedicated headset jack will irritate some, even though Huawei provides a USB-C headset and an adapter.