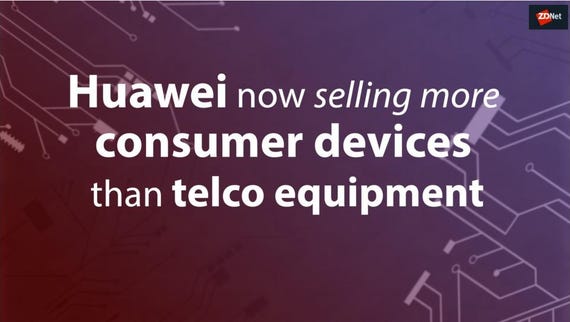 Broken down by division, the company's consumer business is now contributing the most in sales, growing 45 percent during the year to 349 billion yuan, while the sale of equipment to telcos was down 1.3 percent to 294 billion yuan. Huawei enterprise services contributed 10 percent of the company's revenue in 2018, posting 74 billion yuan, an increase of 24 percent year-on-year.

By region, China made up 52 percent of sales, contributing 372 billion yuan, an increase of 20 percent on 2017; the fastest growing region was EMEA, which saw a 24 percent jump in sales to 204 billion yuan; not far behind was the Americas, however it represents the company's smallest sales region, growing only 21 percent to 48 billion yuan; while the remainder of the Asia Pacific excluding China saw sales increase 15 percent to 82 billion yuan.

Huawei said it allocated 14 percent of its revenue to research and development and boasted about the 5,400 patent applications to the World Intellectual Property Organization during the year, making it globally the company with the most filings. As of December 2018, Huawei had 87,800 patents granted to it, with 11,150 of those patents being registered in the US.

The company has long claimed that it had an advantage in its 5G technology thanks to being able to integrate 5G base station with microwave.

"Through heavy, consistent investment in 5G innovation, alongside large-scale commercial deployment, Huawei is committed to building the world's best network connections, rotating chair Guo Ping said in the annual report. "Throughout this process, Huawei will continue to strictly comply with all relevant standards to build secure, trustworthy, and high-quality products."

Yet during 2018, Huawei found itself on the wrong side of decisions by the US, Australia, and New Zealand to ban or limit the extent that Huawei carrier equipment could be used.

On Thursday, Huawei suffered a security-related setback when the board overseeing the use of its equipment in the United Kingdom said there were new risks in using Huawei equipment.

"Overall, the Oversight Board can only provide limited assurance that all risks to UK national security from Huawei's involvement in the UK's critical networks can be sufficiently mitigated long-term," the board said.

It also added that no progress had been made on the faults reported last year.

In Huawei's annual report, Guo reiterated that security and user privacy were the "absolute top" of the company's agenda.

Earlier this month, the Chinese giant announced that it was suing the United States government to overturn a ban on federal government entities in the country doing business with it.

"The US government has long branded Huawei a threat. It has hacked our servers and stolen our emails and source code," Guo Ping said at the time. "Despite this, the US government has never provided any evidence supporting their accusations that Huawei poses a cybersecurity threat.

Explaining Australia's ban on Huawei, former Australian Prime Minister Malcolm Turnbull said the ban instituted in August was not done at the behest of another nation or for protectionist reasons, but because it defended Australia's sovereignty and as a "hedge against changing times".

"It is important to remember that a threat is the combination of capability and intent," Turnbull said earlier this month.