Australian telco says the lack of a clear upgrade path to 5G will see it end its network rollout.
Written by Chris Duckett on Jan. 28, 2019 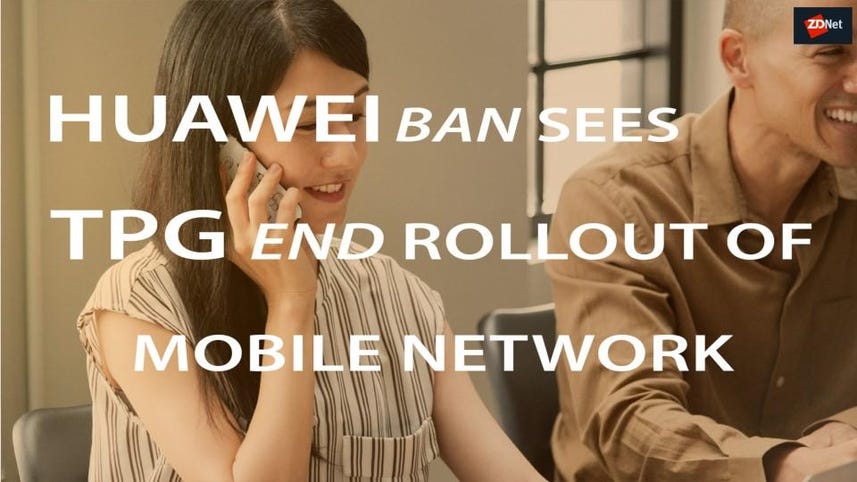 TPG has said it will end its mobile network rollout as a consequence of the Australian government's ban on Huawei 5G equipment.

Handed down in August, Canberra officially locked out Huawei and ZTE, saying that the vendors were likely to be subject to extrajudicial directions from Beijing, and that the government could not find a set of security controls that would mitigate high-risk equipment in a 5G scenario.

The Australian telco told the ASX on Tuesday that it had purchased equipment for 1,500 sites, as well as 900 fully or partially completed small cell sites. The company has already racked up AU$100 million in costs, with a further AU$30 million to come.

"It is extremely disappointing that the clear strategy the company had to become a mobile network operator at the forefront of 5G has been undone by factors outside of TPG's control," Executive Chairman David Teoh said.

"Over the past two years a huge amount of time and resource [sic] has been invested in creating and delivering on a strategy that would have positioned TPG very favourably to exploit the opportunities that the advent of 5G will present."

The company said it had yet to decide what to do with the 5G spectrum it picked up last month for AU$263 million with its partner Vodafone.

TPG and Vodafone are in the midst of a merger that would create a AU$15 billion entity.

Last week, the Australian Competition and Consumer Commission delayed its decision on the merger due to a lack of information from the parties.

Teoh said on Monday that TPG remained committed to the merger.

"As predicted the Australian's government's 5G ban on Huawei will lead to reduced competition and higher prices for Australia consumers and businesses. It is not just higher prices, Australians will miss out on the competition that drives technology innovation," he said.

"Huawei, Australia's largest provider of wireless technology, has a 15 year track record in this country of delivering safe and secure technology and has always offered and been open to independent security auditing and testing."

At the same time TPG made its announcement, the United States unsealed charges against Huawei and its CFO Meng Wanzhou.

The charges relate to conspiracy, fraud, obstruction of justice, and intellectual property theft.

ACCC delays TPG-Vodafone decision due to lack of information

Decision timeline is suspended until the ACCC gets the information it needs.

ACCC has concerns over TPG-Vodafone merger

The TPG-Vodafone Australia merger decision has yet to be made, with Australia's consumer watchdog saying it has concerns about competition that need to be addressed.

TPG looks to have avoided a second strike and the threat of a board spill after 94 percent of proxy votes were cast in favour of its remuneration report.

The ACCC has alleged that TPG misled customers over a AU$20 prepayment term in its contracts, estimating that TPG likely retained millions of dollars in forfeited prepayments.

The ACCC has said TPG is delivering the highest percentage of maximum download and upload speeds to its NBN customers, with Telstra retaining the lowest latency, while MyRepublic came last across most categories.