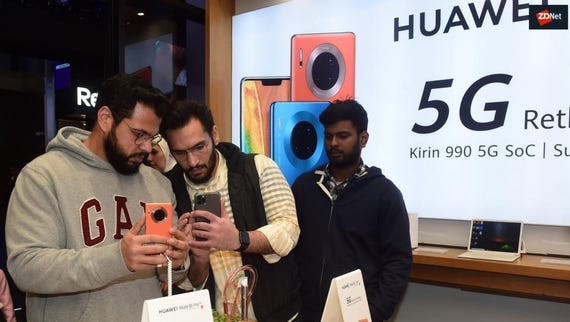 Despite the ban, Huawei was the top 5G smartphone vendor in 2019
Watch Now

Huawei announced on Thursday that it is set to spend more than €200 million on purchasing land and establishing a new factory in France.

The Chinese telecommunications equipment giant said the facility would provide 500 jobs and create €1 billion worth of products annually, mainly for European markets. The plant will specialise in 4G and 5G equipment, it said.

"As one of the world's most advanced manufacturing centres, France has mature industrial infrastructure and a highly educated labour pool, and its geographic positioning is ideal for Huawei," the company said.

"This manufacturing plant will add to Huawei's integrated value chain within Europe, improving the timeliness and reliability of Huawei's deliveries to European customers."

None of the devices are available in the United States, and the phone and tablet are without any Google Android services. Huawei and Google can only work together to support Huawei devices that were available to the public on or before 16 May 2019.

Last month, the United Kingdom decided to allow a limited amount of Huawei equipment in the nation's 5G network rollouts.

The UK said Huawei would not be allowed to be involved in the core of the network, and there would be a 35% cap on the use of equipment from what it terms as "high-risk vendors" in other areas.

Following that decision, there was talk of Australia reversing the 5G ban it slapped on Huawei in 2018, but that was quickly dismissed by Australia's Home Affairs Minister Peter Dutton.

Dutton said it was not in the best interests of Australia to have its telco networks compromised and responded to a question about revisiting the ban with a simple: "No, we're not".

Google warns users of new Huawei devices not to try sideloading its apps, which are simply not available to them.

The Chinese telecommunications company aggressively pitches the suitability of its 5G portfolio for European markets.

'Contracting with the federal government is a privilege, not a constitutionally guaranteed right,' according to a US District Court judge.

US charges Huawei with racketeering and conspiracy to steal trade secrets

US updates charges against Huawei, adds racketeering and IP theft allegations against the Chinese telco provider and its CFO.