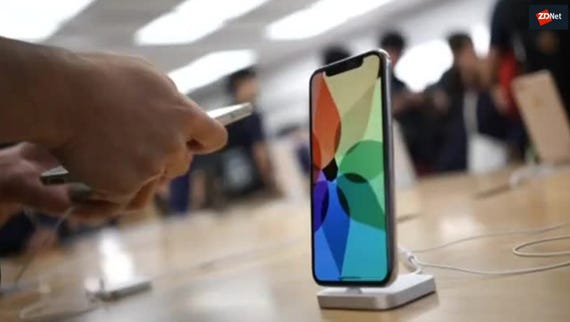 I was happy to give Apple big bucks in exchange for hardware that suited my needs and gave me a few years of trouble-free service.

Those days seem to be long gone. I've already had the hassle of having to replace the battery in a device that was only two years old, and the battery in my new iPhone 8 Plus is being battered at a rate that's far faster than any previous iPhone I've owned.

Digital ecosystems are strange things in that you don't really start to feel the boundaries until you're already closed in, and by then it's usually too late -- or at least close to being too late -- to do much about it.

Must read: GrayKey promises to crack iPhone passcodes for police

That's how I feel about the iPhone ecosystem (and, by extension, Apple as a whole). After years of enjoying being in the Apple ecosystem, I now feel trapped by it, and feel that the only reason I'm staying in it is because I'm being held hostage.

But I am planning my escape.

I probably need to explain the hostage thing a bit more. No, Tim Cook isn't over at the PC Doc HQ holding a lime green water pistol emoji to my head. But he is menacingly waving that cheery-looking squirt gun at my data and communications.

I have a lot of data in the Apple ecosystem. Some of it I can get out and into other services and apps, but there's a lot that I can't. Health and fitness data is one such example. I mean, I could live without it -- thankfully -- but it would be a shame to lose it. If I had some sort of medical condition that I was keeping an eye on using the Health platform, then I might not be able to afford to be so blasé about its loss.

Be careful what data you choose to store in a walled garden.

Another sticking point is iMessage. By jumping into Apple's ecosystem, and then further encouraging others to do the same, I've trapped myself. While I've avoided iMessage for business (I'm mostly an email guy, partly because of time zone issues, and partly because it's much easier to ignore and delete), most of my personal communications go over iMessage.

And there's no way to get iMessage onto other platforms (well, not natively, there is a way to get it to work with Android, but you need a Mac handy). Not precisely a checkmate -- I could switch to text messaging -- but it's a pressure point for sure. Transitioning to any other platform would be painful, and I should probably start this sooner rather than later.

One thing that isn't a pressure point for me is apps. Almost all the apps I use have Android counterparts, and I wouldn't mind repurchasing them. In fact, I'm pretty sure it would be refreshing to lay waste to all the old crud (although I'd probably accumulate new crud in no time).

Another is my Apple Watch. Yeah, I like it, and it sure is a neat fitness device, but I could live without it for sure.

As for Siri, yeah, whatever. Goodbye. I already find Alexa much better suited to my needs, especially when it comes to home automation.

And the iOS experience seems to be getting worse instead of better.

There's also the price to consider. I like my iPhone a lot, but the cost spread over a three-year lifespan is close to a dollar a day. Now that iPhones seem to be causing grief sooner than that, it's getting harder to justify the cost.

And as much as the cool new stuff such as Face ID and AR excite me from a technical standpoint, to be honest, what I want more than anything is a reliable tool that allows me to talk, text, access the web, and send and receive emails.

I'm also auditing the sort of information that I store in the Apple ecosystem, along with what apps I use on a regular basis. This not only gives me an idea of what I might need to migrate (or lose), but it also allows me to start looking at app availability on the Android platform.

Just to be clear here, one thing that I am not doing is some sort of knee-jerk, slash-and-burn reactionary jump from iOS to Android. I know that some people recklessly encourage others to switch platforms at the drop of a hat. I'm not one of those people. Switching platforms isn't something you want to do without giving it a lot of thought, and carelessness or bravado can lead the foolish into a world of hurt.

I don't hate my captor that much!

Join Discussion for: I'm held hostage by my iPhone, but I'm planning...