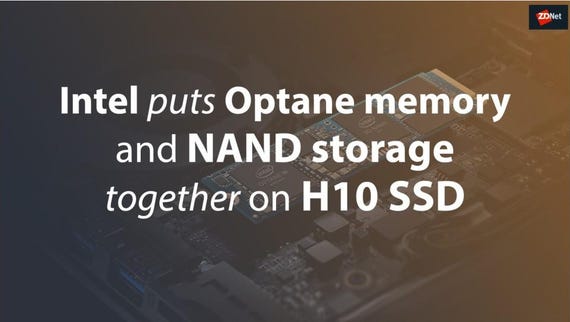 Intel has announced a new member of its Optane series, the H10, which adds some of the company's 3D NAND storage beside its Optane 3D XPoint memory on a single M.2 drive.

Initially, the H10 will be offered in three combinations: A 16GB Optane chip with 256GB storage; 32GB of 3D XPoint and 512GB of storage; and 32GB of Optane with 1TB of storage.

Aimed at the light and thin laptop market, Intel said it expects the largest two combinations to have the highest volume, and will target them at laptops over the $1,000 mark.

The H10 will initially be available in 8th-generation Core U-based laptops in the United States through Best Buy in May, produced by the likes of Dell, HPI, and Asus.

No pricing details were provided by Intel.

Thanks to the use of Optane as a hot cache, the chip giant claims the H10 is able to boost the opening of documents by 2 times, launch games 60% faster, and open large media files 90% faster when compared to other SSDs, but only when a machine is multitasking.

Intel to exit joint venture with Micron at a time of its choosing in the next six to twelve months.

Redis Enterprise is now available on the hardware preview of Intel's Optane non-volatile DIMMs, which can be configured at up to 512GB per module.

The new memory solution leverages 3D XPoint and offers DIMMs in sizes up to 512GB.