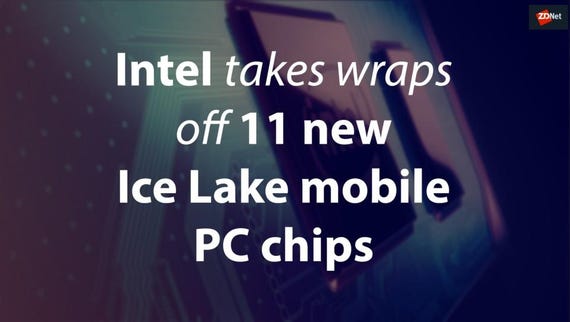 Intel has released 11 new Ice Lake processors aimed at laptops and 2-in-1 devices, following the unveiling of its 10th generation, 10nm process in May.

In the U-series, Intel is releasing a pair of i7s, i5s, and i3s. The beefiest of which is a 4-core i7 with a 2.3GHz base frequency capable of 4.1GHz turbo mode that sucks down 28 watts. The rest of the U-series runs between 1.3GHz and 1GHz with turbo frequencies sitting around 3.4GHz that use 15W/25W of power.

With the introduction of these chips, Intel is moving to a new naming structure, with chip names ranging from Intel Core i7-1068G7 for the fastest U-series to Intel Core i3-1000G1 for the slowest Y-series chip, with names like Core i5-1035G4 for the U-series and Core i5-1030G4 for the Y-series in between. So no less confusing than usual.

Intel said the chips are capable of 2.5 times better performance on AI with its deep learning boost technology, as well as being able to run games in 1080p resolution twice as fast.

Chips with 48 and 64 execution units now fall under the Intel Iris Plus Graphics label with the maximum frequency of those units running between 1.1GHz to 0.9GHz, and capable of up to a teraflop of computing power. Intel said Iris Plus uses variable rate shading and VESA's adaptive sync display standard.

Wi-Fi 6 is integrated throughout the entire range of CPUs.

For its second quarter earnings released earlier this week, Intel posted revenue of $16.5 billion, down 3% compared to the same time last year.

Cupertino will gain 2,200 engineers from Intel as well as a collection of patents related to wireless technologies, cellular standards, and modems.

"Intel will retain the option to develop modems for non-smartphone applications, such as PCs, Internet of Things devices and autonomous vehicles," Apple said at the time.

Intel has also raised its yearly outlook based on better-than-expected second-quarter results.

If you can't update to Windows 10 1903, it might be because of an outdated Intel RST driver.

The deal is expected to close in the fourth quarter of 2019, as long as regulators agree.

10nm Intel CPUs not coming to desktops until at least 2022, amid manufacturing issues (TechRepublic)

Intel is struggling to deliver 10nm CPUs, while AMD will announce 7nm Zen 2 CPUs at Computex 2019.