LG to develop robots for restaurants

LG will help develop robots that will be trialled at CJ Foodville restaurants later this year.
Written by Cho Mu-Hyun, Contributor on April 17, 2019 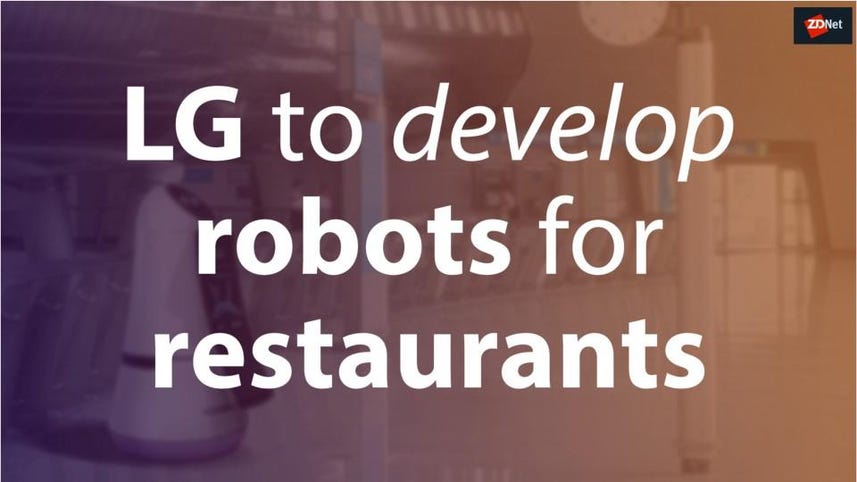 LG Electronics has partnered up with CJ Foodville to develop robots that will be trialled in the latter's restaurants, the companies have announced.

CJ Foodville is one of South Korea's largest food service companies, and is the parent company to popular franchises such as Twosome Place and Tous Les Jours. The coffee chain Twosome Place currently has over 1,000 stores located in South Korea.

No specifics regarding the robots' functions have been provided by the companies as of yet.

The push into the robotics space follows LG forming a new division for robotics and autonomous vehicles, which occurred during the company's 2018 year-end reshuffle. The new division is under the direct supervision of LG's CEO .

The company also announced at the year-end reshuffle that it was developing a smart cart with local supermarket chain E-Mart. The smart cart reportedly follows customers around the store without needing to be pushed by the customers.

It has already commercialised its Hub Robot series, unveiled at CES in 2017, which is being used extensively in Incheon International Airport to help guide guests.

It was also among the investors of Nova Robotics, which makes shelf-scanning robots Walmart.

LG has not been alone in tossing its hat into the robotics ring, with its rival Samsung unveiling in February a robotic arm that assists with cooking in the kitchen.

An LG OLED TV, sold at a US retailer, has shown signs of burn-in despite likely being on the shelf for only a year and a half.

Handset will go on sale April 19 in South Korea, and will have new customised AI services that alert users about expiring coupons and improved search capabilities.

LG Electronics and E-Mart will co-develop a smart cart for use in South Korean supermarkets that will follow customers around instead of being pushed.

The global mobile robotics market is expected to hit $30.96 billion by the end of 2025, up from $8.58 billion in 2016, according to a report from Transparency Market Research.

Video Conferencing
Complete the MSCHF puzzle for a chance to win $1,000,000