Of course the real Black Friday deal about Linux is that you can get it for free every day of the year. But, if you'd rather have something tangible to put into someone's hands, here are some nice deals.

If you want a no-compromise Linux laptop, System76 is offering its 17.3" display Bonobo Extreme for a new price of $1,549. Yes, that's a lot of money a laptop, but you get a lot of laptop for the money.

The top-of-the-line Bonobo comes with an nVidia GTX 765M GPU or the nVidia GeForce GTX 780M with 4 GB GDDR5 memory and 1,536 cores of graphics processing power. Its main processor, a 4th Generation Intel Core i7-4700MQ CPU is also outstanding. With a base configuration of 8GBs of RAM which you can push up to 32GBs, and a TeraByte SATA II hard drive, the Bonobo Extreme has everything a true Linux power user could want this holiday season. The Bonobo runs Ubuntu 13.10 , which is a great desktop Linux. 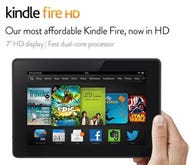 Black Friday isn't just for the usual electronic suspects. There are deals out there for Linux-based Chromebooks, Android tablets, and Linux laptops as well.

If that's too much for your wallet, System76 also offers the far more modestly priced Darter UltraThin for $899. This Ubuntu-powered system has a 14.1" display backed by Intel HD Graphics 4400. It uses an Intel i5-4200U as its CPU and comes with 4GBs of RAM. For storage it defaults to a 500GB SATA II drive.

The other major Linux desktop retailer, ZaReason, isn't offering any sale prices per se. Through November, though, it is offering free shipping. Its Alto 433, at a base price of $699, is a good low-end system. It comes with your choice of Linux operating systems including Debian, Fedora, Mint, and the full Ubuntu family.

The Alto 4335 with its 14" display starts with an Intel i3-3220M processor and Intel HD Graphics. It also has 4GBs of RAM and a 500GB hard-drive. It's not fancy, but with any of its Linux distributions under the hood, it has more than enough horsepower to do any job.

If you want a tablet, and who doesn't these days, my personal favorite is the 2013 Android-powered Nexus 7 . This 7" tablet, which is currently being upgraded over the air to Android 4.4 , is available at Black Friday prices from many retailers.

For example, Walmart is already offering the new Nexus 7 with 32GBs of memory for $229.99. That's not quite $40 off. Walmart is also offering the 2012 Nexus 7 with 32Gbs of memory for $189. True, it's not fast and the screen isn't as good, but it's still a great, low-cost small tablet. Best of all these deals are all available now and you don't have to go to the store to get them.

Personally, I like small tablets, but if you want something bigger with a real price cut, check out the Samsung Galaxy Tab 3 10.1 Wi-Fi Tablet. It's available from many retailers, such as Costco, Staples, and Walmart for $299, that's $100 off.

Saving money on gadgets without braving the Black Friday crowds: that's what Cyber Monday is all about. We're tracking the deals right here.

One thing you don't want to do is buy a really low-priced Android tablet. These no-name Android tablets can be had for as little as $50 . I'd avoid these. You get what you pay for. And, in this case, that's not much.

Chromebooks, the popular low-end laptop family , use the Chrome Web browser as an interface to a lightweight Linux distribution. These devices already start out, with the exception of the Chromebook Pixel , with very low prices. Still, this Black Friday there are even lower prices than usual for good Chromebook models.

Last, but not least, you can do well for Linux and penguins by getting an individual membership in the Linux Foundation . You'll benefit both Linux users everywhere and emperor penguins for $99.