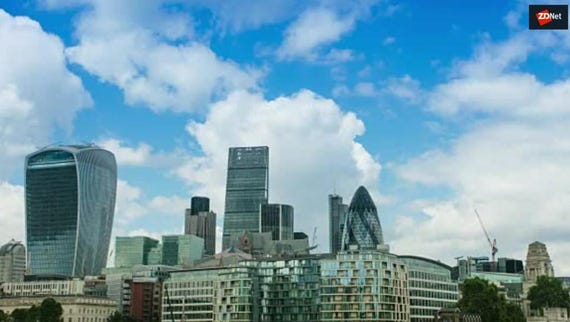 Working from an office perched high above the Old Street roundabout -- the one they used to call Silicon Roundabout in the far-off days of 2010 -- means I have a great view of the changing skyline of east London.

Mostly that means towers of steel and glass and concrete gradually hiding the Victorian redbricks, and gleaming shopfronts replacing the least Instagrammable graffiti. Writing about tech has given me a good vantage point from which to observe the capital's tech startup scene evolving along with the neighbourhood.

Back in 2014, I published one of the first pieces looking at the impact the still-emerging London tech scene was having on its home district.

Small tech businesses had congregated in this affordable area of east London, then filled with artists and small manufacturers, and slowly built out an ecosystem. It was a messy, chaotic and fun world of businesses that were trying to create some kind of group identity. It was also fascinating to watch the impact of these newcomers on a shabby, but very creative, area of the capital.

One of the things I got wrong back in 2014 was that I thought that the heritage of design and manufacturing in east London, which goes back hundreds of years, was going to make a bigger impact on the tech scene.

There was a lot of talk about how London startups would lean towards hardware, robotics and making. There's some of that, but not as much as I might have hoped: software has mostly dominated the London tech ecosystem.

I did identify financial tech as a big winner (despite the cheap rents in those days, London's financial district was right next door, so fintech customers were nearby), and that has indeed happened.

In the six years since I first started researching that piece, a lot has changed. There are still plenty of scrappy startups with big ideas, but there are also a lot of well-groomed scale-up businesses with customers and revenues, and even some of those unicorns with their billion-dollar valuations. The gentrification of Shoreditch continues; and while many will mourn the passing of old buildings, businesses and communities, it's a process that can also bring new, high-value jobs to an area that still needs them.

For the startups, some of the challenges have changed. Funding is easier to find for small companies, although still harder for bigger ones. There are countless startup hubs, co-working spaces and accelerators that will provide help and advice. Entrepreneurs who have made a successful exit with one business are back in the game looking to fund the next wave. London is an international hub for talent, one of the top destinations for developers anywhere in the world.

And yet, right now Brexit looms.

Some argue that the concern over Brexit is overblown – the other day I heard someone claim that the cost of London rent is a bigger risk to the tech scene than Brexit. It's a good line, but one I think underplays the level of threat to the system.

It's true that entrepreneurs thrive on uncertainty, because they want to see the opportunity missed by everyone else. But the level of structural uncertainty introduced by the ongoing Brexit process is undoubtedly hurting. When the future of laws and regulations are unclear -- including whether you are even allowed to remain in the country (remember, a third of London's tech staff are from beyond the UK) -- it's hard to build a sustainable business. While most speakers at the launch of London Tech Week politely avoided mentioning Brexit, perhaps because the Prime Minister was speaking at the end of the morning, it's hard to avoid the impact. Other European hubs are already growing fast, and London's lead is being eroded.

Politicians have long used the startup scene as a handy prop to show their support for business; outgoing Prime Minister Teresa May was at the opening of London Tech Week today (albeit right after a startup boss wearing a 'People's Vote' T-shirt) to voice her support. In reality, the tech scene has benefited most from being largely ignored by politicians.

Will London's tech ecosystem thrive in the next five years like it has in the last? That will very much depend on how the next Prime Minister handles the Brexit issue.

Join Discussion for: London’s tech startups are thriving, but...