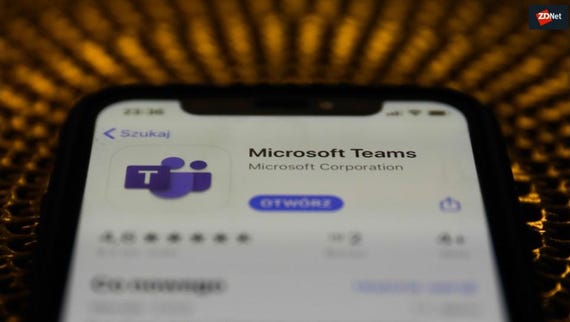 Microsoft Teams: The complete guide for business decision makers For organizations settled into Microsoft's family of apps and services, the obvious collaboration platform is Microsoft Teams.

Microsoft has released a Teams meetings update that builds on its popular blurry background effect and now allows users to upload their own custom backgrounds.

Microsoft already offers background blur effects and other pre-installed template backgrounds to use during meetings when participants want to conceal the reality of what's behind them during a meeting with colleagues or classmates.

It's one more feature that helps Microsoft catch up with capabilities already available to users of Zoom, which has seen massive growth since governments imposed social-distancing restrictions to prevent the spread of the coronavirus COVID-19.

Microsoft has posted a new support note with instructions for adding a custom background to a Teams meeting.

The toggle to enable background effects sits next to the toggle for the mic at the bottom of the screen in the Teams app.

"You can also replace your background with one of the images provided, or with one of your own choosing. To use an image of your own, choose 'Add new' and then select one to upload from your computer. Make sure it's a .JPG, .PNG, or .BMP file," Microsoft notes.

Since the pandemic, Microsoft has been racing to roll out new features aimed at keeping Office 365 users on Teams and not moving to Zoom.

It's boosted group chat in Teams from 100 to 250 participants, introduced Skype for consumer and Teams integration, improved broadcasting capabilities using Skype technology, and made it easier to install custom Power Apps-based business apps to Teams.

Microsoft earlier this month confirmed it is aiming to enable 49 on-screen participants in Teams video meetings, matching what's already available in Zoom. Some teachers have complained that the current nine-person on-screen limit is a pain for conducting remote lessons. Microsoft hasn't said when the capability will arrive.

And last week Microsoft started allowing users of the free version of Teams to set up a video meeting, which effectively makes Teams a standalone video meeting app as opposed to something tied to a Microsoft 365 subscription. Previously, free Teams users could only join a meeting set up from a paid Teams account.

The move takes another leaf from Zoom's strategy, which has seen an explosion in free participants during the pandemic. Zoom hopes to convert these free users to paid customers in the future.

Microsoft's daily active Teams user numbers have grown from 44 million to 75 million since March, but Zoom has seen its daily participants explode from 10 million in December to 200 million in March and rise again to 300 million in April.

Join Discussion for: Microsoft Teams: Now you can all add your...