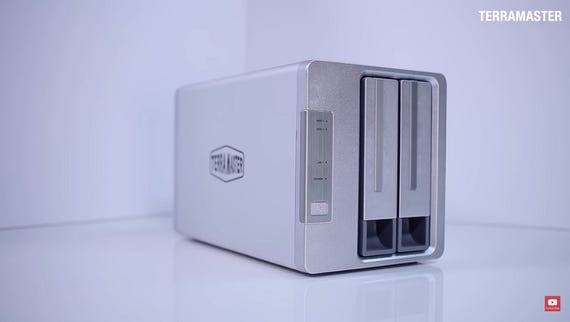 Over the past few months, I took a hard look at the performance of RAID devices for both performance and functionality. Today, we'll be looking at the fifth of seven NAS products to see how it performs.

I've subjected each candidate machine to a series of torture tests. Beyond that, I look at performance, apps, user interface, and so much more. Today, we're testing the TerraMaster NAS F2-420.

TerraMaster is a brand I hadn't worked with before, so I didn't have any real expectations going into my testing process. I was pleasantly surprised. Setup was quick and relatively painless. This is the only two-bay NAS in our test series. It uses trays and tiny little screws to attach the drives.

The little TerraMaster successfully detected the bad drive and made a beeping sound to indicate failure, passing Test 1, drive failure discovery. It did not physically indicate which drive failed, but the NAS's web interface made it clear. After popping out the bad drive and inserting a new, mismatched one, I did have to go into the TOS software to perform a rebuild, which it did easily. Test 2, recovery to mismatched drive, also passed.

There were two RAID performance failings on this small machine that brought down its score. The TerraMaster did not offer a way to reallocate storage on the RAID to accommodate the increased drive sizes for our grow over time test.

Resizing the RAID array's capacity was simply not available. Email notification was only through SMTP gateway, so that didn't work through my cable provider. That gave the TerraMaster a RAID performance score of three out of five.

The TOS desktop UI is nice. I'd put it on par with that of the very well rated QNAP. It faithfully copied both Mac and PC files without a glitch. Plus, this small machine also got points for having a network recycle bin.

It lost a point for having a power brick instead of a PC plug. It lost more points because of the low selection of applications. At $150 per bay, it's right in the middle of the price-per-bay scale across all seven NAS offerings. But the biggest point loss came because its aggregate read/write performance was the slowest of our test candidates.

All told, the TerraMaster NAS F2-420 earned only three out of five usability and performance stars.

Because it got a three in our RAID test due to the inability to scale over time, and it also got a three in the performance and usability tests due to performance issues and low app count, the TerraMaster NAS F2-420 comes out of our contest with an overall three out of five star rating.

It's a surprisingly nice machine with some limitations, but it's not best-in-show. For the best of the best, you'll have to wait until we discuss our next two machines. That'll be in our next two articles.

Join Discussion for: NAS Wars 2017: We test the TerraMaster NAS...