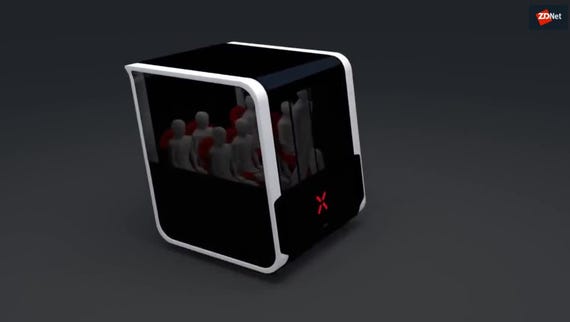 Video: These driverless pod vehicles are set to begin testing in Dubai

E-commerce has yet to flourish in the Middle East, but the acquisition of the Dubai-based online retailer Souq.com by Amazon earlier this year, and the launch of Noon, a new portal for consumers in UAE and shortly in Saudi Arabia, have refocused attention on its potential.

So how big's the region's e-commerce market?

According to the Arab Federation for e-Commerce, the industry is worth $20bn a year. But the group, which is based in Cairo and supported by 14 regional governments, is confident that figure will grow to $200bn within the next five years.

Despite high levels of digital penetration, the region's e-commerce sector is lagging behind other markets. "E-commerce accounts for only around 0.71 percent of the region's total GDP at present, compared with three percent for the rest of the world and as much as five percent in some countries such as the US," noted Arabian Business.

Why hasn't e-commerce taken off in the Middle East?

There are myriad infrastructural and cultural reasons for the slow adoption. Historically, much of the region has had no postal codes, and no home postal service, making delivery difficult.

Companies like Fetchr have responded to this challenge by having consumers use the GPS on their mobile phone to act as a homing beacon for their couriers. The startup recently formed a joint venture, called ERSAL, with the Oman National Post Company, aimed at improving delivery services in the Sultanate.

Alongside this logistical challenge, many businesses, especially smaller firms, have little or no online presence, with no immediate intention of remedying this situation. Also, not only do "more than 85 million adults in the region remain unbanked," according to 2015 figures from the World Bank, many of the region's consumers are unable to shop online, even if they wanted to.

Logistics aside, other cultural considerations such as privacy concerns and a preference for cash on delivery, rather than online payment platforms, have also hindered growth and made it difficult to capture the full the size of this market.

"Cash on delivery is expensive for retailers because they must bear the risk upfront, which can negatively affect cash flow," explained management consulting firm AT Kearney in a 2016 White Paper, "in addition to the risks that come with carrying cash".

One online entrepreneur, Hamza el Bayed, co-founder of the Saudi Arabia e-commerce company Ora La Moda, which sells fashion apparel, estimates that about 80 percent of his sales are cash on delivery. This experience is by no means unique.

Are there any other barriers to growth?

Yes. Cashflow and scale are also important considerations for many businesses.

One of the most popular couriers in the region is the local delivery agent Aramex. As Hamza el Bayed recently explained, it's the shipping company which typically collects payment. "They take a small fee, and then, at the end of the month, they wire-transfer the remaining amount to us." Smaller companies, especially those without a large credit line, may find this financial model problematic.

Year of upheaval: These are the trends shaping Middle East tech Aside from headline-grabbing Hyperloop plans and government crackdowns on communications tech, what are the shifts that will really change the region?

Speed of delivery, or lack thereof, and the cost of online products can also be a hindrance.

According to AT Kearney's analysis, "Most retailers have inadequate warehouse coverage across the region for the rapid delivery of products of less than 24 hours that more customers are demanding." Moreover, "Fewer than half of the top retailers offering e-commerce have a regional distribution center, which results in more imports and higher airfreight costs."

Pierre de Mascarel, who co-leads the Middle East and North Africa digital practice at Oliver Wyman, a consulting firm, believes this could change. "The industry simply needs to reach scale," he said earlier this year. "Great bargains in the USA and China for example are a function of Amazon's capacity for more than 500 transactions per second and Ali Baba's more than 12 billion transactions per year."

This volume and scale, typically lacking in the region, enables online players to negotiate hard and achieve economies of scale in terms of both distribution and product acquisition.

Does the region have some success stories?

Yes, absolutely. Souq.com employs more than 3,000 employees in UAE, Egypt, Saudi Arabia, Jordan and India. According to the company, the site "attracts more than 41 million visits to its catalog of more than 8.5 million unique products in 35 different categories" every month.

Other sites to note include the fashion portal Namshi, food services like UberEATS and Make My Meal, home interiors provider Wysada.com, mother and baby store Mumzworld, and BuyLebanese.com sells coffee, nuts, baklava, arabic sweets and other items to more than 125 countries worldwide.

Alongside these larger businesses, the Gulf region is home to multiple vendors, often women acting independently, who sell fashion items, food and other goods via Instagram or WhatsApp, while in North Africa, The Anou allows Moroccan-based artisans to sell their products online.

These different enterprises give an indication of the increasing vibrancy of the region's e-commerce landscape.

Why is there optimism about Middle East's e-commerce future?

As Mathew Reed, Ovum practice leader Middle East and Africa, told ZDNet earlier this year, "Some serious money is finally being put into e-commerce in the region." This funding isn't just coming from the region, but also from investors around the world.

Fetchr, a Middle East shipment and delivery company, profiled by ZDNet in 2015, announced $41m in Series B financing earlier this year. Online portal Wadi.com, part of a joint venture of Rocket Internet and South African telecoms giant MTN, secured US$67m in series A funding in 2016, and Souq.com, which itself was bought by Amazon this year for $580m, recently acquired Wing.ae, a startup focused on same- and next-day delivery.

Alongside these investments, traditional retailers such as Carrefour are increasingly going online, and government bodies such as the Saudi Arabian Monetary Agency (SAMA) are seeking toimprove the environment for online payments, while research from Mastercard suggests that MEA consumers are among the most enthusiastic about the potential of using mobile, SMS and other non-traditional payment systems.

Although not without its challenges, these building blocks, coupled with high mobile and smartphone penetration, a young digitally savvy population, and the purchasing power enjoyed by many Gulf citizens, provide a solid foundation from which the region's e-commerce sector can potentially flourish.

Its e-commerce industry may still be in its infancy, but with investors, banks, retailers and regulators, all actively looking to improve the consumer experience , and offer more choice for online shoppers and retailers, the region's fledgling e-commerce sector may soon be really up and running.

While it's still early days for e-commerce in the Middle East, it is considered a region with significant potential by online retailers.

New research shows the shifts in mobile, the internet, and social media in the Middle East and North Africa.

This hiring kit includes a job description, sample interview questions, and a basic want ad to help you find the best candidates to fill the ecommerce tech analyst position.

Join Discussion for: No ZIP codes, cash on delivery: So can Middle...