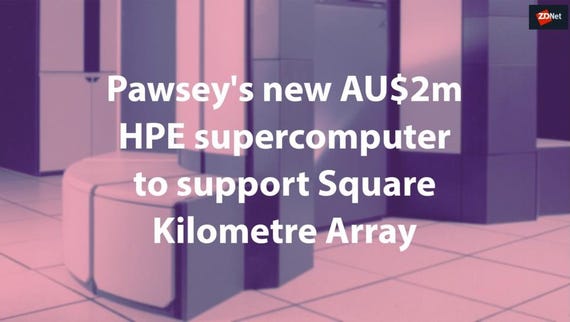 The Pawsey Supercomputing Centre has announced a new addition to its Perth, Western Australia facility, which will be used to support one of the Square Kilometre Array (SKA) precursor projects.

For a cost of AU$2 million, HPE will deliver the new 78-node cluster, which is expected to provide a dedicated system for astronomers to process in excess of 30 petabytes of data from the Murchison Widefield Array (MWA) radio telescope.

Pawsey in April 2018 announced receiving AU$70 million in funding from the federal government to upgrade its facilities. The funding will be used for the new system.

The $1 billion SKA is slated as the largest and most capable radio telescope ever constructed.

The MWA and another SKA precursor telescope, the Australian Square Kilometre Array Pathfinder (ASKAP), are located at the Murchison Radio-astronomy Observatory in remote Western Australia, which is owned and operated by the Commonwealth Scientific and Industrial Research Organisation (CSIRO).

Processing of the data collected by both the MWA and ASKAP telescopes has been performed on Pawsey's real-time supercomputing system dedicated to radio astronomy, Galaxy.

However, Pawsey said the data processing needs of both instruments have been growing, with the MWA having doubled the number of antennas available, and ASKAP soon to be ready to undertake full surveys of the sky.

The Pawsey Supercomputing Centre's 546 TeraFlops MWA cluster will comprise of 78 nodes, each with two Intel Xeon Gold 6230 processors operating at 2.1 GHz and providing 40 compute cores in total, a single Nvidia V100 with 32 GB of high-bandwidth memory, 960 GB of local NVMe storage, and 384 GB of main memory.

Pawsey currently hosts two supercomputers: The Cray XC30Galaxy and Magnus, a Cray XC40 supercomputer which uses a massively parallel architecture consisting of 1,488 individual nodes that are connected by a high-speed network.

Magnus was commissioned in 2014 and the Galaxy in 2013. CSIRO is currently consolidating the two systems.

The Pawsey centre is an unincorporated joint venture between CSIRO, Curtin University, Edith Cowan University, Murdoch University, and the University of Western Australia.

It currently serves over 1,500 researchers across Australia that are involved in more than 150 supercomputing projects. Nine Australian Research Centres of Excellence also benefit from the Pawsey centre.

In addition to Magnus and Galaxy, the Pawsey Supercomputing Centre also houses Athena, which was provided by HPE-owned SGI in March 2017.

Commissioning of the new MWA cluster system is expected to be finalised by Q2 2020.