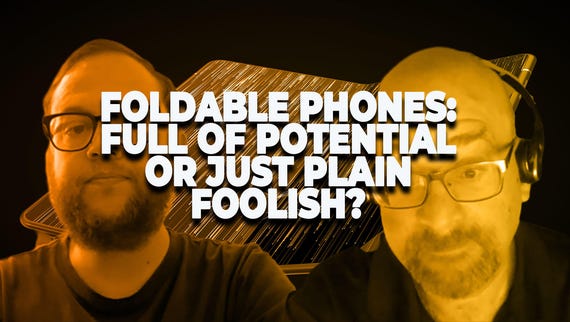 Motorola may be finally ready to reveal the revived Razr it hinted at in January, announcing an event on November 13 with an invite that says, "You're gonna flip".

Given the persistent rumors over the past year about a foldable Razr flip phone, Motorola isn't being coy about what it will reveal even though Razr isn't specifically mentioned in the invite.

As per ZDNet sister site CNET, Motorola's invite contains a gif showing a device being folded and unfolded as if the two sides are peeling back to reveal the classic Razr inside.

The invite also states "an original unlike any other" and that "you're gonna flip".

The event will be held in downtown Los Angeles, where Motorola is promising to reveal a "highly anticipated unveiling of a reinvented icon".

In January rumors surfaced that Motorola was working on a foldable Razr that might retain the classic flip action the original Razr was known for. Reports at the time suggested the device could cost $1,500.

Motorola designers told CNET last year that they were exploring ways to revive the sound of the classic Razr opening and its feel without being gimmicky.

Unlike Samsung's Galaxy Fold, which unfolds to become a 7.3-inch tablet, the new Razr will fold vertically, just like the classic flip phone.

The new Razr is rumored to run on a Qualcomm Snapdragon 710 processor. It is said to be available in white, black and gold. It may also have a 2,730mAh battery, 4GB or 6GB of RAM and 64GM or 128GB of storage.

Motorola, which is owned by Lenovo these days, was aiming to launch its first foldable this summer. But as CNET reported in September, the date was pushed back to the end of 2019.

According to the Wall Street Journal, the new Razr is being made in partnership with Verizon, and Motorola at the time was only planning to produce 200,000 units.

More on Motorola's Razr and flip and foldable phones