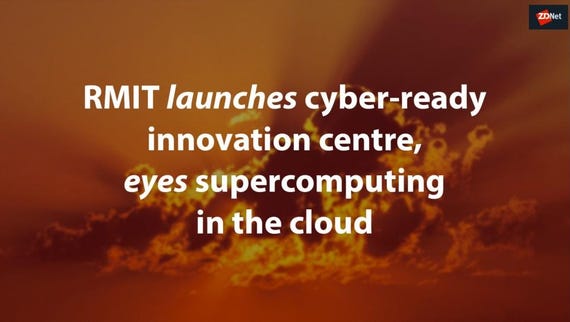 The Royal Melbourne Institute of Technology (RMIT) on Thursday announced the launch of a Cyber Ready Cloud Innovation Centre (CIC) that the university's president and vice chancellor Martin Bean said would focus on developing creative solutions and building digital capability.

The CICs are dedicated to accelerating public sector innovation and are powered by Amazon Web Services (AWS).

RMIT's CIC will focus on cybersecurity.

Speaking with ZDNet during AWS re:Invent in Las Vegas, Bean said the local iteration of the CIC would enable students to tackle cyber issues in the real world through innovative cloud computing approaches and emerging technology.

See also: Why the university of the future will have no classrooms, no lectures, and lots of tech (TechRepublic)

"It's nested in a suite of things that we're doing … clearly, we can all see that in the tapestry of technology now, cloud is becoming more and more important and that's not just at an enterprise level, that's at an individual level," he said.

"The other thing that cloud allows us to do is to be able to scale real world scenarios for our students by leveraging the capacity and the computing capability.

"You can imagine a world where using gaming to help people of all ages to be able to get access to the knowledge they need in fun and creative ways."

The CIC uses -- and teaches -- the methodology AWS uses itself in-house to develop products and services, such as the working backwards method that sees a press release written up before a product is even in development.

"The differentiator for us is we're going to focus not on cyber technology per say, but in really readiness of our people and then we'll see where it goes," Bean said.

Challenges will provide students with opportunities to build prototypes that address cyber threats, with a focus on enhancing awareness, literacy, and enablement across confidentiality, integrity, and availability.

"Our goal is to shuffle the deck," Bean said, when discussing what levels of students and researchers will be at the CIC.

"With these challenges, being able to have undergrad, post-grad, PhD, staff … I find creativity is not hierarchical and so by shuffling the deck what you end up doing is bringing a lot more creativity into the room.

"Some of the best ideas I've seen happen inside universities I find came from surprising places … the goal for us is to make sure we have lots of different types of students and staff and industry partners engaged."

Bean said it's RMIT's intention to work with other universities, including fellow Victorian institute Swinburne, at the CIC.

"Australian universities are very used to working in collaboration with each other … working with industry, etc," he said.

Appearing at re:Invent via video, Australian Education Minister Dan Tehan threw out a challenge to RMIT's CIC -- with the 200,000 graduates out of universities in Australia every year, what can RMIT do to turn them into "Cyber Ambassadors" so that they have the skills and competencies to carry forward into the world of work to help become the change-agents of the future.

The Cyber Ready CIC is scheduled to launch by mid-2020.

A MASTER OF ARTIFICIAL INTELLIGENCE

RMIT has a growing list of tech-related courses delivered through its RMIT Online division, but the university will be launching a new in-person course.

The RMIT Masters of AI is set to launch next year.

Bean said RMIT will be taking the Robomaker platform and using the programming of the cloud giant's autonomous robots course, as well as AWS Educate across some of the courses.

"They've allowed us to take their content, their experts, and embed that, just like we did with [Amazon] Sumerarian really upstream, and our students then being able to get access to all of those services, just makes the whole thing so much more forward-looking," he said.

This course, Bean explained, will be a more traditional, face-to-face taught.

"I didn't want anyone to think this is the only way this innovation can be brought into higher ed, or tertiary education is only online, because it's not … it's a great example of how you can mix and match, take content and tools and just plug them into a new program," he said.

"The next phase of the challenge to my sector is for the formal accredited sector to think about how we can embrace micro-credentials for the lifelong learner, because the interesting thing is the 18 to 20 -- we can't bet on the 18 to 24 year-olds alone," Bean continued. "We just don't have enough of them to keep pace with the demands that we've got in our in our communities for things like cyber skills."

The next battleground beyond just the tech skills, Bean said, is the "human skill".

"One great example, which I believe does need to thread across everything is ethics," he said.

"So if you take ethics as a human skill, I think every undergraduate needs to be exposed to ethical behaviour, because the [increased] human interactions with technology … the more we have to help the human understand what is right and appropriate, because just because the technology can do it, doesn't mean that we should allow it to do it.

"If you think about automated decision-making, before you turn the keys to the car over to the bots, you better make sure that those algorithms about the ethical side of that decision-making, is wired in, otherwise you just simply carry the bias into decision-making."

Touching on the promise of supercomputing in the cloud, Bean said RMIT is already leveraging AWS core services across the university

See also: AWS wants to reinvent the supercomputer, starting with the network

"What I'm interested to do immediately when I get home is to engage with my local AWS team … to really take a good look at what does that supercomputer offer look like, because that being applied to some of the real world problems and opportunities that RMIT is focused on could be really quite remarkable," he said.

"I think that sort of takes it to another level."