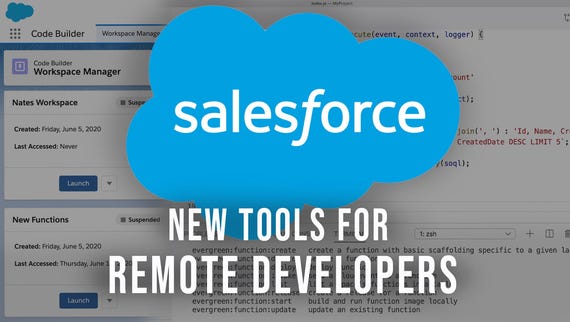 Salesforce wants to buy enterprise chat company Slack as part of a plan to expand its products for businesses, according to the Wall Street Journal.

The acquisition discussions were reported on Wednesday and follow Slack's difficulties in capitalizing on the shift to remote working during the COVID-19 pandemic.

The Wall Street Journal reports that a deal could be struck within days, possibly ahead of Salesforce's Q3 earnings report on December 1. Slack is also due to report its Q3 earnings on December 9.

Slack's revenues are based on the number of seats it sells to each customer. Its Q2 revenues took a hit from customers that have downsized or shut down as a result of the pandemic, as well as from spending cutbacks by larger customers.

Slack shares ended trading on Tuesday at $29.57, but shot up to $38.05 after news of acquisition talks. That's still below the $42 high on Slack's first day of trading last June. Slack's market value at current prices is $23bn dollars.

Reuters reports that Salesforce is looking to pay cash for Slack rather than trade its stock.

Salesforce is a dominant player in the customer relationship management (CRM) market and has partnered with Slack for years. It's also a competitor to Microsoft's Dynamics 365 CRM.

Unlike Zoom and Microsoft Teams, Slack hasn't benefited from the rise in demand for video meetings during the pandemic.

Both Salesforce apps enable business users to share customer data with colleagues, a task that is better suited to chat than video. So Salesforce could benefit from having control of its own enterprise messaging platform and from the hundreds of enterprise apps that integrate with Slack's chat functionality.

Times have changed since Microsoft launched Teams in 2016. Back then, Slack billed itself as an email killer and took a full-page ad in the New York Times welcoming competition from Teams.

Amid the first pandemic lockdown, Slack CEO Stewart Butterfield argued that "Teams is not a competitor to Slack". However, a few months later Slack complained to the EU competition regulator that Microsoft was illegally tying Teams to Office 365.

But even before the pandemic, Slack was in a difficult position. It was charging users between $80 and $150 per user per year for a chat app, while Microsoft charged $60 a year per user for Office 365 for its Business Premium tier, which included Exchange email, a terabyte of OneDrive for storage, Skype for Business, and Teams.