Samsung Electronics has posted 9.9 trillion won in operating profits for the first quarter of 2017 -- a rise of 48.3 percent from last year, the company said.

It is the firm's second-highest profit ever on record, and was largely achieved by its chip business, which contributed nearly two-thirds, or 6.32 trillion won.

Samsung's high-density chips allowed for higher average sale prices, despite a slower demand due to seasonality.

The South Korean tech giant is a leader in DRAM and NAND, both in market share and commercial technology levels, and soaked up a demand for datacenters, enterprise SSDs, and flagship smartphones.

In DRAMs, Samsung uses a 10-nanomter process and offers 48-layer V-NANDs, all ahead of rivals SK Hynix and Toshiba, allowing for higher margins.

The company expects steady profitability throughout the year from the business.

Samsung's mobile division saw 2.07 trillion won in operating profits, a drop both year-on-year and from the previous quarter due to falling price of the Galaxy S7 and S7 Edge. The launch of the mid-tier Galaxy A series helped steady profits, Samsung said.

Compared to profits of 2.74 trillion won a year ago, the profit drop is relatively flat despite the company ending the Galaxy Note 7 last year due to battery explosions.

The newly launched Galaxy S8 and Galaxy S8 Plus were showing robust initial sales and will help boost profits in the next quarter. Analysts are expecting Samsung to post record profits thanks to the new phones, coupled with strong performances in its memory business.

The display business, meanwhile, contributed 1.3 trillion won, thanks to strong demand for large LCD panels and small-sized flexibles for mid-tier clients. For the full year, Samsung expects greater shipments of OLED panels. This is likely due to its own supply for its flagship phones as well as the reported deal with Apple.

The company also announced its second share buyback. It will repurchase and cancel 900,000 common shares and 225,000 preferred shares starting in April 28 for a three-month period.

In its first share buyback, which was completed on April 12, it invested 2.45 trillion won that it repurchased, and cancelled 1.02 million common shares and 255,000 preferred shares.

Also, it announced the review of its corporate structure and said it will not be changing to a holding company, as some had suggested. 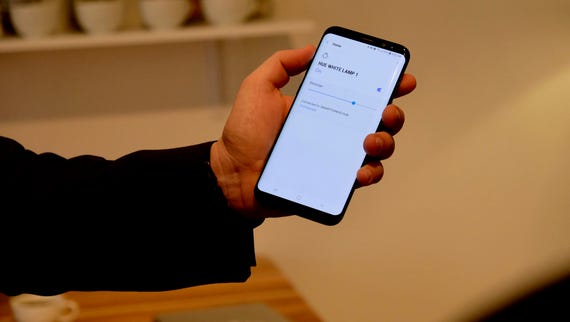